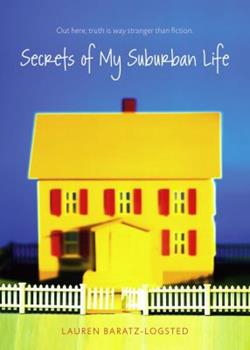 Secrets of My Suburban Life

And you thought your life had a dark side.... Everything changed for Lauren ("Ren") after Harry Potter killed her mom. No, it's not what you think--Harry Potter didn't come to life and stab her or anything. A stack of those thick books crushed her. Now Ren is stuck out in the suburbs of Connecticut, dragged out there because her father is too grief stricken to continue living in New York. Ren tries to fit in at her new school, but the most popular...

Love the protagonist, love the humor, love the book

Published by Thriftbooks.com User , 12 years ago
I'm going to bypass the summary because it's been done time and again here. I just want to say that I love this book by Lauren Baratz-Logsted. Ren is a great character dealing with common teen issues such as the ex-boyfriend and making new friends. However, there are some unexpected challenges such as her mother being killed by JK Rowling and her hunting down a child predator even though the prey is not so nice. It's a fun story with great humor, but there is a lingering cloud of a serious issue - our children being unsafe online. Very well-balanced. I'm looking forward to reading more by this author.

Published by Thriftbooks.com User , 13 years ago
SECRETS OF MY SUBURBAN LIFE by Lauren Baratz-Logsted Rating **** (4 Stars) February 23, 2008 This reviewer rarely ventures into the world of YA books and Teen Fiction, and was not aware that SECRETS OF MY SUBURBAN LIFE was just that - teen fiction. But there was no doubt about it, that this book was very funny and enjoyable and regardless of being Teen Fiction or not, it was very good. The story is narrated by Ren (Lauren), who is learning to deal with life with a single (widowed) Dad, moving to a new city, going to a new school, and trying to fit in with new friends. Ren's mother was a writer who happened to be killed by Harry Potter - a stack of Harry Potter books fell on top of Ren's mother and killed her. So, instead of continuing life in New York, Ren and her father, who also happened to be a writer, are now in the suburbs of Connecticut, which is very boring in comparison to New York. Farrin is the most popular girl in school. Ren and Farrin "connect" when Ren is forced to join the cheerleading squad (since Ren was a failure at all other sports, and every student was expected to participate on at least one sports team). They are also in some of the same classes, and it's during one of these classes that Ren learns an awful secret that Farrin has been keeping. It's so bad that Ren's life will change because of it. Farrin has been secretly communicating with an older man via the Internet, and Ren is afraid that Farrin is about to make a big mistake. Ren figures out a way to impersonate Farrin online to intercept the pervert, but the "joke" is on Ren when she finds out who this pervert is that Farrin is about to meet! The book is told from Ren's point of view, along with email communications between a girl (Sexgurl) and an older man (FDA), and Ren's letters to her mother, who she confides with and misses terribly. At times Ren appeared to be a lot older than her teen years, possibly because she's had to grow up that much faster after her mother died. SECRETS OF MY SUBURBAN LIFE is populated by all sorts of characters typical to the average teenager's life. Ren's got a best friend, Shannon, who she left behind in New York and misses a lot. Shannon, however, has moved on with her life, and has some secrets of her own. Ren's got a crush on Jack, the most popular guy in school, who unfortunately is dating Farrin. Jack and Ren do strike up a friendship, to the astonishment of Ren, and she is secretly hoping Jack may start to have feelings for her. But the competition is pretty fierce. What guy wouldn't want Farrin for a girlfriend? Luckily for Ren, she manages to get involved with Jack's family by mentoring his little sister Amanda, a girl who is as obnoxious as they can get. Ren can't believe that the two are even related. Through Amanda, Ren is able to hang out with Jack's family, and comes closer to him than she ever imagined. Ren is also making new friends at school, in particular T'Keyah who's related to a famous basketbal

Published by Thriftbooks.com User , 13 years ago
A lot has happened to Ren in the past few months...her mother has died (in the most unconventional way: crushed under a load of Harry Potter books), her father has moved them from their duplex in New York City to a regular house in the dreadfully boring suburb of Danbury, Connecticut, her best friend is barely returning her emails, and she is being ostracized by everyone at Waylord Academy. Everything in Danbury is the exact opposite of NYC. She is the only one who doesn't drive which causes her to resort to taking a cab everywhere via the small and often times unreliable Wheels Instead of Heels, and Waylord Academy requires every one of its students to participate in a sport. It is by default that she is thrown on to the cheerleading team, and into Farrin Farraway's evil clutches. Then Ren learns Farrin has a secret: she's been communicating with a mysterious older man online, and is planning to meet him. As much as she may despise Farrin, Ren can't bring herself to allow her to do this...especially when she thinks she might know who the man is. Secrets of My Suburban Life is a page-turner that will suck the reader in. Baratz-Logsted's style is unique, and stashed with subtle humor. Ren's reaction to her mother's death is wholly believable and raw, from her emotional state to her frequent letters addressed to her mother that give the story life, and her expressiveness and loyalty are to be admired, and make her character real. There is a pleasant balance between Ren's grief and friend problems, and the disaster that she is desperate to save Farrin from, which makes this story relatable and plausible. Every word will count in this heartrending, witty, and suspenseful novel. For more book reviews, author interviews, and contests, visit: [...]

A Smart Teeanger in an Unusual Situation Tries To Fit In, Fight Crime, Make Friends

Published by Thriftbooks.com User , 13 years ago
Ren D'Arc has an unusual name, and an even more unusual story: Her mom was killed when a set of Harry Potter books and her writer dad decides to uproot her from cushy New York City to cushy Danbury, Connecticut. Like any new kid, she struggles to fit in, while also missing her mom, dealing with a distant best friend back home, and befriending her new town's taxi drivers, who she uses exclusively for transportation. She becomes more and more distant from her father, especially when she starts to expect he may be up to no good. Ren is quirky and witty, sometimes seeming far older than her peers, but when she exults in the friendship that takes her a while to earn, or is forced to join the cheerleading team headed up by popular mean girl Farrin Farraway, it's also clear that she's a normal 16-year-old dealing with all the social problems a 16-year-old regularly deals with. But Ren's spunky and shows herself to excel at problem-solving, and her wry observations of her rich friend's parents, the sex predator she's trying to catch online, and the other adults in her life give her a sense of being wiser than her years. Lauren Baratz-Logsted has created a highly memorable character in Ren, and not just because of her unique circumstances. One gets the sense that even if Ren lived in a house with a white picket fence and mom and dad at home, she'd still be more than a little offbeat. She wants to fit in, but thankfully she doesn't go to outrageous lengths to do so, and instead finds herself and eccentric group of new friends who help her when she truly needs it. This humorous YA novel also has a message - well, actually more than one, and Ren had me rooting for her even as she walked right into situations that were clearly not going to go her way. She learns that being smart will get you lots of places, but having people you can rely on will get you even further.

Published by Thriftbooks.com User , 13 years ago
Just imagine living with the knowledge that J. K. Rowling, of Harry Potter fame, is responsible for your mother's death. That's the way Lauren "Ren" sees things. Her mother, a successful author in her own right, was researching for her latest book when the unthinkable happened - she was crushed by a pallet-load of Harry Potter books. After the unfortunate accident, Ren's father decides they should leave New York City and head to the suburbs of Connecticut. Upon arriving at their new home, Ren finds herself attending an exclusive private school called Waylord. She isn't exactly welcomed with open arms. Finding friends just adds to the complications of adjusting to her mother's sudden death. Perhaps it is her recent loss, along with an overactive imagination, that leads Ren into an unexpected situation. When she mistakenly picks up a classmate's notebook resembling her own, she learns that stuck-up, annoying Farrin is communicating in a chat room known as Sex World. The mysterious stranger appears to be an older man, and Farrin may be planning a meeting with him. The more Ren learns about this dangerous communication, the more she begins to suspect the mystery man could be someone she knows; that's when her own plan begins to take shape. Even after revealing significant facts, author Lauren Baratz-Logsted keeps the suspense flowing in Ren's story. Teens will enjoy the twists and turns as Ren tries to get comfortable in her new surroundings, develop new friendships, and discover the identity of the mysterious FDA. In her "Author's Note," Baratz-Logsted references an interesting website with statistics showing how quickly and easily online predators can access information about potential victims. Teens are warned to be careful and to be safe. Reviewed by: Sally Kruger, aka "Readingjunky"
Copyright © 2020 Thriftbooks.com Terms of Use | Privacy Policy | Do Not Sell My Personal Information | Accessibility Statement
ThriftBooks® and the ThriftBooks® logo are registered trademarks of Thrift Books Global, LLC