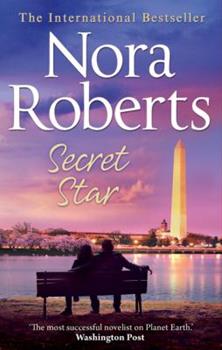 (Book #3 in the Stars of Mithra Series)

Secret Star by Nora Roberts released on Dec 25, 2000 is available now for purchase. This description may be from another edition of this product.

Wonderful ending to a great series.

Published by Thriftbooks.com User , 19 years ago
Thank you to Ms. Roberts for a wonderfully written series with three very different women. This book is a great conclusion to the Stars of Mithra series. Grace is believed to be dead, but she isn't. Police Lieutenant Seth Buchanan now has to try and keep her alive as the person who killed her cousin by mistake is still trying to get her. The characters in this novel could be real, and that makes this novel even more enjoyable. Ms. roberts has a talent for describing feelings in a way most can't. You will feel what the characters feel. Don't miss this dramatic conclusion. It will keep you guessing about one thing or another right to the end.

Ending to a great series!

Published by Thriftbooks.com User , 21 years ago
This final book was the best in the "Star" series. Grace is very wealthily, classy and upscale. Seth is a police Lieutenant. The ending to this book was like a fairy tale and was the perfect match. This series was great and I thought the combination made it all three were the perfect match A private investigator, a bounty hunter and now a cop. You will enjoy the series but do read them in order starting with Hidden Star. Enjoy!

Star Series is Wonderful- Nora Roberts has done it again

Published by Thriftbooks.com User , 21 years ago
I truly look forward to reading each and every Nora Roberts book I buy. This one was no exception. Grace is a very rich lady who does many good deeds. I had a hard time relating to her character. However, I feel that Nora Roberts does a very good job of developing it in pieces so that you can slowly get to know the full person behind the money. Seth is the cop working to solve a murder. The mystery and intrigue this book provides was wonderful. I particularly liked the ending in this book. I thought it was fairly true to how I would act in a similar situation. (Would that I were so rich!) Although this book can stand alone, the first two book in the star series will provide background on some of the characters involved. I would suggest that you read all three in order.

A great end to a great series

Published by Thriftbooks.com User , 23 years ago
I found all three of the Stars of Mithra series in a bookcase at my local library that sells unmarked paperbacks for 15-cents apiece. Talk about buried treasure! I got a great trilogy for 45-cents!Secret Star is definitely my favorite of the three. The first two were great, but Seth's and Grace's story was the topper. Seth and Grace were definitely the most dynamic couple of the three (although I certainly also enjoyed Cade and Bailey and Jack and MJ). Seth went from a rules-are-my-life, police-have-all-the-answers, can-do-it-all, know-it-all uptight jerk to a lovely man capable of learning from his mistakes and admitting that he can use help, even from a PI and a bounty-hunter. With Grace, Nora Roberts peeled away the layers of her personality and showed that her gold-plated exterior shields a big-hearted, vulnerable woman you'd love to have for a friend.On the downside, I thought it unnecessary to allude to past lives and previous adventures with the Stars of Mithra (much more pronounced in this conclusion than in the first two books) and felt that the race to protect the jewels and unmask the villain and his cohorts could have stood on its own. A once-in-a-lifetime adventure appeals much more to the romantic in me than the silliness and fantasy of past lives. Fantasy fiction has its place, and I do enjoy it, but I don't like it unnecessarily mixed into what should be purely contemporary adventures.But that's nitpicking. Overall, this series is a great read and I highly recommend it. Great work, Nora!

by far, the best of the three

Published by Thriftbooks.com User , 23 years ago
this was soooo much better than the other 2! the development of the characters paid off in my opinion. after reading the first two, i debated as to wheather i should read the last, and decided to give it a go...it couldnt have been much worse could it. im glad i did, as it was a treat!! ::smile
Trustpilot
Copyright © 2022 Thriftbooks.com Terms of Use | Privacy Policy | Do Not Sell or Share My Personal Information | Accessibility Statement
ThriftBooks® and the ThriftBooks® logo are registered trademarks of Thrift Books Global, LLC