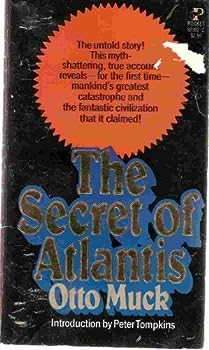 Book by Otto Muck This description may be from another edition of this product.

Published by Thriftbooks.com User , 14 years ago
This is the book that got me interested in Atlantis almost twenty-five years ago. Mr. Muck backs his ideas and theories with solid evidence that whetted my appetite for anything Atlantis oriented. It's a "must read" for anyone who is interested in the subject, especially since it's based on provable History, Archeology, Science, and Mythology, and not "iffy" ideas. It was added long ago to my personal library.

Published by Thriftbooks.com User , 14 years ago
I read this book maybe 20, 25 years ago, after finding it browsing in the local library, and for ME, the "secret" of Atlantis was pretty much a resolved question from that point forward... Not that Muck necessarily had all his science right (especially considering he wrote this book at a time not even the Big Bang theory had been "proven" over the Steady State theory of the universe), but that I DO believe he proved a small comet or meteorite hit in North America and probably bouncing into the Atlantic 10-12,000 years ago. I JUST finished watching a new, 2-hour show on the History Channel about the origins of Clovis Man on North America and the "curiosity" about why and how both Clovis AND 80% of all large land mammals on North America suddenly VANISHED about 13,000 years ago, and then about 2,000 years later, they start seeing human artifacts again... Ice cor samples revealed that just as the ice age was retreating, allowing humans to setle North America, a second, shorter "ice age" of about 1,000 years QUICKLY descended upon the planet, and Alan West of the University of Michigan has discovered microscopic metalic balls and "microdiamonds" at the level at that EXACT point in the geologic layer ALL OVER NORTH AMERICA that indicate the distribution of materials from a comet or meteorite -- materials that RARELY exist anywhere but in OUTER SPACE. Of course he apparently never heard of Otto Muck, and he thinks his idea is ALL NEW and that said meteorite hit the ice mass in Canada, and he could be right -- or they BOTH could be wrong... But that book made a LASTING impression on me -- so much that some 20, 25 years later, before they even SAID where they were going with the idea, I already knew (he proposed his meteor idea LONG BEFORE anyone DARED SUGGEST a meteor impact killed off the dinosaurs). I've thought of this book and told people about it literally hundreds of times through the years. I'd say "The Secret of Atlantis" was DECADES ahead of its time -- perhaps a bit heavy on the speculation by someone who was reaching beyond the science of his day, but a VERY insightful, prescient work! Jeff Hayes

The best book written on Atlantis

Published by Thriftbooks.com User , 15 years ago
It's not even a close call. This is easily the best book ever written on Atlantis. Speculation is kept to a minimum while scientific analysis prevails. Muck surveys ocean currents, plant and animal distributions and geological evidence and concldues that there is no other scientific explanation available---there must have been a large island or small continet in the Atlantic that has disappeared.

Published by Thriftbooks.com User , 21 years ago
If you read any one book on the topic of Atlantis, this should be it. It's a scholarly work that covers scientific ground that no one else even thinks to tackle. In particular, the late Dr. Muck's discussion of the Gulf Stream and climatologic evidence is persuasive. (It should be tested against the hypothesis of a polar axial shift to ensure validity with regard to location of currents vis a vis the Gulf Stream. His same ideas and techniques applied to Siberia could add further weight to the axial displacement hypothesis as well, or refute it.) More recent evidence about the astronomic event that shattered a small comet or asteroid into over half a million pieces, crossed North America from Alaska and crashed into the Sargasso Sea during the correct time frame (as evidenced by the "Carolina Bays") fully supports Muck's thesis and lends greater credibility to it. This out of print book should be reissued!

example of one clever book

Published by Thriftbooks.com User , 24 years ago
I have this book for several years and this one of the best in this subject. Author writes very seriously and gives you very good thesis. Anyone should consider this book as one serious aproach which is giving the right arguments. It is impossible to deny what author says. I warmly recommend this book!
Trustpilot
Copyright © 2022 Thriftbooks.com Terms of Use | Privacy Policy | Do Not Sell or Share My Personal Information | Accessibility Statement
ThriftBooks® and the ThriftBooks® logo are registered trademarks of Thrift Books Global, LLC