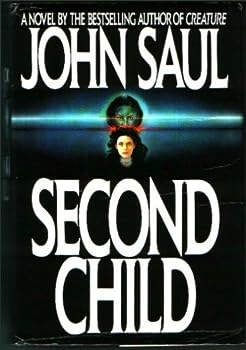 One hundred years ago, in the beautiful village of Secret Cove, Maine, on the night of the annual August Moon Ball, a shy and lovely servant girl committed an act so unspeakably violent that its legacy still lives. Now, the blood-drenched past of this small town is about to come to life once more--just in time for this year's August Moon Ball.

One of My Favorite John Saul Books

Published by Thriftbooks.com User , 18 years ago
After killing her parents in a house fire in San Fernando, California, 14-year-old Teri MacIver is taken in by her real father and his family (wife: Phyllis; daughter: Melissa) in affluent Secret Cove, Maine. While "Second Child" begins with Teri, it's her half sister (Melissa Holloway) that's more of the protagonist--or at least the one the reader feels the most sympathy for. Both girls have their own secrets--Teri's being she's a killer, and Melissa's being she has an imaginary friend (D'Arcy) that's actually a ghost who resides in the attic, inhabiting Melissa's body whenever her abusive mother punishes her, which is quite often. Once Teri discovers this secret, she uses Melissa's weak mental health to her advantage, hoping to knock her out of the picture so she can have the kind of life she thinks she deserves, in Melissa's place.I read "Second Child" either in middle or high school (I don't remember which), so it's appropriate for readers that young, since they can probably relate easier to the teen characters in this book. Like most of Saul's books, "Second Child" has a supernatural twist to it, linking D'Arcy to events that happened 100 years ago in Secret Cove. Horror fans should definitely like this one.

Published by Thriftbooks.com User , 19 years ago
I loved this book! It starts out great and doesn't stop there. Although it does have some supernatural twists to it, the book is more of a "good guy gets screwed by bad guy" type of novel. Unfortunatley, as one reviewer commented, it does leave some wondering to the imagination at the conclusion. However, as with any book, most are left to wonder, and I still think this is one of (if not the best) Saul novel to date.

It will scare you to death!

Published by Thriftbooks.com User , 22 years ago
I read this book almost a year ago. I had a lot of time on my hands (I was pregnant and not working) and it only took me like two days to read Second Child. I am a fan of John Saul's other works and Second Child proved to be worthy of praise as well as Saul's other novels. Terry made me so mad! She definitely got what was coming to her in the end!

If you dont love it you've got problems. But thats ok.

Published by Thriftbooks.com User , 22 years ago
This was the firstbook I've read by John Saul & it took me less than a week to read. It was what was written on the back that made me read it. You will be compelled too.

The novel scared me out of my witts. I've been so afraid.

Published by Thriftbooks.com User , 23 years ago
Second Child by John Saul was the most chilling book I've ever read. It kept my attention and wouldn't let go. This was writting at its best. Phylis was the very personification of the overbearing mother. I felt sorry for Melissa throughout the whole novel, and Terry got what she deserved at the end. I loved it, and my friends loved it too. I would recommend this book to anyone.
Copyright © 2020 Thriftbooks.com Terms of Use | Privacy Policy | Do Not Sell My Personal Information | Accessibility Statement
ThriftBooks® and the ThriftBooks® logo are registered trademarks of Thrift Books Global, LLC