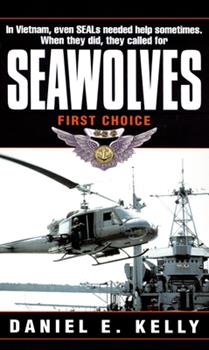 They called themselves Seawolves . . . The men of SEALs, PBRs, and SF called them saviors . . . Created in 1967, the HAL-3 helicopter squadron--aka Seawolves--provided quick-reaction close air support to SEALs, PBR River Rats, and Special Forces advisers and their troops. During the five years of the unit's existence, the seven detachments of Seawolves amassed stunning statistics: 78,000 missions, 8,200 enemy kills, 8,700 sampans sunk, and 9,500 structures...

Published by Thriftbooks.com User , 22 years ago
Boat? What boat -- I find Kelly's accounts 1% inflated and 99% accurate -- Having flown for several tours as a door gunner in HAL(3) - AND having FIRST HAND knowledge of the air cav - I can only guess that "Al Server" must be the younger brother of a REAL AIR CAV gunner/crewchief and took every one of his older brothers war stories and ran them through his non-combatant imagination -- If the reason to write a book and put it on the open market is to then SELL the book --then Kelly has hit the mark with his cutting edge wit and his honest portrayal of HIS experiences -- The market for a dry tale of dusty wet drudgery interupted by moments of sheer terror and war time humor is much better in its truth than your poor attempt at reviewing something it seems you know nothing about -- a certain author of a casual tale - Rogue Warrior - would be interested in your view point about SEALS and Seawolves-- why don't you tell him in your review of HIS book that he is just a "TALL ARVN" -- Kellys book is an excellent example of OUR expiernces -I applaud him --- "Stretch" -Det 7 1967'68'69 --

Published by Thriftbooks.com User , 23 years ago
I thought that this book by Dan Kelly was about as close to real as could be told. I was a doorgunner with the Seawolves at the same time as Dan, however, at a different detachment. His experiences, although different, brought back similar experieces that I had gone through. The baptism of fire in earning Combat Aircrew wings was similar throughout each Seawolf detachment. The spirit that embodied the Navy Seawolves was living thing no matter in what detachment you served. Our one mission, as far as the pilots and gunners were concerned was to not leave any comrads on the ground or in trouble. Our history, as detailed in Dan's book, bears this action out. As I read it, I got goose bumps and very emotional just thinking about the past. A very good read.

Published by Thriftbooks.com User , 24 years ago
This book is one of the best there is on Helicopter warfare in Vietnam. Even though I am a 35 year old woman and don't have much military history to lean on, this book was easy to read, exciting and hard to put down. I recommend this book to anyone who flew in gunships, is a true Vietnam Veteran, or who is just interested in helicopters in Vietnam. Dan Kelly's experience with the Navy's Sea Wolves in Vietnam is more than what most people can handle in a lifetime. Suffering two painful injuries and serving two tours of duty and flying as door gunner through some of the most horrendous circumstances is the stuff heros are made of. The fact that he stresses going to Vietnam was *his choice*, and choosing the Sea Wolves was *his choice* shows you just what kind of man Dan Kelly is. It also shows you what kind of men flew with the Sea Wolves: The men you want to rescue you when you are in deep trouble. The men of the Sea Wolves were the kind of men you knew you could count on when you needed them. I'd be proud to fly with them anyday. Buy this book if you have the guts to fly along. You will re-learn what you may have forgotten about honor and heroism.

This is as real as it gets!

Published by Thriftbooks.com User , 24 years ago
If your son, father, brother or friend flew gunships in 'Nam, read this book and look at them in a whole new way. Dan Kelly's book tells about a group of men that most have never heard of, unless they were Seals, PBR sailors or Special Forces in the Mekong Delta. I was priviliged to be a member of the Seawolves' support unit at Binh Thuy. I saw them go out and I saw them come back. Once in a while I got to see them "work out" from the deck of a boat. Watching them roll in on their "loop de loop" and seeing the results was a sight I'll never forget. Dan takes you along on a scramble to experience what few men ever do. Reading this book I began to smell the sour mud, jet fuel and cordite that infused this green-brown world I left behind many years ago. Forget Rambo, These are the guys that really did the job. They were my heroes then and they still are today. This would make one helluva' movie.

One of the best books on the Vietnam War that I've read.

Published by Thriftbooks.com User , 24 years ago
Dan Kelly has provided us with an extremely well written autobiography of his life with as a Seawolf. The book is articulate, very well thought out, contains sadness, empathy, glory, and pain. As a work it reads like fiction, easy to understand with an excellant storyline. His story of the Seawolves, as seen from the point of view of a 20 year old Crew Chief/Gunner is exceptionally factual and accurate. I know, I too was a Seawolf
Trustpilot
Copyright © 2022 Thriftbooks.com Terms of Use | Privacy Policy | Do Not Sell My Personal Information | Cookie Preferences | Accessibility Statement
ThriftBooks® and the ThriftBooks® logo are registered trademarks of Thrift Books Global, LLC