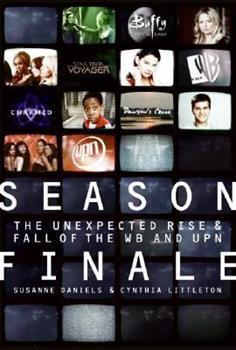 Season Finale: The Unexpected Rise and Fall of the WB and UPN

by Susanne Daniels and Cynthia Littleton

A former network executive and a Hollywood Reporter journalist trace the halting rise--and precipitous fall--of the twin TV networks of the 1990s, UPN and the WB.

Published by Thriftbooks.com User , 14 years ago
This book provides a really interesting look into television's recent history, from the beginning of UPN and the WB to their merger to create the CW. Some people may find it a little dry about the making of the sausage that is network programming, but if you're curious how network TV is made, this is the book for you. I only found two things that really bug me about this book. The first is nothing the author could have gotten around: it's a lot more about the WB than UPN, since she worked at the WB. The second is that the book ended a little bit early. It could have stood to go into just a little bit about the first couple of months for the CW. It also completely glosses over MyNetworkTV, but that network is so much different than the others that it could be a book of its own. Finally, I believe I can answer one question that might really stick out near the end of the book: why one Acme Communications station didn't go with the CW. The answer is quite simple: all but one of those stations was a WB affiliate, including one in Albuquerque. The other station, Acme's UPN affiliate, is also in Albuquerque, so it would have made no sense to make two Albuquerque CW affiliates. That UPN affiliate went with MyNetworkTV instead.

Published by Thriftbooks.com User , 15 years ago
This book came completely unexpected, but should be become a vital addition into any library of television history. The authors delve into the agonizing yet somewhat ridiculous corporate wranglings, deals, double-deals, backstabbings and outright stupidity between two rival networks. Their bad timing was incredible; it seems at times that both networks are hanging on by a string...and yet...out of the chaos came some of the most genuinely wonderful shows that were very reflective of their generation. I will add a laundry list here, because in this book you will read about the birth and death of: Buffy the Vampire Slayer, Seventh Heaven, Angel, Star Trek Voyager, Popular, Roswell, Dawson's Creek, Sister Sister, Steve Harvey, Savannah, Felicity, Charmed, Girlfriends, Veronica Mars, Everybody Hates Chris, Smallville, Reba, Everwood, One Tree Hill, and of course, Muscle and WWE Smackdown! Through it all you will wonder why the two rival networks just didn't combine into one, and you will not care by the time they finally do. It's a fascinating and thorough account of what went wrong with dueling networks; but also of the fantastic shows that came and went regardless.

Published by Thriftbooks.com User , 15 years ago
Though I usually don't enjoy books about TV shows I don't watch, I was quite pleasantly surprised in reading Season Finale. The authors strike just the right balance between 'breezy' and 'hard facts' to make this a fascinating and fun read. The story of UPN's launch party in New York alone is worth the time! Highly recommended!
Trustpilot
Copyright © 2022 Thriftbooks.com Terms of Use | Privacy Policy | Do Not Sell My Personal Information | Cookie Preferences | Accessibility Statement
ThriftBooks® and the ThriftBooks® logo are registered trademarks of Thrift Books Global, LLC