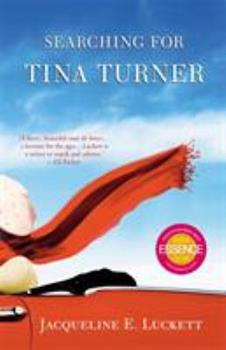 On the surface, Lena Spencer appears to have it all. She and her wealthy husband Randall have two wonderful children, and they live a life of luxury. In reality, however, Lena finds that happiness is elusive. Randall is emotionally distant, her son has developed a drug habit, and her daughter is disgusted by her mother's "overbearing behavior." When Randall decides that he's had enough of marriage counseling, he offers his wife an ultimatum: "Be grateful...

Published by Thriftbooks.com User , 12 years ago
Searching For Tina Turner I have gotten to used to easy reads. Things I could read easily without much effort, not much of a challenge. Easy words, simple subject matter or same subject different title. So when I started reading Searching For Tina Turner, I hate to say I was expecting same topic different day. What a pleasant surprise. At first, it reminded me of Terry McMilan.. I love complex books that make you think and feel and identify with the characters and subject, and make you read slow to savor the favor. Lena grabbed me into her world. Always doing and settling and waiting for her turn to live. She has a great life, a hubby, two kids and a dream. She really doesn't want much, all she wants is to be herself and do what she's always dreamed of. She wants to do something that makes her feel. She has become uncomfortable in her own skin and circumstance and starts reminiscing of better days and Tina Turner. Discontentment makes you do things to satisfy an urge. It also makes you feel disconnected to your self. Lena is tried of waiting for her turn and takes it. She leaves her "perfect" life to satisfy her life long dream that was always being put on hold. She decides to embark on a journey to find herself and Tina Turner. The people who she's put her life on hold for are not getting that she has to do this for her, and it's not about them. Lena jets off to Europe with a friend and a camera and Tina's sprit in her heart. She has tickets to see her in concert and while waiting for that day, she starts to discover the Lena , she has always wanted to be. I loved this book. I call a grown woman read. It's about taking your control back and about being uncomfortable in a too comfortable situation. 5*****

Published by Thriftbooks.com User , 12 years ago
Even though it moves quickly, Searching for Tina Turner isn't a book that you read in one sitting. It's worth following the characters and savoring the changes and realizations that Lena goes through. The book opens with Lena watching Tina Turner dancing on TV. She's brought back to the memory of her courtship with Randall and since she misses him badly, she calls to tell him how she's thinking of him. He's in Hong Kong and it's 4 am and he's in the middle of a deal. At that moment, I'm fully behind Randall when he rebukes her. But Jacqueline Luckett is great at creating full bodied and authentic characters, so that we understand their motivations, strengths and flaws. As Searching For Tina Turner progresses and Luckett reveals more about Lena, her life of luxury, and the accommodations that she's made for her husband, her children, and her friends, the story blossoms, Lena comes very much alive and I couldn't help cheer her on. Searching for Tina Turner is a story of a woman who was willing to give up everything that she had and to start over - it's a story of facing fears, gaining courage and being true to yourself. ISBN-10: 0446542962 - Hardcover $24.99 Publisher: Grand Central Publishing (January 27, 2010), 320 pages. Review copy provided by the publisher.

A book about finding yourself

Published by Thriftbooks.com User , 12 years ago
As the highest ranking black employee of TIDA, it seemed that Randall had it all. Even though he enjoyed the power and the money the position brought, for him it wasn't enough, and he didn't intend to stop until he became the CEO. The fact that his wife, Lena, had made sacrifices and given up her dreams for years, didn't seem to matter to him. While Randall is on a long business trip, Lena falls into a funk. No one can understand why she's not happy since she has everything money can buy. But Lena wants more - she wants to do something for herself for a change. When she buys a copy of Tina Turner's autobiography, she finds strength in the singer's life, and decides that she has to meet her. Searching for Tina Turner by Jacqueline E. Luckett was a more serious book than I presumed from the title. As someone who has put her husband's career and her child's well being first, I could really relate to Lena. I'm lucky though, because my husband is supportive and considerate of me and my wishes, unlike Randall. I'm here to tell you, I had quite a conversation with Randall while I read this book. I told him a thing or two and called him a thing or two. At one point, Carl looked at me, and said, "it's only a book." I've met several men like Randall through the years, and I didn't like a single one of them. I really enjoyed Searching for Tina Turner and I loved that Lena found her inner strength and stayed true to herself. She learned to let go and not try to do everything for everyone and actually let someone do something for her from time to time. I do think this book will probably appeal more to middle aged women.

Published by Thriftbooks.com User , 12 years ago
This was an over all good book. It is very entertaining and it delves into the women's point of view on an ending marriage. The main character, Lena, gives her husband an ultimatium and when he doesn't give into her ultimatium, she womans up. Having gone through something similar, I could definitely relate to and feel Lena's struggles. I was rooting for her and clapping her on. I definitely recommend this for a great and entertaining read to all the women out there! I give Jacqueline a 4 star rating for her writing skills, characters and the wonderful plot! *A copy of this book was provided for review by Hachette Book Group*

Published by Thriftbooks.com User , 12 years ago
In Oakland, wealthy Randall and Lena Spencer and their two children seemed to live the perfect family life. However, Lena who gave up her photography career to support her business executive husband as he worked his way up and to raise their two kids feels lonely and unfulfilled. She persuades Randall to go to marriage counseling, but he quits rather quickly and warns her to shape up as she should be grateful to what he has done for her over the two decades plus of marriage ignoring what she has done for him. While Randall is on a business trip, a fuming Lena reads Tina Turner's autobiography with her focus on the rock star's life after kicking Ike to the curb. Knowing Randall is not the man she loved and married as he unsupportive but not physically abusive, Lena decides to call his bluff and they separate. The teens prefer affluence so they stay with dad; hurting her more that they chose materialism. She obtains a position at an art gallery and travels to France hoping to meet Tina, but instead runs into Harmon who dumped Lena for someone else years ago. They share sex and he proposes having always regretted his mistake even as Randall arrives to beg her come home. Searching for Tina Turner is a charming interesting contemporary tale that looks closely at self actuation inside of family dynamics. The story line is driven by Lena, who ironically feels Randall does not listen to her needs while ignoring his side of the argument; just like he does hers. Although she never has to give up her luxurious lifestyle after leaving Randall (flying and staying in Nice, France cannot be cheap), readers will enjoy Lena's quest to find her self starting with moving out and seeking out her muse. Harriet Klausner
Trustpilot
Copyright © 2022 Thriftbooks.com Terms of Use | Privacy Policy | Do Not Sell My Personal Information | Accessibility Statement
ThriftBooks® and the ThriftBooks® logo are registered trademarks of Thrift Books Global, LLC