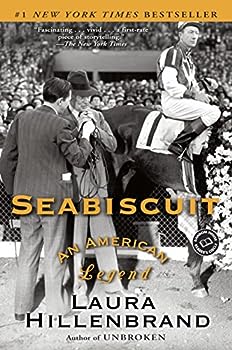 #1 NEW YORK TIMES BESTSELLER - From the author of the runaway phenomenon Unbroken comes a universal underdog story about the horse who came out of nowhere to become a legend. Seabiscuit was one of the... This description may be from another edition of this product.

Running with your heart

Published by Thriftbooks.com User , 19 years ago
Seabiscuit's "gallop was so disorganized that he had a maddening tendency to whack himself in the front ankle with his own hind hoof." And so the spell-binding story about a horse that runs with a duck waddle, a jockey (Red Pollard) who is blind in one eye, a trainer (Tom Smith) who is practically mute, and an owner (Charles Howard) who brought cars to the West is born. This unlikely group of misfits joins together through chance -- and because all three men immediately see the untapped potential in a mistreated, high-spirited, and lazy horse named Seabiscuit. This trio devotes their love, skills, and energy into turning Seabiscuit into one of the most phenomenal horse racing legends.Tom Smith, perhaps the original "horsewhisperer", spends hours learning and understanding his horse. When Seabiscuit is first put into his care for training, the horse is nervous, paces incessantly, weighs too little, and suffers from a sore body. Tom spends time caring for Seabiscuit, showering him with affection and carrots, even sleeping in Seabiscuit's stall at night. A daily routine is introduced plus animal companionship. Before long, Seabiscuit has his own entourage: a cow pony named Pumpkin, the little stray dog Pocatell, and Jojo the spider monkey. Under Tom's care, the high-spirited Seabiscuit learns to trust, becomes calm, and, most importantly, starts winning horse races. The triumph of Seabiscuit is ultimately the story of what any person (or animal) may accomplish when their talents are recognized, supported, and expanded. Seabiscuit, given his inauspicious start in life, could just as easily have faded away into non-existence running third tier races. However, the love and care he receives from his owner, jockey, and trainer have you cheering until the end of the book for Seabiscuit to keep running (and winning) with his heart. Not only does Seabiscuit capture the hearts of the misfit trio, he will capture yours.

A Celebration of an Epoch in American History! Wonderful!

Published by Thriftbooks.com User , 19 years ago
This fascinating work of non-fiction is one of the best books I've read in a long time. Unlike a lot of historical non-fiction, this intriguing story did not read like a textbook - it read like fiction and not once did I find myself skimming the details ... too interesting to skim through!When I first heard about this story, I wasn't sure about it - after all, I really know (or should I say "knew") very little about horse racing. Despite my misgivings, I soon realized that a major purpose of this book was not only to teach the reader about this sport via Seabiscuit's career but also to memorialize the amazing individuals (Charles Howard, Tom Smith, Red Pollard, George Woolf, etc.) who defied all odds to make such a successful racing career possible.I especially liked the chapters dealing with the difficulties of life as a jockey - the way the jockeys punished their bodies to the extreme for the honor of participating in a harrowingly dangerous sport was truly unbelievable...and I thought ballerinas were harsh on their bodies when it came to weight loss! Red was my favorite character and I can't help wondering if the author felt a particular kinship with the jockey as a result of her own struggles with Chronic Fatigue Syndrome - after all, she did have to push her own body beyond her normal physical limits to complete her research and write this amazing book! Ms. Hillenbrand successfully incorporated the story of Seabiscuit's racing career into the historical context of the era. Seabiscuit was a much needed diversion for Americans who were suffering the depths of the Great Depression. ...And perhaps, through Laura Hillenbrand, Team Seabiscuit is still providing us all with an inspirational diversion from today's distressing headlines! Oh - and don't skip the interview with Laura Hillenbrand at the end of the book. It was very interesting to see how Ms. Hillenbrand's own background influenced her writing and how her research helped her to resurrect this intriguing epoch in American history.I'm excited about the movie although I hope Universal Studios does this wonderful literary work justice!

Published by Thriftbooks.com User , 20 years ago
It's hard to determine the true hero of this book. Is it the taciturn trainer, Tom Smith, who took a colt the worlds leading trainer (the still-revered Sunny Jim Fitzsimmons) couldn't truly fathom and turn the reject into a champion racehorse? Is it Charles Howard, the car salesman turned millionaire who devoted so much of his time, money and energy to his beloved horse, never second-guessing his trainer and remaining ever steadfast in every adversity, including the death of his son? Is it Seabiscuit himself, the reluctant claimer who went on to a superstardom that matched or superseded anything later achieved by Michael Jordan or Tiger Woods? Perhaps it is Johnny (Red) Pollard, the jockey who emerged from depths about as low as any human being can go to the winner's circle in America's most prestigious races? All of these would be strong candidates, but my Eclipse Award goes to Laura Hillenbrand, for rising up out of her sickbed often enough and long enough to accomplish something just as miraculous as the feats that Seabiscuit and team pulled off. Take it from someone who spent six years of his life as an observer and worker at backstretches all around this country. I have held jobs from hot walker to trainer, at venues such as Belmont Park, Gulfstream, Santa Anita, Bowie, The Fairgrounds, Monmouth Park, etc. I also had a chance to observe some excellent horsemen for whom I worked, including Frank Whitely, Elliot Burch, Woody Stephens, and others. I had the pleasure to meet and talk with Alfred Vanderbilt, one of the characters in this story, as he was an owner of one of the trainers for whom I groomed horses. I?ve seen most of what the backstretch has to offer, from the lowliest stable-hand at a rickety bullring track in New Mexico, to the richest owner in the world purchasing horses at the Keeneland Yearling Sale. So perhaps I feel myself qualified, though it is hardly necessary, to say that Laura Hillenbrand has written the book I wish I had had the talent and fortitude to write. Her book, more than any other I have ever read, captures life on the backstretch as it is, was, and ever shall be. She has gotten to the essence of horse-racing, capturing perfectly the allure, the dreams, the utter exhilaration and despair that unfolds day in and day out behind the scenes at racetracks the world over. She has done this despite severe physical infirmities that would have stopped us lesser humans in our tracks. Reading this book left me feeling as though I had just won the pick-four at Hollywood Park. Hats off and thrown high into the air to Laura Hillenbrand for an accomplishment that will be next to impossible to match.

The Winner's Circle for "Seabiscuit"

Published by Thriftbooks.com User , 21 years ago
There are certain books you will be lucky enough to read in your life that will make an everlasting impression. "Seabiscuit" by Laura Hillenbrand is most definitely one of those rare books.You do not have to be a horse racing afficionado, nor a sports fan to absolutely love this story. It brings back the life and times of an unlikely group of people and animals in early 20th Century America in such a way that you will find yourself completely mesmerized as the events unfold. If you believe that "Truth can be stanger than fiction" you will understand that such were the details of these amazing characters that no fable could equal.I ABSOLUTELY loved this book and would recommend it to anyone who loves tragedy and triumph as told by a master writer such as Laura Hillenbrand. It had me on the edge of my seat rooting and cheering as if I was actually witnessing the spectacular events that had so many Americans hypnotized during the height of the Great Depression. I "cashed a WIN-ticket" when I bought and read "Seabiscuit"

The most engrossing book I have read in 5 years

Published by Thriftbooks.com User , 21 years ago
Let me say a few things up front: I have never set foot on a racetrack, I have watched the Kentucky Derby maybe twice on TV and I have little interest in jockeys, horse trainers or horses in general. For those who think this is a book about a racehorse, think again. It is a wonderful, descriptive work about the underdog, about triumph over adversity, about personality in animals and, most importantly, about a rarely discussed slice of America.With a keen sportswriters eye toward detail as well as broader context, Ms. Hillenbrand has written a vivid description of an amazing animal, the three men around him and an era in American sports and history. Seabiscuit was a fascinating creature, not only for his deceptive power but for his playful, competitive nature. Ms. Hillenbrand helps us understand this horse as a person - a person you instinctively root for. His owner, a self-made success in the automobile industry, displays concern for the horse as if it were a child. Seabiscuit's trainer embodied the western spirit and had an uncanny bond with the horse - he was a real-life horse whisperer. Finally, the harrowing, rough and tumble life of a jockey during the 1930's is painted here with unsympathetic accuracy, as we learn about the trials of Red Pollard. Seabiscuit was the hub of these three lives and their extraordinary accomplishment on the racetrack.The book builds toward two climaxes - the match race against War Admiral (which Ms. Hillenbrand desribes in such wonderful detail) and the ever elusive Santa Anita Handicap. Although historical, the book has a novel-like suspense that keeps the uninformed reader rapt and engrossed. This book, which describes the regional split between east and west coast race horses, really describes the potential and scrappy nature of the American west. Thank you, Ms. Hillenbrand, for such a terrific read.
Trustpilot
Copyright © 2022 Thriftbooks.com Terms of Use | Privacy Policy | Do Not Sell or Share My Personal Information | Accessibility Statement
ThriftBooks® and the ThriftBooks® logo are registered trademarks of Thrift Books Global, LLC