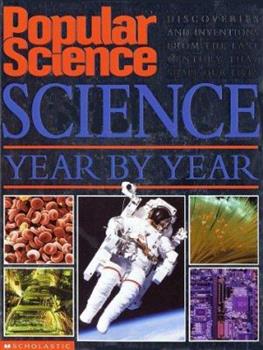 The 20th century yielded dramatic and profound advances in science and technology. Packed with photos, illustrations, and intriguing narrative, Science Year by Year--a handsome, informative resource... This description may be from another edition of this product.

Published by Thriftbooks.com User , 17 years ago
My 8-year old third-grader brought this book home from the library at school and now the whole family is now fighting over who gets to read it first. My husband and son are both math and science guys...they eat this stuff up. Science doesn't overly interest me, but I was SO IMPRESSED with this book. It's really a history lesson on the science & product developments of the 20th century and how they affected society. Plenty of picture illustrations + about a paragraph of text on each entry. Would make a GREAT gift.

A beautiful, well-produced book -discuss it with your kids.

Published by Thriftbooks.com User , 19 years ago
Most people don't realize it, but the dramatic inventions of the 20th Century are matched by the perhaps even more remarkable discoveries of the 18th and 19th Centuries, remarkable in the sense that they unexpectedly uncovered whole new scientific principles and capabilities. The spectacular discoveries we now see all around us - space travel, electronics, electronic communication, music recording, are often applications of basic principles developed in earlier times. Developments of the 20th Century that are truly unique include radioactivity and nuclear physics, harnessing the molecular properties of semiconductors to explode the development of computers and "smart" devices, and spectacular investigations deep into the ocean and earth crust. In 1900 the earth was regarded by Lord Kelvin, a science superstar, to be around 500,000 years old. After World War II an age of 4.5 billion years became well established. Popular Science has dug deep into the 20th Centuries discoveries, giving nearly year-by-year accounts (some well known, others not), jammed with well-done illustrations. It's a thoughtful job, so detailed that I am including aspects of it in some serious science policy research - yet so colorfully illustrated that it may be hard for adults in professional scientific or engineerinig fields to take it seriously. The best way to exploit such a fine volume, therefore, is to not just give it as a present to kids in high school, but to sit down with them and look and talk about some of the work and its implications. Older buyers can identify with the earlier - mid 20th Century developments and discuss with young people the lifestyle changes that have come about partly because of them. I argue that computer communications, by speeding up and crowding human life, may have introduced severe negative effects offesetting the obvious advantages.
Trustpilot
Copyright © 2022 Thriftbooks.com Terms of Use | Privacy Policy | Do Not Sell My Personal Information | Accessibility Statement
ThriftBooks® and the ThriftBooks® logo are registered trademarks of Thrift Books Global, LLC