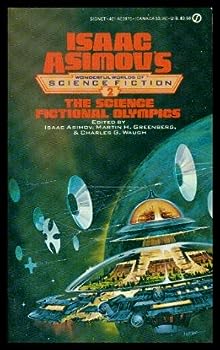 An anthology edited by Isaac Asimov, Martin H. Greenberg andCharles G. Waugh. From interstellar matches that could decide the fate of planets, to a time when top athletes are built not born, to a... This description may be from another edition of this product.

These Stories Stuck With Me for 20 Years

Published by Thriftbooks.com User , 17 years ago
I read this anthology several times as a teenager in the '80s. I've never forgotten several of the stories. In fact, between the latest world events, the 2004 election season, the 2004 Olympics, several of the stories kept popping back into mind unbidden this summer. So I acquired an unscratchable itch to revisit the book, and here I am. The review by Randy Stafford is dead-on; there are a half-dozen real gems in the book and then there are some more forgettable stories. However, since I find that the gems are still sparkling in my memory some 15-20 years after I last read the book, and it's only in the context of this anthology and its general theme of competition that they shine together, I have to argue that the anthology deserves more than Randy's 3 stars. I've found this is a collection that my bookshelf can't be without any longer!
Trustpilot
Copyright © 2022 Thriftbooks.com Terms of Use | Privacy Policy | Do Not Sell My Personal Information | Accessibility Statement
ThriftBooks® and the ThriftBooks® logo are registered trademarks of Thrift Books Global, LLC