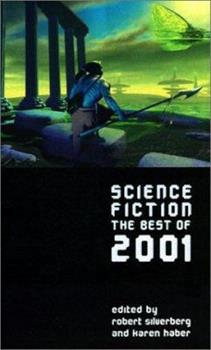 The best stories of the year, as selected by the one of the world's most honoured science fiction authors and his long-time collaborator. Here in one affordable volume is the best short science fiction of the year as selected from magazines, anthologies and journals. It is the first in a prestigious new series from ibooks. Robert Silverberg, a multiple winner of the Hugo and Nebula awards as a writer, has complied a distinguished record as an anthologist...

An enjoyable and thought-provoking SF anthology

Published by Thriftbooks.com User , 19 years ago
I had high hopes for "Science Fiction: The Best of 2001," the anthology edited by Robert Silverberg and Karen Haber. The main reason I was so enthused about the book was due to the presence of science fiction legend Silverberg as co-editor; I figured, "This guy knows sci-fi." Well, I was not disappointed. "2001" is a marvelous collection of 11 tales about humans, extraterrestrials, robots, and/or genetically engineered creatures.My favorite tales in the anthology are as follows: Michael Blumlein's "Know How, Can Do," told in the first-person by a genetically engineered "chimeric life form"; Richard Wadholm's "From Here You Can See the Sunquists," about a couple's visit to a town that is enveloped by a temporal anomaly; Robin Wayne Bailey's "Keepers of Earth," the story of a devastated earth, abandoned by humanity and populated by robots; Michael Swanwick's "The Dog Said Bow-Wow," in which a genetically engineered superdog has an adventure in a future London; Nancy Kress's "And No Such Things Grow Here," which opens with the protagonist learning that her sister has been arrested for GMFA (Genetic Modification Felony Actions); and Dan Simmons's "On K2 with Kanakaredes," the rather touching story of an interspecies mountain climbing expedition.But the best story in the collection, in my opinion, is Jim Grimsley's haunting "Into Greenwood." This tale takes place on a planet where neutered, genetically altered humans serve as symbionts for a race of intelligent trees. "Into Greenwood" is a superb blend of a compelling sci-fi concept, great character development, and wonderful descriptive writing. I recommend "Science Fiction: The Best of 2001" both for pleasure reading and as a classroom literature text.

Published by Thriftbooks.com User , 19 years ago
For less than eight dollars--and way ahead of the competition--Silverberg has pulled together a terrific best of the year collection.
Copyright © 2022 Thriftbooks.com Terms of Use | Privacy Policy | Do Not Sell My Personal Information | Accessibility Statement
ThriftBooks® and the ThriftBooks® logo are registered trademarks of Thrift Books Global, LLC