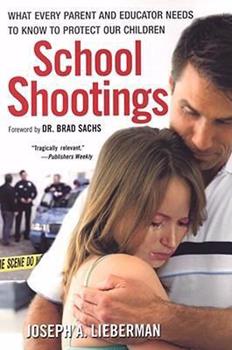 School Shootings: What Every Parent and Educator Needs to Know to Protect OurChildren

by Joseph A. Lieberman

In this insightful look at the danger that threatens students and families today, investigative journalist and longtime educator Joseph A. Lieberman takes us inside the minds and hearts of everyone affected by school shootings-and of the kids who commit the shocking crimes. Lieberman became intimately acquainted with this terrifying epidemic during an unforgettable, heart-breaking encounter with a traumatized survivor of a notorious school shooting...

Published by Thriftbooks.com User , 12 years ago
Kudos to Mr. Lieberman, An authoritative and insightful examination of a most disturbing phenomenon permeating modern society across the globe. Well researched and well documented, this work casts a light into the dark corners of this disturbing subject. It lends credibility to the theory that youth in this electronic age do in fact become desensitized to violence from exposure to the over the top mayhem put forth today in film and first person shoot 'em up video games. My own children have graduated and moved forward in their lives and I now have grandchildren whose future lies in this Bizzaro world. Mr Lieberman's work is scholarly and in no part sensationalized for the sake of selling books. I wish that I had had this understanding and knowledge at my disposal when my youngest son was caught up in a post Columbine knee jerk reaction percipitated by a frenetic gaggle of teachers and administrators. Between these covers lies both knowledge and understanding. Parents,grandparents,educators and administrators will all benefit from this compelling volume

The most comprehensive review of school shootings

Published by Thriftbooks.com User , 13 years ago
Joseph Lieberman's analysis of school shootings is the most comprehensive work on the topic. His work ranges from the 19th century to the present, from rampage shootings to school invasions. He comes to his analysis through his study of one of the most bizarre school shootings in the history of this country, Kip Kinkel's rampage shooting of his school in 1998 after killing his mother and father for the ostensible reason that they would be embarrassed and humiliated by his actions. The Springfield, Oregon rampage shooting is explored in the greatest detail; however other shootings are also analyzed, including those at Moses Lake, Washington, Pearl, Mississippi, Jonesboro, Arkansas, Columbine, Virginia Tech, and Northern Illinois University. In each case, he focuses attention on important characteristics that even an expert in the field might not have known. In addition, he investigates school invasions such as the West Nickel Mines invasion in Lancaster, Pennsylvania. He examines these heart-rending phenomena with compassion and understanding. Lieberman asks important questions about why such events occur. He looks at parenting, media, psychopathology, legal aspects, and the role of the police. He also explores the devastating aftermath of such violent events. Victims are physically and psychologically scarred for life. I recommend this book for anybody who wants to further their understanding of school related violence. The book contains a great deal of information to digest. Because of the topic, it is not an easy read; however, Lieberman writes clearly and concisely.

Published by Thriftbooks.com User , 13 years ago
Mr. Lieberman's books help to understand the unthinkable - the reasons why a disturbed teen's behavior was overlooked and signs of impending violence were missed. My husband was a victim of a school shooter on September 29, 2006. Mr. Lieberman's books give valuable insight as to how this can happen - that school shooters are master manipulators and are able to convince counselors, school staff, adminstrators and even law enforcement that they are not a threat. The making of a school shooter begins at home WITH THE PARENTS. Eric Hainstock (who murdered my husband) was referred time and time again by several different schools he attended for counseling, but his father would not allow it. He was afraid the County would remove Eric from his "home" and there would go his meal ticket (his ex-wife paid child support for Eric). Therefore the abuse continues and the teen becomes more and more out of touch with reality. Eric Hainstock never gave a thought to murdering his own worthless, abusive father, but instead shot my husband who was the very person trying the hardest to help him. Mr. Lieberman's books point out again and again how the shooters manipulate people to believe there is nothing wrong. I don't know how we will ever be able to prevent school shootings in the future when the parents and their disturbed child are so intent on hiding the fact that there is a problem. These children and their abusive parents should not be able to refuse counseling. The shooters ability to manipulate people is shown in Mr. MacDonald's review. He states that Mr. Lieberman arrives at the "erroneous conclusion that Kip Kinkel is a terroist, psychopath and sociopath". There is no question that Kip was all three of these. He was obviously very mentally disturbed, as are the rest of the school shooters to get to the point that taking up a gun and murdering innocent people is the only way they see to make themselves feel better. Mr. Lieberman's books help people to understand how these school shooters think so that hopefully we may be able to foresee a potentially dangerous individual and stop them before there is more bloodshed. Eric Hainstock told three of his friends that "he didn't think Mr. Klang would make it through Homecoming". He then brought two loaded guns to school the morning of Homecoming and used one to take my husband's life. Not a day goes by that I don't think about what might have been if just one of those kids had reported what Eric told them. If Mr. Lieberman's books contribute to preventing even one school shooting, then they are a priceless piece of work.

We Need to Know

Published by Thriftbooks.com User , 13 years ago
There has been an epedemic of school shootings in the recent past. Schools used to be safe havens where we could learn and study. Now when we enter a school we have to go through a security check and are constantly vigilent and in fear of being killed. We need to know what has gone into creating the situation that we now face in our schools. In his book Joseph Lieberman presents a well researched and well documented yet readable book that gives the reader an inside look at what is happening in our schools to create situations that result in loss of life.

A "must" read for understanding this issue

Published by Thriftbooks.com User , 13 years ago
As a university adjunct professor, I researched many books about school shootings before I settled on Mr. Lieberman's book. I used the book for a college reading course -- with the intent of getting students involved in the subject matter and, thus, involved in reading. It has turned out to be an excellent choice. This book weaves the story of a horrific act, which is played out all too often in our world today -- that of a troubled teen using violence to express what may be a personal or societal problem. This is story of Kip Kinkel -- but much more than that. Lieberman keeps you intrigued as the story of Kip unfolds among the questions that we all must ask ourselves: what makes a person kill his parents and school mates; what, in society, may play a role in forming the personality of the teen who kills; what are we doing to curb bullying at schools - which seems to play a big role in many shootings. These issues are springboards for discussion within ourselves and with others. I would highly recommend this book for its style of writing (great writing) and content. Mr. Lieberman passes no judgement on Kip or the other shooters he profiles. Instead, he offers us insight and information and leaves the pondering to us. I couldn't put the book down. Neither could my students.
Copyright © 2022 Thriftbooks.com Terms of Use | Privacy Policy | Do Not Sell My Personal Information | Accessibility Statement
ThriftBooks® and the ThriftBooks® logo are registered trademarks of Thrift Books Global, LLC