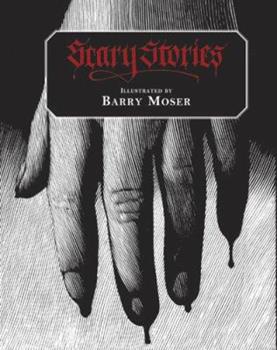 Goose bumps along your arms, the hairs rising on the back of your neck, these are the sure signs you're immersed in a great scary story. Featuring classic stories by such timeless authors as Edgar Allan Poe, O. Henry, Bram Stoker, Washington Irving, H. P. Lovecraft, Ambrose Bierce, and H. G. Wells, this spellbinding collection also includes modern masterpieces by contemporary legends like Stephen King, Roald Dahl, Shirley Jackson, Joyce Carol Oates,...

We receive 17 copies every 6 months.

Published by Thriftbooks.com User , 12 years ago
If you want scary and wierd stories to read then get this book. I have not read all of it but so far it is very good! One story that was good was Kittens. I read scary stories all the time and this book is one of them that I like.

Published by Thriftbooks.com User , 12 years ago
An excellent selection of short horror stories, some by familiar authors, others not. Each story is creepy and disturbing in its own way, and the illustrations by Barry Moser perfectly capture the essence of each. I read these aloud with my 11-year-old son, and afterward found myself lingering over each story, thinking about some image or mood created by the narrative. (In a couple of the stories, the 19th-century phrasing was a little difficult for my son.) The collection could have been better yet by including more stories and more illustrations.

A bit scary, a bit creepy, a bit disturbing...

Published by Thriftbooks.com User , 14 years ago
Eep! I've enjoyed many books featuring Barry Moser's illustrations, and when I spotted this horror anthology with his distinctive style on the cover I had to have it. The table of contents shows stories by classic horror writers Lovecraft, Poe, Bierce, and more - but also includes works by more recent authors, from Capote to King. [Several of these, including the opening story, Dean Koontz' "Kittens," and Bram Stoker's "The Squaw," feature Bad Things Happening To Cats, so be warned; in most cases vengeance is duly delivered, and I find that I have a much easier time reading about Bad Things Happening To Bad (or at least Not Very Nice) People!] Moser's illustrations are sometimes rather subtle - like the hand on the cover, fingertips dripping blood - and sometimes outright horrifying, like the picture of the baby in Dahl's "Genesis and Catastrophe". [That's the kind of picture that used to make me memorize the page number so I could flip past it without looking next time!] Each story has one illustration, sometimes of a key moment and sometimes of an incidental one, but all very effective. I was amused to find this line in the E. F. Benson story "The Bus-Conductor" - it might serve as an explanation for why one would deliberately read a book with stories and pictures that make one want to look away. One character is being asked by another why he continues to go ghost-hunting when it clearly terrifies him, "or do you like being frightened?": "'Why, of course, I like being frightened,' I said. 'I want to be made to creep and creep and creep. Fear is the most absorbing and luxurious of emotions. One forgets all else if one is afraid.'" It isn't the terrifying tales that bother me most; it's the profoundly disturbing ones, such as Joyce Carol Oates' nightmarish "Thanksgiving". Give me tell-tale hearts and ghostly weddings any day!
Copyright © 2020 Thriftbooks.com Terms of Use | Privacy Policy | Do Not Sell My Personal Information | Accessibility Statement
ThriftBooks® and the ThriftBooks® logo are registered trademarks of Thrift Books Global, LLC