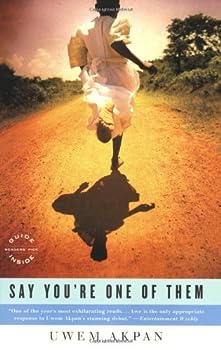 Say You're One of Them (Oprah's Book Club)

This description may be from another edition of this product. Each story in this jubilantly acclaimed collection pays testament to the wisdom and resilience of children, even in the face of the most agonizing circumstances. A family living in a makeshift shanty...

An unforgettable, beautiful, authentic and wise literary call to action

Published by Thriftbooks.com User , 12 years ago
Uwem Akpan is a Nigerian Jesuit priest and writing teacher living in Zimbabwe, and his stories are garnering much acclaim. Just a few pages into his debut collection, it is easy to see why. Beautiful and devastating, the five tales found in SAY YOU'RE ONE OF THEM are at once compelling and painful to read. All told from the narrative perspective of a child in crisis, they symbolize a continent in crisis as well. Set in African hot spots like Ethiopia and Rwanda, the stories revolve around themes of family and identity, religion and ethnicity, all complicated by violence, fear and poverty. A destitute family in Nairobi inhales glue to stave off hunger and watches their 12-year-old daughter turn to prostitution in "An Ex-mas Feast." Two little girls in Ethiopia --- one Muslim, one Christian --- are best friends until religious tensions and riots in their city force them apart in "What Language is That?" Both these stories are short yet highly effective. The three remaining tales, however, are even more amazing and heartbreaking. The nine-year-old girl at the center of "In My Parents' Bedroom" is forced to watch as the horrors and injustices of contemporary Rwanda play out in her house, each of her parents having to take opposing sides. In less than 30 pages, Akpan spins a brilliant tale that entrances and repulses, capturing the complexities of the situation and reminding readers that there are real lives at stake beyond this fiction. In "Fattening for Gabon" two young siblings are being raised by a kindly and affectionate uncle as their parents lie dying of AIDS in their home village. Kotchipka and Yewa are spoiled and feasted by their uncle's new friends, but Kotchipka realizes that he and his sister are in grave danger and tries to resist their charms. By the end he knows he must fight for his own survival and that of his little sister, or be sold into slavery. "Luxurious Hearses" is the story of a 16-year-old Muslim boy escaping from one end of Nigeria to the Christian region and the home of the father he has never known. Pretending to be a Christian, he finds himself stuck on a bus full of Catholics and Pentecostals, not to mention a tribal chief of the indigenous religion. As the stuffy, overcrowded bus sits and awaits its driver, wave after wave of tension ripple through it, threatening violence. Differing political views and beliefs find common ground in a hatred of Muslims, and Jubril --- far from his family and having been turned against by other Muslims --- must keep up his façade, all the while praying to Allah for help. The bus becomes a microcosm of a divided nation, and Jubril's internal exploration of identity and personal history is symbolic of the confusion, faith, hopes and fears of its citizens. Akpan takes readers on Jubril's fascinating journey and delivers a surprising and very memorable ending. In each story Akpan uses language, often a broken but lyrical English, to show the similarities and differences between the div

Art In The Horrific Details

Published by Thriftbooks.com User , 13 years ago
Stories of abused and battered children in Africa are legion, but few cut as close to the bone as this collection by Uwem Akpan. His five tales, two of which are novella length, are told with the uninhibited, truth-filled voices of the children involved. Each one takes place in a different country but the theme is universal: the biggest challenge faced by children in Africa is staying alive. Akpan, a Jesuit priest with an MFA in creative writing from the University of Michigan, piles on details available only to one intimately familiar with the lives described. Be forewarned: some of those details are gruesome to the point of causing distress, which I am sure was his intent. The imagery can range from the droll, like the description of the motorbike loaded with five people, various fruits and vegetables, a rooster and five rolls of toilet paper in "Fattening for Gabon," to the most horrific sight a child can see, a parental bloodbath, in "My Parents' Bedroom." This story ends the book and is the source of the title "Say you're one of them," the command given by a desperate Rwandan Tutsi mother to her Hutu-fathered child as machete-wielding killers approach. Various dialects are used masterfully to both reveal characters and set scenes. The jargon, slang, and foreign phrases may be off-putting to some readers, but little meaning is lost when the dialogue is read in full context. Quite frankly, the only time many readers can bear to imagine events like those in the book is when they take place on foreign shores. We can be sickened and outraged by horrors on another continent; the same happenings across the street from where we live would paralyze us with fright. Fortunately, Akpan's familiarity with African poetry infuses much of the writing, giving the book a lyrical tone that keeps the more violent passages from slipping into slasher-movie territory. As a person who has photographed and written about Africa extensively, I must confess I was not shocked by Akpan's stories. Unfortunately, tales like them are all too familiar to me. I was deeply moved by his dramatic intensity, however, and highly appreciative of his ability to put the reader inside the children's lives. Dave Donelson, author of Heart of Diamonds: A Novel of Scandal, Love and Death in the Congo

Short stories that make you think!

Published by Thriftbooks.com User , 13 years ago
This group of short stories by Nigerian-born Jesuit priest, Uwem Akpan, is absolutely stunning. I mean that in two distinct ways. First, the stories are wonderfully constructed with characters that come alive on the page. The descriptions of family/village/street life in Nigeria, Rwanda, Ethiopia, Benin and Kenya are often both detailed and horrific. Which leads to the second way in which the stories are stunning - the difficulties experienced by the young protagonists in these stories continued to stun me long after I put the book down. In "An Ex-Mas Feast," Uwem Akpan takes us to the seedy street world of Nairobi, Kenya, where a family - parents and children, live off of the earnings of the twelve-year-old daughter who sells herself to rich men in fancy cars. Some of the earnings are supposed to help her brother go to school. He is bright, sensitive and knows what is going on - and is not happy about it. The children in "Fattening for Gabon" are being prepared for sale into slavery by their uncle. In "What Language Is That?" two little Ethiopian girls are best friends until their parents suddenly say they cannot speak to each other ever again because one is Muslim and the other is Christian. In "Luxurious Hearses" a Nigerian boy from the north is trying to escape to relatives in the south - on a bus filled with the same religious animosity that he hope to escape. The final story, "My Parent's Bedroom" describes the violence between the Rwandan Hutus and Tutsis as seen through the eyes of a young girl who has mixed parentage. These stories all are full of hatred and humanity, love and unspeakable evil. They bring some understanding to news from African nations and make it feel personal. Uwem Akpan does use quite a bit of native dialect in the speech of the characters. He also sprinkles it with many non-English words. A brief glossary at the end of the book would have been useful. I could understand the terms in context, but I'm afraid that subtle and possibly not-so-subtle nuances were lost. Armchair Interviews says: Up close and personal with people in these countries.

Published by Thriftbooks.com User , 13 years ago
Unless one has encountered circumstances similar to those outlined in the stories, it is hard to reconcile the fact that this is a daily occurrence for millions of children. For a debut author, quite simply, Uwem Akpan has woven remarkable tales. For whatever reason, I chose to read the last story, My Parents Bedroom, first. Without a doubt, this powerful story is the best in the collection. The remaining stories hovered around a 7.5/8 out of ten but never took me to the gripping heights of My Parents Bedroom. I am somewhat shocked that this book wasnt given the stamp of approval by more magazines/newspapers and well-known authors. It is a gem of a collection and I hope it garners more publicity because the author truly deserves this.

Let's Take Care of Our Children

Published by Thriftbooks.com User , 13 years ago
Say You're One of Them is a powerful collection of short stories. Told from the perspective of young children, the collection takes us into the brutality of the childrens' lives in Africa. Each story is a slow awakening to unbelievable horrors for both the child and the reader. The first story, An Ex-Mas feast, looks at a poverty-striken family that must rely on their twelve year old daughter's income to survive. She has to prostitute herself for food and money but she is trying to earn enough money so her younger brother can go to school. The children in "Fattening for Gabon" are being prepared for sale into slavery by their uncle. In "What Language Is That?" two little Ethiopian girls are best friends until their parents suddenly say they cannot speak to each other anymore because one is Muslim and the other is Christian. In "Luxurious Hearses", a Nigerian boy from the north is trying to escape to relatives in the south on a bus filled with the same religious animosity that he hopes to escape. The final story, "My Parent's Bedroom", describes the violence between the Rwandan Hutus and Tutsis as seen through the eyes of a young girl who has mixed parentage. For me, the most powerful story is the last. I will forever hold the powerful images of a toddler playing in his slain mothers blood. Each story is a work of fiction, but is based on real situations that have transpired. In the Afterword, written by a pastor who knows the author, Uwem Akpan, the writer offers his belief that the publication of these stories is a bold attempt to enlighten readers about children of Africa, which in turn may create a passionate desire to create a safer place for children all over the world. After laying down this book, I know I am one of those affected people, and I thank Pastor Akpan for this powerful lesson.

Say You're One of Them Mentions in Our Blog 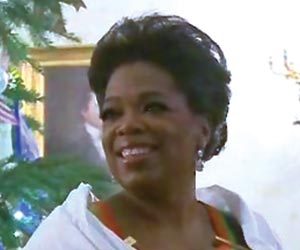 22 Years of Oprah's Book Club = We’ll Read What She's Reading, Please
Published by Beth Clark • November 02, 2018
Since Oprah's original Book Club launched in 1996, it's evolved and taken on different forms, but it's still going strong because, well, she's Oprah. She's recommended 79+ books, plus written a few of her own (no pun intended), all of which invariably enhance the world of readers, even if it's just by making them think for a few pages. Below are nine recent titles, plus the one it all began with, so peruse and choose what speaks to you. Oh, and you can shop right from our blog!
Read Article
Copyright © 2020 Thriftbooks.com Terms of Use | Privacy Policy | Do Not Sell My Personal Information | Accessibility Statement
ThriftBooks® and the ThriftBooks® logo are registered trademarks of Thrift Books Global, LLC