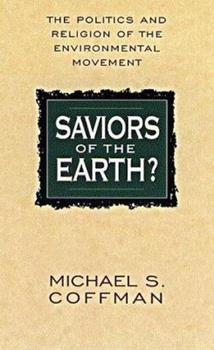 Saviors Of The Earth: The Politics and Religion of the Enviornmental Movement

Vice President Al Gore and other environmental leaders push for radical changes in Americans' actions and ways of thinking. These changes, however, are not based on scientific findings but rather on pseudoscience--a manipulation of scientific data in a quest for legal power, political popularity, and Eastern mysticism. Their objective is to protect the environment, yet their laws accomplish little. In the process, the economy and ultimately we, the...

Coffman casts light into the murky bowels of ecoactivism.

Published by Thriftbooks.com User , 17 years ago
Dr. Coffman does a wonderful job of enlightening interested readers about the ugly mission and underpinnings of the environmental movement and how it has been sponsored by a liberal news media. His work is heavily researched and noted. His thoughts are clear and convincing. His conclusions are perceptive and compelling. A good read for those open and questioning minds among us.

Published by Thriftbooks.com User , 21 years ago
The shocking revelations in this book are fully documented by the author, often using direct quotes from Al Gore and other hard-core environmentalists. The book is not just the opinion of one man, but is instead an academically solid piece of work, written in a very readable style. Without the documentation that is provided throughout the book, I would have found it hard to believe and may have dismissed it. Coffman also goes to great lengths to present both sides of the issues, and that makes the content and conclusions even more sobering. A real page-turner, but, unfortunately, not fiction.

Published by Thriftbooks.com User , 23 years ago
Filled with information and extremely well documented this book will answer many questions for anyone now living in an enviornmentally sensitive area who is questioning if our constitution simply no longer applies. Before one commits to an eviornmental group this should be mandatory reading. For anyone interested in a free United States it is also not to be missed. I can not stress it enough that this is a very important book.

This book will disclose the agenda of the environmental move

Published by Thriftbooks.com User , 23 years ago
Michael Coffman worked for the Forest Service and while he does not want to harm the environment, he is able point the biased views of the various environmental groups. In order to rise funding, many groups are forced to create distorted threats to mother earth.
Trustpilot
Copyright © 2022 Thriftbooks.com Terms of Use | Privacy Policy | Do Not Sell My Personal Information | Accessibility Statement
ThriftBooks® and the ThriftBooks® logo are registered trademarks of Thrift Books Global, LLC