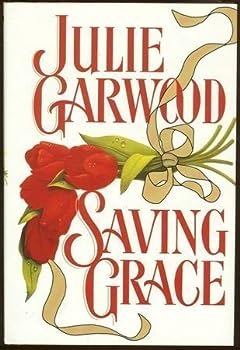 Lady Johanna, a widow in thirteenth-century England, is thrust into another marriage of convenience, but finds herself drawn to her gruff yet gentle husband.

Published by Andy , 1 year ago
I loved every moment in this story. Wonderfully written! The wording and flow of the story really took me to a different time.

First historical romance I ever read

Published by Mika , 3 years ago
Didn't think I would like it, but I love it. Could not put this book down. Happy I took a chance.

Second Chance at a Wonderful Book

Published by Thriftbooks.com User , 17 years ago
I've spent the past week in a happy Julie Garwood book re-reading daze. I whizzed through eight of her historicals and left Saving Grace for last. For some reason I had convinced myself that Saving Grace was good - but not great - and that the novel wasn't as strong as say, The Secret, Ransom, or Honor's Splendour. I couldn't have been more wrong. The more I read, the more enchanted I became. Saving Grace deals with a very serious issue (domestic abuse) and I think this is why I rushed through it during the first read. However, I now realise that it's a super book with absolutely lovable characters, and a fine addition to the Scottish Laird / English Lady Garwood books. Lady Johanna is simply wonderful; she enters the book as quite shy and scared as she has been beaten many times by her deceased first husband and yet she still manages to hold her own with Laird Gabriel. I liked it that first of all Johanna had difficulty fitting in with her new clan - any woman would be vulnerable and untrusting at first if they had experienced Johanna's past and yet she becomes stronger and braver with each day that passes. Johanna is actually very clever and analytical, as well as being sweet and kind hearted. Gabriel is off the chart as a hero. What is so special about him is that as well as being strong and brave he is also very sensitive to Johanna's feelings and never treats her cruelly - in fact he is very considerate and kind as he tries to earn her trust (without being soppy). Gabriel was stigmatised as being illegitimate when he was younger and had a hard upbringing and I think this is part of the reason why he suits Johanna so well. I especially liked the way that the author told you about how vulnerable Gabriel felt as a boy and how he dreamed about having a lovely wife and home as it showed a softer side to the powerful Laird. Johanna and Gabriel are clearly perfect for each other. There are great secondary characters too. Auggie (an old man obsessed with golf), Alex (a boy Gabriel claims as his son), and Dumphries (a dog Gabriel rescued) all have their own unique personalities and quirks. The plot is great. It gives you some information about the horrible ways that women were restrained and abused in the past without going into too many details. There is plenty of hilarious dialogue between Johanna and Gabriel and Johanna comes out with loads of funny sayings (There's more than one way into a keep!). The ending ties up the loose ends nicely and the reader has no trouble in imagining Johanna and Gabriel living as a happy, passionate married couple for the rest of their lives. Sigh! :-) JoAnne

Not Your Typical Garwood, But Fabulous Beyond Words!

Published by Thriftbooks.com User , 22 years ago
When I read my first Garwood, I fell completely in love and flew to my book store to buy every book of hers that was in stock. I got to *Saving Grace* about halfway through my pile, and was rather shocked by the begining. You hear of how preists had instructed their students in the 13th century and are shocked. Being a girl myself, I could see why women would feel awful about themselves. And then you get a veiwpoint swich and we are taken to fourteen year old Johanna who is being told that her husband is dead. Poor dear, she can barely contain her joy as the news is being told to her. You later hear that he was a cruel man who beat Johanna, blamed her for the lack of an heir, and flaunted his mistresses in her face. Then there is the local preist who beats the following facts into Johanna's brain: you are a woman, women are slime, you will never amount to anything, blah, blah, blah. So this poor teen is scared out of her mind, and amazingly happy to be free. Knowing that something bad might happen, she smartly files for a divorce, just in case.Two years later, the king demands that she must marry. Although reveling in her spinsterhood, Johanna has no choice. The trusty brother comes to the rescue and whisks Johanna off to the highlands where she is to marry his friend, Gabriel. Johanna is natuarally terified of marriage given her past experiences and defies her strong new husband.When Gabriel introduces her to real passion, though, she is forced to admit to herself that he is not the monster her first husband was and that she is falling in love with him. And she realizes she may trust him and that he will protect her. The fishyness behind Johanna's first husband's death starts to reveal itself, and the precious new love is put to it's first test. Will Johanna and Gabriel survive?One of the reasons I loved this book was that the characters' actions were clearly described so there was no doubt about what was going to happen. Also, there was definatly a hard coating to Gabriel and I think he is Ms. Garwood's BIGGEST male, but he was also very loving and heartstopping. Johanna was wonderful and truly had Gariel wrapped around her little finger. But their's was a rare love and it made the pages sparkle like gold. The topic of female degregation by the church was obviously well researched by Ms. Garwood and it shows. It is also so well written into the book that I actually screamed at it becuase of the unfairness of the issue. I sincerely hope that Ms. Garwood writes a continuation of this story, and I think it will go over extremely well with her fans.

Among one of Julie Garwood's finests love stories!

Published by Thriftbooks.com User , 22 years ago
I have to admit that this book, like most of Ms. Garwood's books have very similar characters. Her perference of 'huge' and outwardly grumpy hero and small and femine heroine are evident once again in this book. However, this book is still exciting, fun, loving and beautifully written. Through reading the book, you see the transformation of Lady Johanna from a timid, scared girl into a courage, smart young woman. Her suffering at the hands of her ex-husband and ex-priest was extremely sad and painful to read. Gabriel is the biggest teddy bear among all of Ms. Garwood's heros. He was allowed to believe that he is in total control of the marriage all throughout the book which created a lot of funny circumstances. All of the supporting characters, brother, first-in-commands, son.. etc are all well written and had great personalities. I also love the scenes related to how the clan tried to please Johanna and behave themselves. This is a great book... the storey is cohensive and moved along at a good pace. It is always refreshing to read a romance novel that the hero and heroine are not consistently misunderstanding each other and at each other's throat. Their acceptance of their marriage and great sex is also great in the story. If you have never read a Garwood book, this one you should definitely pick up.

This will always be my favorite book of all time.

Published by Thriftbooks.com User , 23 years ago
I first read this story a few years ago and just purchased a new copy because my original is so worn from me constantly reading it. What makes Julie Garwood's characters stand out in this story is the fact that I can see why Gabriel and Johanna fell in love. The reader is taken through every turning point of their relationship, the laughs and the tears. I have lent this book to friends who have never read a romance before, and now they own their own copy. So if you are a fan of 13th century romances or have never read one in your life, I definitely recommend this book.
Trustpilot
Copyright © 2022 Thriftbooks.com Terms of Use | Privacy Policy | Do Not Sell My Personal Information | Cookie Preferences | Accessibility Statement
ThriftBooks® and the ThriftBooks® logo are registered trademarks of Thrift Books Global, LLC