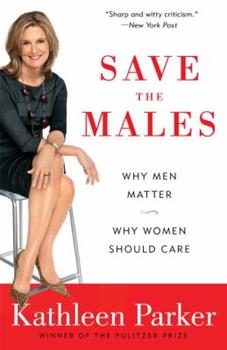 Save the Males: Why Men Matter Why Women Should Care

With piercing wit and perceptive analysis, Pulitzer Prize-winning writer Kathleen Parker explores how men, maleness, and fatherhood have been under siege in American culture for decades. She argues that the feminist movement veered off course from its original aim of helping women achieve equality and ended up making enemies of men. The pendulum has swung from the reasonable middle to a place where men have been ridiculed in the public square and...

Published by Thriftbooks.com User , 14 years ago
This was a very well-written, reasoned book about why men are important. Most importantly, without men, there are no women, and vice versa. Being opposite and different is what makes us important and worthwhile. This book helps lay out the case that our pornographic and male-phobic society has helped encourage men to believe that they are not useful in our society. The policies of our government and how we treat men in our advertisements, schools, and homes tells them they are not worthwhile and that they should be feared in many cases (no men can sit next to unaccompanied minors in Australia: are men really guilty by default? On college campuses faces of random [not guilty] students are plastered around campus as "potential rapists": are men rapists simply for being men?). These and many more stunning and depressing cases are laid out to show how prevalent and pervasive these opinions are, as well as how foolish they really are and the consequences of such mysandry.

Save the Males: Why Men Matter Why Women Shuold Care

Published by Thriftbooks.com User , 14 years ago
As a reader from Spain, this book is a good warning on what is coming from the politically correct USA . Our "progressive" socialist government is importing all the failed policies inspired by radical feminist in the States. The result will be the same inequalities, with a Spanish accent, but happy brainwashed voters.

Published by Thriftbooks.com User , 14 years ago
I read this book in two sittings. I could not put it down. Kathleen Parker comes out into the open and talks plainly regarding a phenomenon about which a great many American women are in denial: that over the past 40 years feminism and its evil twin political correctness have tweaked our culture in a decidedly anti-male direction. Lots of laughs for women who hate men, maybe, and as Kathleen herself told me, "a huge bonding agent for women." Swell. But I have a message for all those "Jerry Maguire" American women out there who meet to congratulate each other on being women and to vilify men: we American men are beyond sick of it, and getting mad enough to fight back. You want that? Because here's the form that the "fighting back" will take: we'll go elsewhere to meet women. If despising us is how you puff yourselves up, who needs you? That's a little blunt, but it needs saying. I'm an American man, and in a perfect world I would dearly love to value and honor the women of my own country. But I can't. Not now, anyway. Kathleen is absolutely correct: American women have made such a fetish of themselves, and of blaming men for all of their problems including those they bring upon themselves,that in recent years I have wondered why on earth American men should want to have anything to do with them. I'm married, so I don't have to worry about such things, (and yes, I am married to an American woman.) But I don't blame my fellow American men for going on the Internet and seeking female companions in Europe, South America or the Phillipines. I once adopted a cat who turned out to be so violently hostile to me that I returned it to its original owners. I wanted a companion, not a live-in enemy. Kathleen is on-point and on-target when she makes it clear that American men want companions, not live-in enemies. And we're tired of being depicted on TV and in the movies as clueless dolts, incompetent bumblers, witless brutes and green-fanged rapists. It's no longer cute or funny, not that it ever was. Don't treat us with contempt and then expect us to call you for dates. And don't accuse us of seeking "submissive dewdrops" if we go seeking women who won't try to emasculate us in order to make themselves feel "liberated." Kathleen told me that young women in America are her greatest hope. Because she sees among them, from what they say to her when she speaks on college campuses, a realization that our society has indeed become anti-male, and on the whole they're not comfortable with it. The "sisterhood" of the '60s and '70s, that baby-boomer generation of screechy feminists who took over the national conversation about gender relations about 40 years ago, is getting old. So is its radical message. Most of the original goals of 1960s feminism have long since been achieved. But the graying "sisterhood" has perpetuated male-bashing as a way of continuing to justify its existence (not to mention its government subsidies.) It's my hope that the upcoming gener

Published by Thriftbooks.com User , 14 years ago
I came upon SAVE THE MALES at a local bookstore and found the idea of a woman writing a book in defense of men so novel that I bought it, and read it in one sitting. The book is basically a series of fast-paced, sometimes-hilarious essays that examine the way America has veered a little to the womanist side in education and popular culture, and how our men and boys have been short-changed in the process. I am a woman and have three daughters and was frankly surprised at how true Parker's argument rang. She isn't advocating the return of tribal patriarchy, but presents a dry, even-handed appraisal of a society that has become grid-locked in wrong thinking - thinking that one day might have a hugely negative impact on our country and our lives. The subtitle of the book reads: why women should care, and I have to honestly say that after reading the book, I really did care. Oh, and husband read it after me, and if he wrote a review, it would be ten stars...

If Loving Men Is Wrong I Don't Want to Be Right

Published by Thriftbooks.com User , 14 years ago
I read a lot of contemporary non-fiction. Kathleen Parker's Save the Males stands out in a overcrowded field. With a light and clever hand, this southern lady works to save the males and Western Civ. "You'll laugh, you'll cry" may be a cliché but it's true here. Save the Males has something for everyone. Young women will read Save the Males and have an appreciation for what their male contemporaries are up against. Mothers will read Save the Males and recognize a familiar story. Hardened feminists may read Save the Males and feel remorse. Men will appreciate that they're appreciated. Everyone should read, can read, and will enjoy reading Save the Males.
Trustpilot
Copyright © 2022 Thriftbooks.com Terms of Use | Privacy Policy | Do Not Sell My Personal Information | Cookie Preferences | Accessibility Statement
ThriftBooks® and the ThriftBooks® logo are registered trademarks of Thrift Books Global, LLC