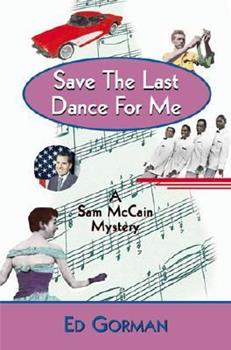 Save the Last Dance for Me: A Sam McCain Mystery

(Book #4 in the Sam McCain Series)

As Black River Falls, Iowa, prepares for a presidential election campaign visit from Vice President Richard Milhous Nixon, Reverend John Muldaur is stirring up the town with both his anti-Catholic, anti-Semitic circulars and his snake-handling ceremonies. When Muldaur drops dead on his altar, however, it's not from a snakebite but from strychnine-laced Pepsi. With only a week before her good friend Tricky Dick comes to town, Judge Esme Whitney enlists...

60's Nostalgia by a loveable sleuth way ahead of his time ...

Published by Thriftbooks.com User , 13 years ago
I'm glad I'm reading Ed Gorman's work at this stage of my 52-year old life for a few reasons, one of which is the wonderful trip back in time it offers ... I'm an Americana and nostalgia buff, so this series is wonderful. Tricky Dick (before he was officially tricky) is coming to town and a hot-looking, hard drinking, conservative judge is anxious for his arrival. There are religious fanatics enough to cover all denominations and the Dems are about to put up JFK (a catholic) to run for President ... now add some poisonous snakes and those crazies that worship through them (casting off evil spirits by holding rattlers) and kill a couple of the preachers and ... no spoilers here, just praise. Another reason I'm glad to read Gorman's stuff now is the protagonist to this series seems so ahead of his time (just very well grounded with flaws we all can relate to --- not just another drunk {in fact, not a drunk or cocaine addict at all}) ... and, of course, it's just nice to read a clever writer with sharp dialogue minus the attitude. This is my 2nd McCain read and I'm enjoying it as much as the first ... and mostly because of the recurring characters ... I already know them ... and like them all (republicans and democrats) ... isn't that cool? I think so. Okay, Amici, you know enough to READ this series by now ... very clever stuff.

Snakes, politics, sex, and murder in a small Iowa town.

Published by Thriftbooks.com User , 20 years ago
This is the 4th of Gorman's "Sam McCain" mysteries set in a town called Black River Falls, Iowa during the "happy days" of the late 1950's and early 60's. Of course, they weren't always that happy, filled as they are in this story with religious prejudice, murder, bigotry, infidelity, and mysterious goings on. McCain is a likeable character, and Gorman does a good job of letting us get to know him in this and the other novels of the series. Young, idealistic, liberal, cynical, unlucky-in-love, as well as shorter than most of the other male population in town, McCain works for the enigmatic, larger than life Judge Esme Ann Whitney, a cynical, Republican, aristocratic scion of the town who regularly hires the young Sam (a lawyer with an private-eye license) to investigate any crimes or murders which might cast Black River Falls in a negative light. The fact that Judge Whitney and the local sheriff are mutual enemies usually complicates both McCain's sleuthing and life in general.In SAVE THE LAST DANCE FOR ME, it is August, 1960. Presidential candidate Richard Nixon is coming to visit the town at the same time that a charismatic bigoted preacher has just been murdered (literally) while in the pulpit. McCain's assignment is to solve the crime of this unlikeable man's demise, even though no one involved seems to want to help him. The man's family, congregation, local law enforcement and a cage of "holy" rattlesnakes all figure prominently, as does a beautiful local reporter who is having problems in her marriage. I read the first 3 books before I read this one, but it isn't necessary to do so, as Gorman writes each book in the series with enough of McCain's musings about the past to explain who the important characters are in both the town and his personal life. SAVE THE LAST DANCE FOR ME stands alone very well on it's own, although it will probably make you want to go out and read the others in the series. 5 Stars.

McCain's Back and Better than Ever.....

Published by Thriftbooks.com User , 20 years ago
It's the summer of 1960 in Black River Falls, Iowa, and Richard Nixon, on the campaign trail for president, is scheduled to stop in this little mid-western burg for a speech and reception. Fledgling lawyer and part-time private investigator, Sam McCain's boss, town heavy, Judge Esme Ann Whitney, is hosting the Vice President's visit, and she wants her town to shine like the middle American jewel it is. Unfortunately, the murder of a local snake-handling, Jew and Catholic hating, fundamentalist preacher, tends to put a real damper on the judge's plans. Police Chief, Cliffie Sykes, is totally useless in the crime solving department, so she orders McCain to get to work, and clear up this nasty case before Nixon's arrival. "My Lord, we'll look like hillbillies. Snakes and Ozark faith healers. Good grief." But before he can even begin his investigation a second murder takes place, the local Protesant minister is gunned down in his garage. McCain's convinced these two crimes are related, and as he begins to dig, secrets start popping up all over town..... Ed Gorman is back with another delightful and nostalgic romp through yesteryear, with his well drawn, wacky and quirky cast of intriguing, original characters. His fast-paced plot really captures the essence of the '50s, and is entertaining, and full of marvelously vivid, laugh-out-loud scenes. But it's Mr Gorman's witty writing and wise-cracking, irreverent dialogue that really makes this novel stand out. Save The Last Dance For Me is short, sweet, engaging, and thoroughly enjoyable from the first page to the satisfying last. If you're new to Sam McCain and company, start at the beginning with The Day The Music Died, and read them all. If you're already a fan, Ed Gorman doesn't disappoint with his latest installment. This is a series that just keeps getting better and better.

Snakes in church and America in 1960

Published by Thriftbooks.com User , 21 years ago
Sam McCain, attorney and sometimes investigator for Judge Esme Whitney, thinks that he's seen a lot--but he's never seen a church full of people sticking their hands in a box of rattlesnakes before. When the church's minister dies suddenly, everyone thinks one of the snakes got him--but McCain suspects murder. When a second minister suddenly dies, he's certain there is a connection, but exactly what the connection is, and who might be doing the killing remains unclear. In the meantime, McCain has to learn to deal with the strong attraction he feels toward married Kylie Burke. SAVE THE LAST DANCE FOR ME is set in small-town Iowa during the 1960 Kennedy/Nixon election and Nixon's upcoming visit is very much on the minds of the characters. The conservatives in town are worried about Catholics and Jews uniting to overthrow the nation if Kennedy is elected, and jazz and rock and roll are hitting their stride. Author Ed Gorman presents this earlier America not as a nostalgic dream, nor as a nightmare, but as a past that is well left behind. Gorman does a fine job developing Sam McCain as an interesting and multidimensional character. His writing style is enjoyable and compelling. It'll make you want to keep reading. I found some of Gorman's observations to be a little cynical and condescending for my taste, but this didn't keep me from laughing out loud a couple of times or from enjoying SAVE THE LAST DANCE FOR ME.
Trustpilot
Copyright © 2022 Thriftbooks.com Terms of Use | Privacy Policy | Do Not Sell My Personal Information | Cookie Preferences | Accessibility Statement
ThriftBooks® and the ThriftBooks® logo are registered trademarks of Thrift Books Global, LLC