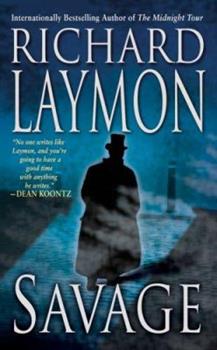 As Jack the Ripper takes his time gleefully eviscerating his victim Mary Kelly, he doesnt know that a 15-year-old boy is cowering under Marys bed. Trevor Bentleys life will never be the same as he begins a quest from London to New York and into the American West to stop the most notorious murderer in history. Martins Press.

One of Laymon's best books

Published by Thriftbooks.com User , 14 years ago
Savage tells the story of Trevor Bentley, a young man forced to flee England after accidentally witnessing Jack the Ripper's final recorded killing. Mistakenly blamed for the crime, Trevor seeks escape from the authorities and the Ripper on a yacht moored in the Thames. Tragically, the Ripper tracks him to the boat, commandeers it, and forces the owner to sail for America. Trevor is drafted to help man the boat, and can only watch helplessly as the Ripper holds a female passenger captive. After an arduous voyage, they reach the United States. Trevor escapes from the boat before the Ripper can kill him and manages to establish himself in America. Despite the fact that the Ripper is still at large, Trevor allows himself to believe that his nightmare is over. The young man is mistaken, however. One day he reads of a multiple slaying in Tombstone, Arizona--three women, horribly mutilated, were found dead in their home. The local authorities attribute the massacre to Indians, but Trevor recognizes the Ripper's handiwork. Blaming himself for allowing the fiend to reach America, Trevor vows to seek the madman out and kill him. The rest of the novel describes Trevor's odyssey across America, leading to his final confrontation with his nemesis. Savage will probably surprise a lot of Laymon's fans. On the surface, one might pick this novel up expecting an outright gore fest--after all, it's Laymon writing about Jack the Ripper. But the book defies expectations--instead, readers are treated to a happy combination of traditional western and a bildungsroman. Laymon delivers a well wrought tale of suspense, where the violence, although prevalent, is secondary to the main thrust of the story--that is, the unique rite of passage Trevor must undergo before he can be at peace with himself. Imagine Great Expectations, with blood and guts mixed in.

Published by Thriftbooks.com User , 17 years ago
I rank this really close to the top of my Laymon book list. I enjoy his writing-although a tad bit far fetched at times. I wasn't sure how I'd like this 1800's book with a western theme. Well, I can't say enough good things about it. Trevor/Willy was a great character, who got himself in all kinds of trouble. I have to say if your a Laymon fan, get your hands on this book it is well worth the hunting for it!

Published by Thriftbooks.com User , 19 years ago
Trevor Bentley appears at first to be a normal 15 year old boy, but there is a heroic side to him that becomes evident through out this book.one rainy night he accidentally stumbles upon the infamous Jack the Ripper, and deciding that this may be the only chance any one gets to put a stop to his murderous rampage, he sets out to stop him, Unfortunately young Trev finds him self way out of his depth as he gets himself and a family held hostage by the Ripper on a boat set sail for The new world, America, Trevor manages to escape from the grasp of this legendary murderer, but not before they both find them selves in America.This story is truly a great adventure, Starting in late 19th century London, to the new word America and then climaxes in the wild west, 3 very unique cultures that all existed at that time, add to this a story of love, friendship and self discovery and of coarse gruesome death in the way only Laymon can tell, and you have what is one of the greatest stories told

Published by Thriftbooks.com User , 19 years ago
It's been over a year since Richard Laymon's passing and I just remembered what a great writer he was-- 'is' actually, he'll live on through his books!! I decided to pay my long overdue respects in the form of a review.Let there be no doubt about it 'Savage' is Laymon at his peak!!I read somewhere that Laymon wrote this book after his editor suggested he tried something different from his usual slasher/ splatterpunk fare. It's breathtaking to read this book and come to the conclusion he's done just that, but also has incorperated almost all of the usual elements that have made him such a winner (in my opinion anyway).'Savage' is about Jack the Ripper, but it's not like you expect a serialkiller-novel to be. It's a fictional retelling and it also adds so much to the Ripper legend. It's told from the first person point of view and just the mix of Victorian English with Mark Twain-like American slang is worth the price of purchase alone. I won't spoil the plot, I'll just say the book is epic in scope and it heads for one of the most satisfing finales I have ever read. The way the Ripper ends up in the Old West, it's a classic!!This is for all you knuckleheads out there who still suck their Stephen King books and worshipp their worn off copies of 'Lord of the Rings'. This is so good, maybe they'll call THIS literature in about a 100 years time!

Published by Thriftbooks.com User , 20 years ago
This is like my all time favourite book..... Laymon is awesome far better then king (who should get his throat slit) and awfully underated....but there is one problem with this book and that's the part when he's on tha boat takes a bit to long and drags on..... but Laymon IS KING and king is LAYM.... hehe
Copyright © 2020 Thriftbooks.com Terms of Use | Privacy Policy | Do Not Sell My Personal Information | Accessibility Statement
ThriftBooks® and the ThriftBooks® logo are registered trademarks of Thrift Books Global, LLC