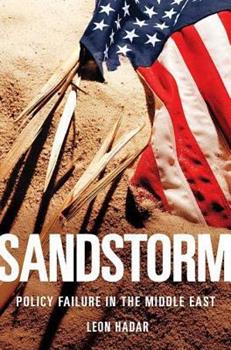 The time has come for a serious debate on the future involvement of the United States in the Middle East and this original and provocative analysis challenges the prevailing wisdom of the Washington foreign policy establishment. Hadar provides a sweeping reexamination of the conceptual bases of American policy and proposes a strategy of "constructive disengagement" from the region, a policy of benign neglect as a way of promoting the interests of...

Published by Thriftbooks.com User , 16 years ago
Sandstorm is an alternative view of the American foreign policy in which Leon Hadar argues for what he describes as the gradual disengagement of the United States from the Middle East. Hadar argues that over half a century now, America has been taking the main brunt of defending oil sources in the Middle East while this oil does not supply more than 17 percent of America's annual consumption. Compare this figure to that of funds the US spends annually on securing these oil barrels and one would conclude that - unlike how it is described - the Middle Eastern oil is not as cheap for America. Accordingly, Hadar suggest that the US abandons its Cold War policy in the Middle East in favor of a more realistic and pragmatic policy that gives a bigger role to the Europeans there. The book is overall interesting since it is one of the few works that give an alternative to the two dominant schools of foreign policies in the US namely Kissinger's policy of détente and maintaining status quos and that of the neoconservatives and their plans of redrawing the map of the world and engineering societies and their fates. The book's style does not flow and a number of ideas are repeated in more than one place but overall, Hadar makes points and arguments that are worth examining.

Published by Thriftbooks.com User , 16 years ago
Although I do not quite agree with all of the conclusions arrived at in Sandstorm, the book deserves nothing less than five stars for its discussion of a wide range of issues surrounding the Middle East and its information and commentary on modern Middle East history. This is a great read for anyone interested in, among other things, the European-American dispute over Middle East policy, the neoconservative strategy for the region, problems associated with maintaining hegemony in the Middle East, the truth about oil, Arab and Israeli lobbyists in Washington, and the Arab-Israeli conflict, of which there is a wealth of sound analysis. Hadar's book presents many facts and makes many strong points that clearly refute prevalent thinking on many of these and other related issues. Hadar refers to the decades-old U.S. policy in the Middle East that originated during the Cold War era, and which he contends was suitable for the circumstances of the Cold War, as America's Middle East Paradigm, or MEP. The basic purpose of the book is to show that the high level of intervention the MEP requires is no longer necessary with the Soviet Union gone. Here are some of Hadar's most important points: U.S. interests are being damaged by the continuing involvement in the Middle East, which tends to only create new problems, e.g. the funding of the mujahedeen in Afghanistan during the 1980s gave birth to Al-Qaeda and, more recently, a Shiite fundamentalist government has risen to power in Iraq thanks to the removal of Saddam's military regime. There is an inherent contradiction in the Bush administration's agenda of imperialism and spreading democracy, because the U.S.'s dominant position in the Middle East will only be threatened and weakened by the results of democratic elections in the region [this book was published too soon to mention it, but the recent Hamas victory in the Palestinian elections serves as proof of Hadar's argument]. The dispute between Europe and the U.S. over Middle East policies generally and the war in Iraq particularly is not a clash between political cultures, but rather a clash caused by differing interests; this point runs contrary to what neoconservatives say on a regular basis, and Hadar completely shoots down their arguments in explaining this point. The U.S. should stop providing military and economic aid to Middle East elites because it only encourages them to refrain from reform and agreement with rivals in their own countries, and thereby prevents the development of any sort of political legitimacy in the Middle East. A major misconception is that the U.S. economy is dependent on Middle Eastern oil; in reality, the largest source of foreign oil for the U.S. is Latin America and the U.S. gets the overwhelming majority [90% according to oil expert Daniel Yergin] of its crude oil supplies from parts of the world other than the Middle East. With the Soviet Union defunct, the U.S. no longer should be securing access to Middle

Published by Thriftbooks.com User , 16 years ago
I've read many of the books on Iraq and U.S. policy in the Middle East that were published in recent months and this is really one of the best and on the level of Michael Scheuer's Imperial Hubris. I decided to get the book after reading the review by Andrew Bacevich in the American Conservative whose books I enjoyed reading. The Author Leon Hadar really does a great job challenging much of the conventional wisdom regarding the Middle East, especially the idea that America is "dependent" on oil from the region or that we always need to "do something" to make peace between the Israelis and the Palestinians. I think that he makes a great point when he argues that we should have reassessed our commitments in the Middle East when the Cold War ended but that istead we got drawn even deeper into the region's problems since 1991 and ingited anti-Americanism that brought about 9/11. I think that is discussion of European-American relationshio is very original especially the sugegstion that the two sides have competing strategic and economic interest in the region and that the Europeans should do more to protect their interests in the Middle East. The books is not "heavy" like some of the academic stuff on the Middle East that comes out for time to time. It's very readable and thought provoking. Hadar works for the Cato Institute with which I disagree on doemstic issues. But this book in on foreign policy and the realisitc approach of the author fits with mine. I recommend!

Published by Thriftbooks.com User , 16 years ago
It is rare to find a bold, independent analysis of U.S. policy in the Middle East. Leon Hardar's "Sandstorm" presents a clear picture that U.S. policy follows an obsolete Cold War paradigm that incurs huge costs. It is heading for a "destructive disengagement." His remedy: less U.S. intervention, more European involvement, and a re-orientation of Israel's foreign policy. Hardar knows the complex history of the Middle East, and that gives his book much authority.

Shining the light of common sense on our Mideast policy

Published by Thriftbooks.com User , 16 years ago
I first heard Leon Hadar talk about "Sandstorm" in a lecture he gave in Washington DC on 9 July 2005. He began by quoting from a previous book of his, "Quagmire," which was an eerie experience, in that the excerpts could have been written yesterday. Thus, in the early nineties, Hadar predicted an Arab backlash against U.S. policies in the Middle East unless we acted to change those policies. Of course, nothing was done, and the result is obvious. From the vantage point of the large power blocs, Hadar's diagnosis and remedy are quite rational, and it is to his credit that he doesn't believe for a moment that the United States will follow his commonsense advice. Churchill once remarked that the United States could always be counted on to do the right thing after it had exhausted all of the alternatives, and our strategy in the Middle East is no exception. Instead of changing our faulty, Cold-War-derived paradigm, which dictates that we shall foolishly try to dominate the region, we shall (says Hadar) eventually be caught up in a "destructive disengagement"--U.S. defeat and withdrawal. Change not by intelligent understanding and action, in other words, but by not being able to win the unwinnable. (What did we really learn from Vietnam, one has to ask.) Our Mideast paradigm or policy makes no sense, and most Americans seem to be unaware of the fact that if you factor the price of two Gulf wars and a pax americana in the Middle East into the cost of gasoline, the real price at the pump is far in excess of the $2.50 a gallon we are currently paying. As for American policymakers, since they seem to believe that every problem in the world is or should be an American one, we are effectively up the proverbial creeek. Defeat and withdrawal become the only "options." Empire, says Hadar, thus has its costs, and he is right to call the Democratic version of the American commitment to it "empire lite." (I'm reminded of Gore Vidal's remark that in the United States there is one political party with two right wings.) Empire dictates that we try to control Mideast oil reserves, not so much for ourselves, but so that we can have leverage over Europe and Japan, which get a large fraction of their oil from that region. If we had the brains to get out of the empire business, says Hadar, we would, in effect, turn the Middle East over to the Europeans. Why monitor the Middle East for the E.U.'s benefit, after all? It's *their* oil supply, says the author; let *them* do it. As for Israel, it should join the E.U., not continue to act as a "crusader state" for the United States in the Middle East. Unfortunately, we don't seem to have the brains to cut bait here, or to give up an empire game that is nothing less than a huge hemorrhage. "Sandstorm" is, in short, an enlightened piece of work, which is a sure-fire guarantee that its recommendations will be ignored. On the level of Kissinger-type power politics, i.e. of Realpolitik, Hadar's solution is the onl
Trustpilot
Copyright © 2022 Thriftbooks.com Terms of Use | Privacy Policy | Do Not Sell My Personal Information | Accessibility Statement
ThriftBooks® and the ThriftBooks® logo are registered trademarks of Thrift Books Global, LLC