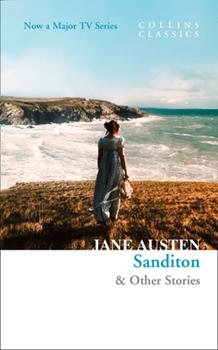 HarperCollins is proud to present its incredible range of best-loved, essential classics. Young Charlotte Heywood arrives in Sanditon, a newly established seaside resort, with the Parkers: patrons and enthusiastic promoters of the town. Just as the town seeks to reinvent itself as a fashionable destination, Charlotte Heywood attempts to begin anew amongst its residents. As she begins to settle into Sanditon society, with the Parkers and the rich widow...

Published by Thriftbooks.com User , 14 years ago
Jane Austen's now famous unfinished novel is a wonderous read regardless of the fact that she died before she could give it a proper ending. Sanditon tells the story of a family taking a summer holiday at their estate near the shore. While the dynamics of the story are better left for the reader to find out, I simply want to say that it was clear to me upon reading it that Jane Austen was beginning a growth in her journey as a writer. While this final novel may be more in line with her books baring an estate title, Jane Austen here clearly demonstrates a new passage into understanding of her subjects. Her earlier works, I always felt, while awesomely written, were observed with intense stunning detail. In this last novel Jane Austen seems to be more aware of the underlying current of sexuality between her characters and more so than her other novels, begs the question, what happened to these characters? Sanditon exhibits Jane Austen at her finest, it is a shame that time and death does not discriminate who it takes from our world.

An enjoyable volume of miniatures by Jane Austen

Published by Thriftbooks.com User , 21 years ago
For all the people who know already Jane Austen's six published novels, this volume will be another opportunity to admire the genius of the British author. This volume begins with two unfinished novels. Sanditon, begun in the last year of Jane Austen's life, deals with issues unknown in her other novels, like the culture of commerce and hypocondria. The Watsons, begun in 1804, is a work more similar to Jane Austen's most known work. Both writings are delightful. However, perhaps even more delighful are some of the other works on this volume. Lady Susan, a short epistolary novel about a scheming widow, is one of the most ironic and original works by Jane Austen. And last but not least, there is Jane Austen's juvenilia, works created when the author was between fifteen and eighteen years old. These miniatures are a testimony that the humor and mastery of language of Jane Austen was present at an early age. Among the best of the juvenilia are Love and Friendship, the very partial history of England and Jack and Alice. All of this early works (which were occasionally quoted on the film Mansfield Park) present a very sharp humor. There are also at the end poems and three prayers.The excellent edition and introduction by Peter Washington makes this Everyman's Library volume a must for all fans of Jane Austen and English literature.

A Little Bit of Everything

Published by Thriftbooks.com User , 21 years ago
I read this book beacause I am a Janeite. I had been looking for a volume of Juvenalia, but I bought this instead. It is a must for anyone who likes Jane Austen. It includes her juvenalia (all three volumes), her poetry, two of her prayers, leters, Sanditon, Lady Susan, and The Watsons. I liked the "History of England" and I absolutely adored Sanditon (even though it is just a fragment). There are many fragments in this volume and unfinished works, but they are wonderful to read even though they laeve you wishing that there were an ending. I also noticed that this volume included "Venta" which was written shortly before Jane Austen died. It is full of Jane Austen's delightful satire and includes many pieces which I found delightfully funny. I enjoyed reading Love and Friendship simply because of its wonderful quotes like "run mad as often as you choose but do not faint". I would reccommend this to any Jane Austen fan and even some non-fans. My best friend had never read Jane Austen before and now she is a Janeite for life. One thing that I like about this book is that it is a well-made hardcover book and will not fall apart on me after multiple readings and rereadings!
Copyright © 2020 Thriftbooks.com Terms of Use | Privacy Policy | Do Not Sell My Personal Information | Accessibility Statement
ThriftBooks® and the ThriftBooks® logo are registered trademarks of Thrift Books Global, LLC