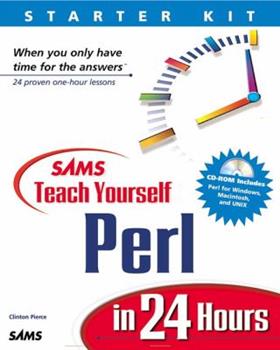 Sams Teach Yourself Perl in 24 Hours

(Part of the Sams Teach Yourself Series Series)

This book teaches novices the basics of the Perl language, and pays special attention to features that most trouble new users. They can then interact with their file system, OS, and network environment to create such useful CGI programs as data collection, shopping cart, server push and email forms.

Published by Thriftbooks.com User , 22 years ago
Well, at least the version I bought in march 2000, version 5 I think, doesn't have those. the book is error ad typo free, and all the programs run perfectly. Now to the meat: When I began reading the book I knew perl does stuff on the web. That's all, really. Readin onl 8 hours of it, I've already developed various cool programs, reached the third level in perlmonks.com - a site for perl freaks, and saw I can really help people! The learning curve is amazing. Although It's not really 1 hour for each class, at least for me, It's 1:30 or so. I'd really, really suggest this... You can viably *SEE* your progress... It's amazing how after a week of reading the book you feel you know everything about the language: recursion, arrays, and everything there is in any other language, MASTERED by you. Spend a week more (to get to hour 14) and you... I cant describe it. The first time I feel so comfy with a programming language. MUST BUY.

Published by Thriftbooks.com User , 22 years ago
This book is good for two kinds of people -- people who need an introductory text to Perl (especially if they don't have a strong programming background already); and people who are doing CGI programming. (Of course, you could happen to be both kind of person at once -- a not-advanced programmer picking up Perl to do some CGI programming.) No other Perl book I've seen so far manages to serve both audiences so well.The part of the book (the first 3/5ths or so) that's intro to general Perl is good, clear, and free of any typos I've noticed. The current printing I saw tended to scrimp on whitespace (so you see "$x=$y*stuff($z)" instead of somehting more like "$x = $y * stuff($z)"), but I don't think it's /too/ much of a problem; and I've emailed the author and he says he'll see about getting that changed in later printings.The section on CGI is the real windfall here. I'm sure that the author could have just banged out a chapter or two of "Hello World" CGIs plus a form2mail and a guestbook, and called that it; and the book would probably have sold just as well from casual buyers.Instead, he ended up writing the absolute best and most careful discussion of CGI I've seen to date. Most importantly, if you're a new-to-CGI programmer and you read this book, I think it'll steer you clear of the nastier pitfalls better than any other book I've seen. That includes things that work but that open security holes, as well as things that just don't work.And, incidentally, the book doesn't cost much, so I can recommend that even an advanced CGI programmer (even one not coding in Perl!) go and plunk down the ~$20, just because the long (about 2/5ths of the book, it seems) and deliberate section on CGI is bound to discuss /something/ you didn't know. I, for example, particularly benefited from the comprehensive and patient discussion of the benefits and limitations of the various ways to pass session-state around between CGI program instances.

Published by Thriftbooks.com User , 22 years ago
To be marketable in the IT world, you must be versatile. I recently spent a great deal of time interacting with HR people from several local companies as part of a new program in accelerated training at a local community college. In our talks, one theme was nearly universal, in that a generalized skill set and an ability to learn quickly was preferred over expertise in one particular area. Achieving this versatility is not easy and requires quality resources. Recently, it was necessary for me to learn the Perl programming language in a hurry, and this is the book that I used. In less than a week, I was able to understand and teach the basics of how to write Perl programs as part of web page design. The lessons here are all short and to the point, ideal for experienced programmers who are time challenged. Over the years, I had looked at Perl from time to time, but never felt the urge or need to learn it. As a C/C++ programmer, the syntax was odd (different) enough to keep me away. That was a problem when going through this book, old habits do indeed die hard, but not enough to significantly slow me down. The clarity and brevity of the examples was enough to overcome this not insignificant hurdle. A CD containing a recent implementation of Perl, the source code for the examples and other Perl tools is included. This allows you to get started right out of the shrink wrap without spending any additional money. It may not seem like much, but I always prefer having the source code on a CD rather than having to go to a web site to get it. The extra convenience really appears out of proportion to what it is. Perl is a language that is powerful and seems to be growing in use. Much of that is due to the explosive nature of the Internet and business on the web. However, some of the change is also a consequence of the growing realization among employers that one language does not do it all, that solutions can often be coded much quicker in another language. Furthermore, a diverse skill set is now being recognized by more employers as their most valuable asset. If you are one who needs to make that improvement, then this book will work for you.

Published by Thriftbooks.com User , 22 years ago
There was a time when all you needed to know was C and Cobol. However since I last played with either of these languages, countless more have been introduced, CGI, Java, Perl C++, J++ etc etc.. I have tried to learn them but hate manuals and rarely read them. I find most are badly written and I lose interest VERY quickly. However, up until now I have avoided needing to learn any new languages. That has changed recently and I have had no choice but to pick up a Perl book and learn it. So I was surprised when after an hour in B & N reading all the perl books that I came across this one. It actually 'talked' to me in a way I liked and more importantly, kept me interested.For a beginner, it is an excellant book and I would have no problems recommending it to anyone. It does come with it own CD which has the Perl language. Also all the code and examples are on the CD. If you are a beginner, don't buy the impressive looking 1200 page book, it will just gather dust.

SAMS does it again! A must for every webmaster!

Published by Thriftbooks.com User , 22 years ago
Forget the CGI Cookbook, this is the book you really need if you want to learn the ins and outs of perl without muss 'n' fuss. The lessons are simple to follow but still contain valuable information for the perl novice. For those who are already incorporating perl scripts into their websites, TYP in 24 hrs is the perfect tool for understanding the syntax and functions of many common perl-cgi scripts. With just a little practice and patience, you too can be putting together your own perl programs for on-line use! I highly recommend this book. Even those who are not familiar with free-form programming methods will find the instructional methods superb! Those familiar with even BASIC programming will find the descriptions and analogies simple to follow.SAMS does it again!
Trustpilot
Copyright © 2022 Thriftbooks.com Terms of Use | Privacy Policy | Do Not Sell or Share My Personal Information | Accessibility Statement
ThriftBooks® and the ThriftBooks® logo are registered trademarks of Thrift Books Global, LLC