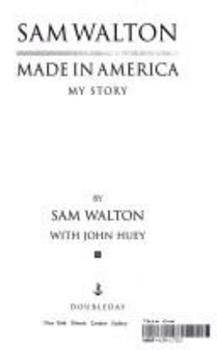 Sam Walton: Made in America

Meet a genuine American folk hero cut from the homespun cloth of America's heartland: Sam Walton, who parlayed a single dime store in a hardscrabble cotton town into Wal-Mart, the largest retailer in... This description may be from another edition of this product.

A retelling of the great American mythology

Published by mikayakatnt , 2 months ago
A retelling of the great American mythology: Anybody can make it in this country. Work hard and your rewards will be plenty. Sam Walton comes off as humble, lovable, and homespun. He takes time to explain his philosophies on business and life. The quotes by those who worked with Sam add another layer of content to the book. These quotes add in some fun stories but also show that Sam really does "eat what he cooks." Would have loved to met Sam while he was still alive. This is a classic business novel that shows hard work can pay off. Whether that is true in today's America is up to debate. Yet, Sam addresses this question in the book by answering it with a resounding "yes, you can." Living in Bentonville may have influenced what I got from this book. Even so, I see the influences that Sam has had on this town. I also see what Walmart is doing to rediscover their roots that Sam Walton placed years ago in this book. Seems as if people keep coming back to this book for inspiration. 4.5/5. Rounding up to a 5/5. A must read for those interested in American business. I've read many business books, but this is one of the few that I loved from beginning to end.

Published by Thriftbooks.com User , 17 years ago
Through a mix of small-town America patience, friendliness, hard work, and a great learning adaptability, Sam Walton was able to create the largest retail vendor in the world - all headquartered in tiny Bentonville, Arkansas. This is a business-man's journey from small Dime Store owner to the CEO of the multi-billion $ generating Walmart chain. Among the treasures of this book are the ways in which Walton describes adapting his operations and distribution control as Walmart increased in size, methods of scouting out expansion opportunities (i.e. Flying by plane to see where roads and new housing development were being constructed, island placement), quail hunting excursions, and the thinking processes within Walton and those decision-makers close to him as Walmart evolved along each step of the way. A must read for any entrepreneur as the creation of a legend is inscribed here in the legends own words.

Why Wal-Mart is where it is now!

Published by Thriftbooks.com User , 17 years ago
I definitely see why Wal-Mart is the largest retailer in the world! This is a step-by-step guide on how to create a successful business. Anyone can do it as long as he/she is motivated, dedicated, selfless, flexible, passionate and a lifetime learner. (Easier said then done, right?!) I enjoyed the writing style. He wrote personally and I enjoyed the comments provided by the people that he was referring to. It added another personal touch making it seem like Sam was not just making stuff up. REGARDING SAM Sam Walton was an amazing man. He was always learning and flexible. He is the role model that many business people should follow in order to be successful. TAKE AWAY Another interesting thing that many of today's CEOs can learn from Sam is to learn from their people. If nothing else, all leaders in all types of organizations can learn from this! (This is actually a cornerstone of my company's philosophy.) This is definitely another book to add to Esenai's corporate library...

Published by Thriftbooks.com User , 18 years ago
I have been interested for a while about the life of the man behind the Wal-Mart empire. And the man who would've been the richest man in the world had he been alive today. This book was an enjoyable first hand account written by the man Sam Walton himself in his own words. With some comments from some of the key people in his life. I felt that I kind of got to know Mr. Walton personally as I read this book. He also, of course, has some great insight on how to build and run a successful business. I highly recommend this book, whether you want to learn more about Mr. Walton himself or just Wal-Mart. Also has some great black & white as well as color pictures included in the book.

Published by Thriftbooks.com User , 22 years ago
Think about it. A small time variety store retailer out of Bentonville Arkansas creates the most power retailing jaggernaut of all time, and right in the faces of powerhouses like Sears, K-Mart and JC Penny. If you are in any kind of a business with customers, you will benefit from this book, and experiencing the laser like focus Sam had on delivering the absolute best in his stores. Walton is to retailing what Jordon was to basketball, an absolute master of his art. I read this book several years ago, and as a retailer, I still refer to it, as much for the specific business tactics as to remind myself as to how Sam thought about things, and how he managed his people. An absolute classic.

Published by Thriftbooks.com User , 22 years ago
Sam Walton is a legend in the retail business. Building on core values, he created a whole new business concept that grew to become the largest retailer-the largest company-in the world. How did it happen?In Made in America, SamWalton and his writer, a FORTUNE senior editor, take the reader through a chronological adventure of how a man started with nothing and gradually built an empire. He based everything he did on particular values that really made sense, though they were radical for his time and his industry. Gaining an understanding of those values, their sources, and their impacts, helped me better grasp my own values and business management philosophy. Sam came up with a lot of innovative ideas, but was unabashed in his drive to glean ideas from his competitors. He had a knack for snatching someone else's idea and growing it into something really significant. Reading about these adventures was fascinating. I couldn't put the book down . . . and I thought I knew something about Wal-Mart!Particularly interesting was insight into the unique culture of Wal-Mart and how it was created and nurtured. Educational, inspirational, stimulating. A great read!
Trustpilot
Copyright © 2022 Thriftbooks.com Terms of Use | Privacy Policy | Do Not Sell My Personal Information | Cookie Preferences | Accessibility Statement
ThriftBooks® and the ThriftBooks® logo are registered trademarks of Thrift Books Global, LLC