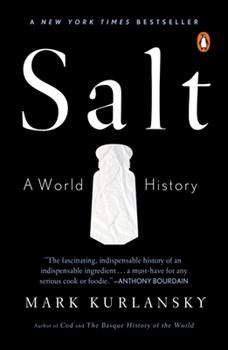 "Kurlansky finds the world in a grain of salt." - New York Times Book Review An unlikely world history from the bestselling author of Cod and The Basque History of the World In his fifth work of nonfiction, Mark Kurlansky turns his attention to a common household item with a long and intriguing history: salt. The only rock we eat, salt has shaped civilization from the very beginning, and its story is a glittering, often surprising part of the history...

Published by Mike D , 1 month ago
This was actually the first single topic book i read now probably 20 years ago when it first came out. Tracing salt thru history relating all the technological, political and culinary developments this book is one of my favorites ever written. Since the first time i read it again mabie 2 years ago and it was just as good.

Published by Hobo Greg , 3 years ago
If you want the majority of your reading experience to consist of page-long excerpts *from other people's writing* than this is the book for you. What a clever idea, to have half your book made up of other author's work! Basically Kurlansky collected a bunch of recipes where salt is a main ingredient. There were only a handful of pages that actually dealt with the science behind why we need salt and how it is created.

Published by Thriftbooks.com User , 16 years ago
When you go from explaining the words "soldier" and "salami" have salt as their origin and why, right up to Tabasco Sauce and the McIlhenney Company of New Iberia, Louisiana and finally up to Morton Salt, well its how a 14 CD book can keep you fascinated. Excellent. I came in with few preconceived ideas but little more than a minor curiosity. This was a real treat.

Trade in salt and salted foods shaped economies for centuries

Published by Thriftbooks.com User , 17 years ago
"Salt; A World History," by Mark Kurlansky is a meticulously researched account of how trade in salt...and salted foods shaped global economies for centuries. The production of salt powered empires. Moreover, the salting of fish, fowl and hams fed soldiers and sailors for extended periods...allowing for the expansion of trade and military empires. The Roman Empire required salt for its soldiers and at times soldiers were paid in salt...which was the origin of the word "salary"...and the expression "worth his salt" or "earning his salt," according to Kurlansky. After the fall of Rome, Venice became the dominant commerical force in Europe. To this end, salt trade maintained Venice's palatial public building and the complex hydralic system that prevented the metropolis from washing away. Soon farmers in France discovered that curdled milk drained and preserved in salt made many different types of cheese. In Parma, Italy the production of salted "Prosciutto" ham and "Parmesan" cheese made the city famous. The same thing happened with the production of salted "Salami" in Felino and Genoa, Italy. However, a major factor in the prodcution of salted fish was the Medieval Roman Catholic Church's decision to forbide the eating of meat on religious days and the Lenten fast (40 days) and all Fridays. This was serious business...under English law at the time the penalty for eating meat on Friday was hanging. Consequently, trade in dried fish boomed...especially for Northern Cod, which had a white flesh with little fat (fat resists salt) and dried easily. Page after page of this book is filled with significant historical information on how salt impacted economies especially with sea vessels and river steamboats. The author also includes little tid-bits of information about the develpment of our language...particularly the origin of expressions. For instance, when early American settlers hunted they would leave red herring along the trail because the strong smell would confuse wolves which is the origin of the expression "red herring," meaning..."false trail." Finally, Kurlansky explains that "Generals from George Washington to Napoleon discovered without salt...war is a desperate situation...salt was needed to treat wounds, preserve food for soldiers and for the diet of the calvary's horses." Recommended. Bert Ruiz

Salt is not just food

Published by Thriftbooks.com User , 20 years ago
I learned a lot about salt from reading this book. Salt has been a symbol of preservation, power, oppression, health and wealth. Kurlansky takes the reader for a trip around the world to places like China, England, India the Middle East, and all over Europe to show how salt was found, made, used and valued. There are all kinds of information in this book. Salt was used to not only preserve food and also human bodies. Salt was used to make gunpowder. It has also been used to deice roads in the United States. Ancient people in China and Egypt got salt by evaporating seawater. People in Mexico evaporated urine and burned plants to extract salt. I learned a lot about geography and places like Parma and the Po River in Italy where Parma cheese was first made. I learned that the area around the Dead Sea was not only a great source of salt, but also a tourist attraction with hotels and health spas.I did not know people died for salt in the Civil War. Millions of slaves died making salt in mines and wells. The South actually lost the war because it could not produce enough salt to feed their armies. Making salt was a way to actually avoid military service. Salt became a symbol for all the injustices of government. By the late 18th century more than 3000 French men women or children were sentenced to prison or even death for crimes like smuggling against the salt tax called the gabelle. Women hid salt in their breasts, clothing, and even their posteriors. Smuggling was also widespread in China where the salt smuggler was seen as a hero fighting the evil salt administration. The gardens of one Chinese province has become a tourist attraction because of the salt smugglers. The British controlled the use, production, and the cost of salt in India until Gandhi's historic salt march in 1930 in which he defied British law by merely picking up some salt off a beach. This book is also filled with many interesting recipes using salt with ingredients like sauerkraut, anchovies, salted beef, and honey. This is a wonderful book, because it covers so many interesting subjects. This book makes salt fascinating.

Salt shook up my thinking...

Published by Thriftbooks.com User , 20 years ago
Mark Kurlansky's SALT: A World History shook up the way I viewed this seemingly ordinary condiment. Incredibly well researched and at times, quite humorous, SALT took me on a wild journey from the ancient brine wells of China to cheese-making in France and Italy. I encountered early Celtic salt miners in Austria and accompanied Gandhi on his historic "salt march" to India's independence. Mr. Kurlansky sprinkles this delightful narrative with customs, folklore, even some ancient recipes. SALT is terrific and lots of fun to read!

Published by Thriftbooks.com User , 20 years ago
While different than Anthony Bourdain's Kitchen Confidential, this book should be equally, if not more, popular among "foodies" and history buffs alike. Kurlansky takes what now is an everyday commodity and reveals its astounding historical importance. Filled with fascinating facts -- (e.g. both "salary" and "salacious" come from the same root) -- Kurlansky tells a masterful -- and true! -- story of world history through the trail of single mineral. (Just a few of the characters who make an appearance are John Adams, Daniel Boone, Ghandi, Christopher Columbus, Captain Cooke, Sigmund Freud, Theodor Herzl, Kublai Khan, Louis IVX, Mao, Leonardo (Da Vinci, not DiCaprio) -- now what book can give you that cast of characters !)By the way, there are about 20 wonderfully unique recipes in the book as well. This book is a wonderfully rich, hearty stew!

Salt: A World History Mentions in Our Blog 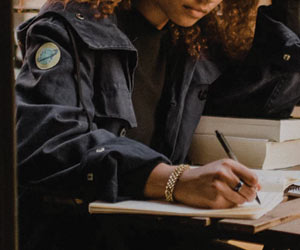 Back to school time means beach reads come out of your bag and textbooks go in, but that doesn't mean the fun is over. While we (obviously) embrace all things learning and reading (because books), even we have to admit that some textbooks are a bit, um...dry. To ease the transition, here are 22 alternative academic titles that are entertaining, practical and, well, educational.