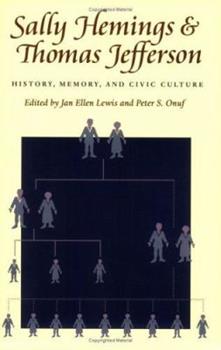 (Part of the Jeffersonian America Series)

The publication of DNA test results showing that Thomas Jefferson was probably the father of one of his slave Sally Hemings's children has sparked a broad but often superficial debate. The editors of this volume have assembled some of the most distinguished American historians, including three Pulitzer Prize winners, and other experts on Jefferson, his times, race, and slavery. Their essays reflect the deeper questions the relationship between Hemings...

Published by Thriftbooks.com User , 13 years ago
If Herbert Barger gives this book a negative rating then that means it's good. Herbert has a dog in the fight, as his wife is one of the white Jefferson descendants denying the whole Sally Hemmings thing, regardless of DNA evidence. This book is a good narrative of the controversy and I recommend it.

Published by Thriftbooks.com User , 15 years ago
Black oral family histories were painstakingly recollected and passed down from generation to generation.The only possessions black families were allowed to possess were their memories- powerful and precious they were,and accurate as well.It is a tragedy that the descendants of Sally Hemmings are criticized for bringing forth what they already knew to be truth.To quibble over the fact that Jefferson's brother carried similar DNA misses this book's point entirely-Hemming's children had been told who their father was.Her descendants knew!The DNA evidence confirmed it.The central message of this book is not about the biological evidence,however.It is about the psychological and cultural issues that cause us to react in extreme ways(anger, fear, disbelief)to complex racial issues, particulary those regarding sexuality.In this respect the book is outstanding.It causes each of us to examine our personal and cultural viewpoints from both black and white perspectives. Americans of all races will benefit from reading this book.

A compilation of critical essays

Published by Thriftbooks.com User , 21 years ago
The problem with books about history is that they are almost always an interpretation: the author's. At best the author is willing to share the conflicting evidence with his reader, at worst the author omits it and pretends it doesn't even exist. But even the most faithful author can't put everything in a book so a selection has to be made. That's why the critical reader ends up reading a lot of books about the same subject. To be able to grasp most of the material, evidence and theories that are circulating. That way he/she is able to form his/her own opinion about an issue. But if the issue is Thomas Jefferson & Sally Hemings the reader will likely end up digging through tons of material and will still be very confused and very indecisive. Until recently one of the only books on the topic worth reading was Anette Gordon-Reed's "Thomas Jefferson and Sally Heming: An American Controversy". Because of it's painstakingly revealing of the mistakes, omissions and lies that previous writers had committed and for it's refusal to take a final stand.This book however was written after the 1999 DNA tests that revealed that Thomas Jefferson very likely fathered Sally's last child Eston. And that he didn't father Thomas C. Woodson. But one has to keep in mind that the recent testing still don't prove Jefferson's paternity exclusively. Another male relative from the Jefferson line could have fathered Sally's last child, since they share the same Y chromosome. The book offers a number of refreshing essays written by scholars. Each one of them looks at the relationship from his/her own field. Trying to describe and explain what this new evidence means to themselves and their previous writings and views on TJ. Sometimes describing how they fell into the trap that so many historians fell into when dealing with TJ. They also try to describe the way the American mind thought about TJ and how this new evidence will influence peoples views and opinions. The strength of the book is that it has been written after the revealing DNA tests. It also presents a lot of authors, each with his/her specific knowledge, views and convictions. Rather than just one author. But the really weak point is that the book fails to give a clear outline and explanation of the recent DNA test. That's the chapter that it should have started with. Since that test is the core, the very foundation upon which all these "revisionist" writings build. And also because a test like this needs explanation: not everyone is familiar with cellular biology and what it really means.
Copyright © 2020 Thriftbooks.com Terms of Use | Privacy Policy | Do Not Sell My Personal Information | Accessibility Statement
ThriftBooks® and the ThriftBooks® logo are registered trademarks of Thrift Books Global, LLC