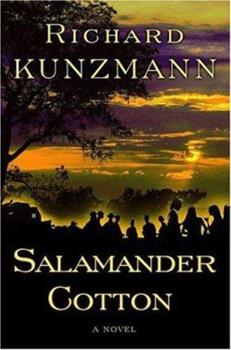 (Book #2 in the Jacob Tshabalala Series)

The dark heart of South Africa

Published by Thriftbooks.com User , 14 years ago
Not since the late James McClure's Kramer and Zondi novels has a crime writer taken readers so deeply into South Africa. Where McClure exposed the brutality and minutiae of the apartheid era, Richard Kunzmann sets his novels in the present - a present with deep roots in the past. His second novel, "Salamander Cotton" opens with the murder of an old man, Bernard Klamm, who dies a more horrible death than anyone deserves. Or maybe no cruelty is too horrible for Klamm, who, Johannesburg Detective Jacob Tshabalala soon learns, grew rich on the blood of black asbestos miners, kept a cache of horrifying child pornography and may have killed his own daughter 39 years earlier for taking a black lover. But this, too, is a picture soon blurred and shaded as Jacob realizes the answers lie in the past, in the isolated mining town of Leopold Ridge where Klamm made his money and his daughter disappeared. But the city's budget won't stretch to this. So resourceful Jacob arranges for his former partner Harry Mason (who retired after Kunzmann's debut "Bloody Harvests") to be hired by Klamm's estranged wife. She wants someone to investigate her daughter's disappearance and this is a job, Jacob is sure, which will help solve Klamm's murder. The center of the book belongs to Harry as he pokes into forbidden places in the dangerous town, where thugs administer the law and ghosts roam the hills. Point of view shifts mostly between Harry and Jacob, with some views from secondary characters including a vicious cop and a frightened dying man, which flesh out the complex narrative. Various subplots and a narrative that moves back and forth in time gives the novel added depth, but also requires a bit of attention on the part of the reader to keep things straight. Kunzmann makes it well worth the effort.

Published by Thriftbooks.com User , 14 years ago
Richard Kunzmann proves that "Bloody Harvests", his debut novel, was no fluke as he follows up with "Salamander Cotton", another gripping and grisly tale of crime and culture in South Africa that is as intelligent and stylishly-written as it is bloody and brutal. The author's smart and sophisticated style raises this far above the average blood and guts cop thriller, weaving murder and mayhem with racial tension and a culture that is uniquely South African. Kunzmann wastes no time getting the reader riveted in place, opening up with the graphically barbarously creative murder of Bernard Klamm, a retired ex-mining boss, in Johannesburg's affluent suburban home. Back on the case is Detective Inspector Jacob Tshabalala, as calm and understated as he is competent. But it doesn't take Sherlock Holmes to find out that Klamm was a man with many enemies and few friends, a near monster of a man who, even despite his open outward callousness, was hiding deeper, more sordid secrets. Overwhelmed with the scope and implications of Klamm's murder, Tshabalala lures former partner Harry Mason, retired from the force after his wife's murder, back into action to help investigate, representing Klamm's estranged widow as a private detective. From there, Tshabalala and the murder almost take a back seat, serving as mere backdrop for a complicated and engaging tale of the South Africa's asbestos mining industry (the title refers to the native American's name for the fibrous and heat resistant mineral). While Kunzmann succeeds in keeping the story racially balanced, avoiding the hand wringing melodrama and indignant outrage that can easily overwhelm the plot with difficult subject matter like this, the conditions to which the asbestos miners were subjected is nonetheless disturbing. Meanwhile, Mason's probes of the unsolved decades-old disappearance of Klamm's own daughter takes on a life of it's own, the locals convinced her vengeful spirit haunts young teenaged girls in the vicinity of Klamm's abandoned mines. And if that's not enough to keep you busy separating plot threads, throw in Klamm's callous widow and her oily live in architect lover to add to the mystery and intrigue. In short, a broad and ambitious effort succeeds in building the suspense and mystery of a good old fashioned whodunit, while at the same time illuminating the "other" fascinating subculture "down-under." Kunzmann is a talented young author that deserves wider acclaim - "Salamander Cotton" is an unusual read and a great place to get to know him.

Published by Thriftbooks.com User , 14 years ago
In Johannesburg Police Detective Inspector Jacob Tshabalala investigates the homicide of elderly former mining boss Bernard Klamm. The murder was extremely brutal and Jacob wonders if the violence ties back to the victim's extensive pornography collection. He also learns that the divorced Klamm was once married to a Henrietta Campbell and their daughter vanished without a trace three decades ago making the sleuth ponder if that is the key clue or just a coincidental red herring. As the official investigation goes slowly, Henrietta hires private investigator Harry Mason based on Jacob's recommendation re his former partner, to dig deep especially in the Northern Cape where Klamm owned a remote farm. Mason checks into the three decade old disappearance of their daughter to see if the present killing is linked. He is unprepared for corporate cover-ups of asbestos mining effects on the workers and angry acrimonious people seeking vengeance to what has occurred to them due to avaricious irresponsibility. This starts off as an exhilarating South African police procedural, but turns into an exciting private investigative tale that ties the 1960s with the 1990s. The whodunit is fast-paced and filled with twists and red herrings. The contrasts between the two eras are incredibly striking and enhance a strong murder mystery that like the first Tshabalala-Mason team-up (BLOODY HARVEST) will enthrall the audience with its insightful look at South Africa through the eyes of the two sleuths. Harriet Klausner
Trustpilot
Copyright © 2022 Thriftbooks.com Terms of Use | Privacy Policy | Do Not Sell or Share My Personal Information | Accessibility Statement
ThriftBooks® and the ThriftBooks® logo are registered trademarks of Thrift Books Global, LLC