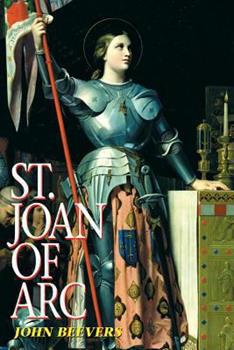 The 19-year-old saint who defeated England in 15 months, saved her country, crowned its king, and changed history was burned as a heretic. Yet 500 years later, she was canonized and became the patron saint of France. A unique and almost unbelievable story 192 pgs; PB

Powerful without the feminist mythology!

Published by Thriftbooks.com User , 17 years ago
I'm a woman and I'm all for female heroines, but so many of Joan's biographers err on the side of feminism. John Beevers does not. He shows her as a real, solid, Christ-centered young lady who led a nation in a time of peril. She was called for a specific purpose and this book gives the most realistic, unfabricated version of her life. One of the best biographies I have ever read. I couldn't put it down!

Published by Thriftbooks.com User , 22 years ago
This exciting biography manages to bring to life the mood of 14th Century France and to give a vivid portrait of "the Maid" from contemporary accounts, which are always clearly credited.Beevers achieves this without missing the point of Joan's canonisation, so often misconstrued as being due to patriotism or even to some kind of early feminist or anti-establishment streak, with which some always try to retrospectively credit her.After a simple account of what we know of her family life, and riveting detail in the battles and her attempts to reach the Dauphin, Beevers gives an accurate and crystal-clear historical summary of her trials, including much excellent background on the personalities involved.This book makes a wonderful spiritual and historical gift for a teenager, and is scholarly, highly readable and inspiring. It is the perfect choice for those who seek Joan's true story without any ideological trimmings.
Trustpilot
Copyright © 2022 Thriftbooks.com Terms of Use | Privacy Policy | Do Not Sell or Share My Personal Information | Accessibility Statement
ThriftBooks® and the ThriftBooks® logo are registered trademarks of Thrift Books Global, LLC