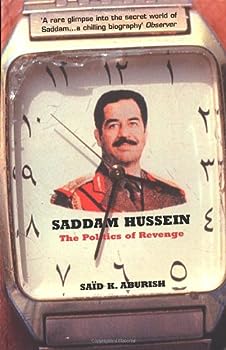 Saddam Hussein: The Politics of Revenge

In Saddam Hussein- The Politics Of Revenge , the author draws on his own knowledge of and extensive contacts within the Arab world to produce a thorough and penetrating psychological profile of the... This description may be from another edition of this product.

Published by Thriftbooks.com User , 18 years ago
Now, perhaps more than when Saddam was in power, this book is required reading in understanding the current situation in Iraq.As Aburish so clearly illustrates, for decades the US supported Baath Party and Saddam Hussein. In the process they back stabbed on more than one occasion the Kurds, the Shia and other groups who opposed Saddam. This betrayal has certainly been a contributing factor to the situation as it exists now (2004) with various insurgent groups attacking US forces. While it's true that some of these groups are coming from external influences (e.g. Syria and Iran), it's also true that some are just people who view the US as a hostile occupying force. Part of the distrust came from the history Aburish describes here.The notion that Aburish is somehow "anti-US" misses the point entirely. The US policy toward Saddam post Gulf War I was one of of "positive containment." As explained by a member of the National Security Council in 1991: "Our goal [was] to remove Saddam Hussein, not his regime." This meant that we actively prevented other groups from overthrowing the regime. Indeed, as reported by the major media, Kurdish and Shia rebel leaders were told during a coup attempt orchestrated by the CIA that they should "not get in the way of our operation."How could we have dealt with Saddam? This is perhaps a weakness of Aburish's book, but it's one created in part by a totally warped US policy. At one point can we go back in time and stop supporting his brutal regime? Since we can't go back in time, how can we change our actions so that they represent true American ideals? In this manner of thinking, Aburish's analysis actually wasn't that far off. In the long haul we might have gotten rid of Saddam by a policy that supported the Iraqi people instead of one that resigned them to victims of both their own government and the US dominiated UN policy of genocidal sanctions - a policy that ultimately strengthened Saddam domestically.With Saddam now gone from power this book is perhaps a little dated. However, it is necessary reading if you want a better understanding of the current quagmire created by the US invasion.

Published by Thriftbooks.com User , 19 years ago
Aburish's biography of Saddam Hussein is a refreshing retelling of a story that's been muddled by a decade or more of half-truths and lies. The strengths are that he himself took part to a large extent in dealings with the Iraqi regime during the decade of the Iraq/Iran war. Aburish's insights and commentary are invaluable. The weaknesses in the book become readily apparent. Said has some duplicity in the regimes attempted acquisition of a nuclear [device] and other weapons of mass destruction. Said is also anti American and anti British. When he addresses US involvement in the Gulf War his arguments become tirades against Saddam , the US and Britain. It's his very ant-US and British attitude that make Aburish's recommendation for dealing with the Iraqi regime nothing but a mechanism for the continuation of oppression by Saddam and the so called Ba'athists.Aburish's own involvement in the regime and view of the US aside, I highly recommend this biography of Saddam Hussein. He sets right many misconceptions about the Iraqi dictator. His mother was not a prostitute and Saddam didn't commit [destruction] at the age of 15. These myths and other myths are dispelled. What Aburish does is to emphasize the tribalness of Saddam by setting it in the context of Arab culture. Saddam becomes less a madman than a ruthless tribal leader for whom you are either with the tribe or against it. Opposition to the regime is treated like a blood feud. Even Saddam's affinity for Stalin makes sense. Both were the sons of poor peasants widowers in semi-tribal societies (Stalin was ethnically Georgian not Russian) and both used control of the bureaucracy to help in gaining control of power. In spite of its weaknesses The Politics of Revenge is a highly readable and informative.

Published by Thriftbooks.com User , 21 years ago
Aburish has written a good book on Saddam Hussein. One has to remember that it is part of the writing process to understand your readers' perspective. So, in this case it means that Saddam has to be judged by western standards. I have lived ten years in Iraq and liked especially Aburish Said's critical thinking towards horror stories that come from Iraq. I noticed while living in Saddam's Iraq (1980-1990) that iraqis tell all kinds of stories that are not to be taken literally. For example iraqis said that one European ambassador had slapped on the face of his European subordinate. The ambassador in question became very angry at such story. Of course it was true that this ambassador was angry, but to resort to physical violence is very serious matter in Europe. Iraqis just added this minor thing about hitting to illustrate how angry he was. I feel that in many cases stories that are coming out of Iraq are not exactly true in western sense. Aburish analyses well for example the case when Saddam killed his health minister. Iraqis hoped for peace, so they mixed their hope of peace with Iran to the fact that Saddam killed a minister. So story changed in the minds of iraqis, who thought that this minister had told something bad to Saddam in order to make peace with Iran. Aburish corrects many similar stories with his rational thinking. Of course it is true that Aburish has written his book mostly from his memory. So there are few mistakes. For example Saleh Ammash didn't die in 1975 (perhaps 1985 is correct). But these are minor things, because Aburish is so well informed about the Middle Eastern politics. It is always pleasure to read Aburishes books. His book about House of Saud is written with great wit.

Great and thorough coverage of the Iraqi pschye

Published by Thriftbooks.com User , 21 years ago
Aburish exceeds his own high standards in research and thorough analysis of the rise and reasons for the lack of a fall of Saddam Hussien. I couldn't put this book down. It's easy to read, even handed in its portrayal of the dictator, and comprehensive in explaining this product of brutal Iraqi history. Thanks to this book, I have a better understanding of Middle Eastern politics, the gulf war and the wests' continued involvement in the region. I throroughly recommend this book to anyone interested in knowing the whole story of the Gulf War and Iraq.

Published by Thriftbooks.com User , 22 years ago
Said Aburish's biography of Saddam Hussein is not so much a biography as it is a narrative of the author's interaction with the Hussein regime. The core of this very readable work is based on Aburish's business relationship with the Saddam Hussein regime in the 1970s and early 1980s, when he tried to procure arms and other material for Iraq.Around this core comes the rest of the book in which we are treated to a history of Iraq since the 1958 revolution, the origins of the "Beast of Baghdad," the Iran-Iraq War, and the Persian Gulf War and its aftermath. Aburish's work is very much needed; he locates Hussein within the context of modern Arab history, which is a breathe of fresh air for American readers.However, the book is in need of an editor. The farther Aburish gets from his real expertise-the story of his own relationship with the regime-the more details of other events become muddied. For example, he mistakes the ground offensive in the Persian Gulf War as beginning on February 22, 1991, when it actually occured on February 24. In addition he miscredits some of his sources. An example of this is the recent "Out of the Ashes: The Resurrection of Saddam Hussein." This latter work is by Andrew and Patrick Cockburn, not Andrew and Leslie Cockburn. Lastly, Aburish is given to painting his portrait of Saddam in overly broad strokes; Saddam will certainly be remembered by history, but Saddam won't change the study of history as Aburish claims. These criticisms aside, Aburish's book is still quite good and represents a fresh perspective on the problem of one of America's thorniest foreign policy issues.
Trustpilot
Copyright © 2022 Thriftbooks.com Terms of Use | Privacy Policy | Do Not Sell or Share My Personal Information | Accessibility Statement
ThriftBooks® and the ThriftBooks® logo are registered trademarks of Thrift Books Global, LLC