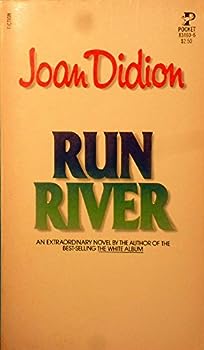 Joan Didion's electrifying first novel begins with a murder on the bank of the Sacramento River--a murder that is at once an act of vengeance and a blind attempt to shore up a disintegrating marriage. Out of that act, Didion constructs a tragic and beautifully nuanced work of fiction.

Published by Thriftbooks.com User , 15 years ago
This first novel by one of modern America's prose-writing treasures is set in a part of California no one associates with the Golden State: the Sacramento Delta. The emotional and physical geography of the book blend seamlessly. Didion has since critiqued this book herself, in her much later prose reflection on California, "Where I Was From." She's a bit hard on her former self. This is a lucid, hard etched short novel on the same general theme as Tolstoi's "Anna Karenina": that is, how a uniquely unhappy family got that way. Didion is of an old California family. She takes no false pride in that, here or elsewhere. There is not a useless or spongy sentence in the whole book. Writers will be reminded of what they're supposed to be doing when they pick up a pen.

Published by Thriftbooks.com User , 22 years ago
This novel is early Didion, wonderfully lyrical and dark, passionate without sentimentality, and beyond conclusions. It is homage to James Jones, to William Faulkner, perhaps a little to John Steinbeck, but mostly to a California now almost vanished. That California is mostly the settlers' California, but it is also a California felt and known aboriginally. She writes, as always, poignantly about things dying away: but the heirs live on and the Californian sun and hills, rivers and floods, carry on- the part of eternity we can know a little of. I liked this book very much, but the reader should be warned it is not a light read and not written as completely in Joan Didion's famously sharp style as her later works.

Joan Didion doesn't want you to know this...

Published by Thriftbooks.com User , 23 years ago
...but Run River is her finest novel. "Democracy" is excellent, but it is more a tour de force than a novel. Didion was only in her twenties when she wrote Run River, and it is a winner--stylish but never mannered (something you can't say about her subsequent novels), subdued, witty, assured, and filled with Valley (as in the Sacramento Valley) characters with whom Didion was rather obsessively in love. It is a pity that she seems more interested these days in writing about Washington insiders for N.Y.C./L.A. insiders. Everett McClellan, my favorite character in the book, would not have been able to sustain an interest in such figures as Henry Hyde and Kenneth Starr. That Didion can--even if only for the purpose of eviscerating them--is an indication of how far she has strayed from her literary roots. Ah, but what roots they were. Run River is an extraordinary achievement.
Trustpilot
Copyright © 2022 Thriftbooks.com Terms of Use | Privacy Policy | Do Not Sell My Personal Information | Accessibility Statement
ThriftBooks® and the ThriftBooks® logo are registered trademarks of Thrift Books Global, LLC