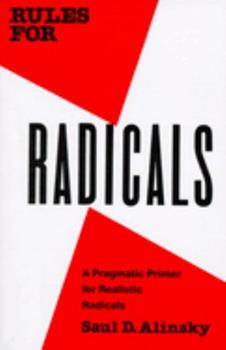 Rules for Radicals: A Pragmatic Primer for Realistic Radicals

"This country's leading hell-raiser (The Nation) shares his impassioned counsel to young radicals on how to effect constructive social change and know "the difference between being a realistic radical and being a rhetorical one." First published in 1971 and written in the midst of radical political developments whose direction Alinsky was one of the first to question, this volume exhibits his style at its best. Like Thomas Paine before him, Alinsky...

Published by JuneTest , 2 years ago
I think that Saul Alinsky is disingenuous when he represents the views of communities that he was never a part of. I laugh picturing him lecturing Black Panthers about “working within the system.” If a system is fundamentally opposed to your values and aggressively tries to disenfranchise you, how could you truly work within it? How could you hope to work within a system that strips you of your rights? Obviously radicals should try to build mass support for change, but that change should be precluded by the very institutions Alinsky tries to protect. Working outside the established system is the only thing that has ever brought about real change. The system itself has a too slow an inertia to accept change. Society is on course for environmental catastrophe, mass starvation, and the impending nightmare of climate change. Sometimes radical action is necessary in the short term to prevent devastation in the long term. I find his ideas about what is needed for a critical mass have been debunked by history. Small groups of people have always been the catalysts for major change.

The Best insights into the world view of our current administration

Published by Thriftbooks.com User , 13 years ago
This book will reveal uncanny similarities in ideology and precise buzz words and phrases such as "Hope and Change" and "Yes We Can" between the author and our current president. Knowing that President Obama was an admirer and student of the original Community Organizer, Saul Alinski, I found this book a must read to arrive at an understanding of their methods and motive. They are clear: Tear down the entire system by any means necessary. While I regret seeing book royalty money going to nefarious people and causes, I made the sacrifice in exchange of factual information and confirmation. You doubt? Read it...and weep.

What you are is what you were

Published by Thriftbooks.com User , 13 years ago
It's well known that Obama's early years were seriously affected by his association with Bill Ayres and the teachings of Saul Alinsky which seem to be codified and laid out in "Rules for Radicals." As an elderly citizen who is very interested in politics and extremely concerned about our country's direction I'm reading Rules for Radicals. Watching Obama's run for election, his rhetoric and every one of his moves it is frightening to see how much Alinsky's words are like a playbook for every thing Obama has done and said. I wish more Americans would read it if they could and understand it if they could but our present day under-educated government population couldn't handle it! Very sincerely, Charles M. Dean Woodstock, Ga.

Published by Thriftbooks.com User , 13 years ago
I rated this book 5 stars for one reason, and one reason only-- NOT because I like the book, but because it is very informative. This may well be the scariest thing I have ever read in my life!! It was very enlightening to read this book and realizing that several of our current leaders in the U.S. not only read and studied this book in college, etc.....but, that some actually believe in what it says and practice the principles of Saul Alinsky (even if you don't want to believe it-- get busy and do some "homework" on the topic. Facts are facts.) After understanding all of that and seeing the content of this book, if you aren't shocked, may God have mercy on your soul.

Published by Thriftbooks.com User , 13 years ago
I found this book very enlightening. I am not a politician but I wanted to know why people were comparing Obama to Alinsky! I beleive that this book is the blueprint and map that Obama used to get where he is now and God help us on where he is leading us!

Published by Thriftbooks.com User , 14 years ago
This book is a must read for all to understand radicalism and how their goals are achieved. This book was essentially the blueprint for the Obama campaign. Saul Alinsky and his views are admired by both Obama and Hillary Clinton.
Trustpilot
Copyright © 2022 Thriftbooks.com Terms of Use | Privacy Policy | Do Not Sell or Share My Personal Information | Accessibility Statement
ThriftBooks® and the ThriftBooks® logo are registered trademarks of Thrift Books Global, LLC