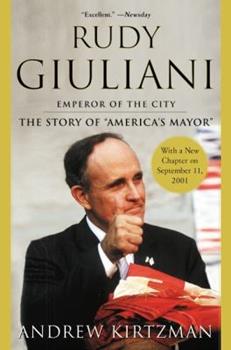 Rudy Giuliani: Emperor of the City

During his reign as the mayor of New York, the controversial Giuliani has been called many names. But after September 11, 2001, New York had new words to descibe him. In this riveting and updating edition, political reporter Andrew Kirtzman tells the story of Giuliani's tireless mission to cleanup, control, shape, and -- most recently -- heal New York City.

Published by Thriftbooks.com User , 21 years ago
I first set foot in New York City in late 1993, right before Giuliani entered the City Hall. NYC was a mess. I was scared riding in a car in Queens when the first time a 'spongee' came along to offer windshield wiping service. Or when riding in the subway we would not dare taking out a map or a camera,anything that could hint that we're tourists. Between 1996 and 1997 I went back and lived there for 9 months, which I enjoyed very much. During this time NYC was so absorbed into the new found prosperity and success of the financial markets/industry that I rarely heard people talking about the state of the city a mere 4 years ago. To say it's as safe as Tokyo is an exaggeration of course, but for such a high density big city, it was a hugely successful clean-up from 4 years ago. Homeless and graffitti is substantially less seen in the subway system. My friends and I would now have the guts to walk on the street at 3am...Then as time went on I heard the major had a lot to do with this change. And then I started hearing how local NYers describe Giuliani as such a fighter, never backed down from oppositions such as strike threat and stuff like that...After 911 WTC incident, I was very concerned about anything NY, having lived there for a little bit before. From the high-profile media appearance of Giuliani, I saw him maintaining the composure well enough to offer a symbol of calmness and toughness representing NY in the wake of the disaster towards the rest of the country and the world.Based on this and my past experience with NYC, reading this book is a joy. It's not just a story-book about how Giuliani came to power, how he succeeded and where he faltered, and from which an evaluation of his characteristics, philosophy and other inner traits. It's also an honest reflection of the social transformation of NYC during his 2 terms of mayorship. It's not easy for an average American to appreciate the unique nature of this society, whether it be racial, economic, crime or just social problems, because NY is so different from the American heartland. However, the book was particularly great for someone like me, who mostly knows the places and the background environment in which these incidents develop, but does not actually know the events described in the book much, if at all, because I'm not a local NYer. I thought the author has produced an honest account of both Giuliani's campaigns to the mayorship and also his major tasks and difficulties faced during the 2 terms. Being a journalist, the author has written the book in such a way that it reads very practical and fast. There's a lot of substance and facts in it, with quotes from many people around the major, which I think is a very direct and insightful way of peeping into the thinking/culture of the 'inner circle'. I think the author has done a great job connecting all these together to produce a seemless flow and smooth taste throughout the chapters of the book.For me who didn't know m

Published by Thriftbooks.com User , 21 years ago
Rudy Giuliani must be a difficult man to write about just for the sheer abundance of anecodotes and controversies he has generated during his years in public office. Kirtzman edits these stories beautifully, however, producing a compelling narrative and, more importantly, a fascinating character study. The success of this book for me was in part a result of that editing; Kirtzman didn't make the mistake of so many modern biographies, giving us minutiae instead of insight. Instead, like a consummate reporter, he distilled a gripping story and a convincing portrait from the jumble of contradictions that is Rudy Giuliani.

emperor of the city.

Published by Thriftbooks.com User , 21 years ago
I was overwhelmed by the author's fairness about a mayor who either was loved or hated but never ignored. Mr. Kirtzman's book provided what has to be considered a fair and objective review of the mayor's positives and negatives. I never felt that the author was taking sides, I never knew where his bias was. Whenever it seemed that he was challenging the accepted wisdom about the mayor he would balance it with another point of view.It revealed that the mayor missed an opportunity to truly be the best when his need for total control limited his ability to be open with the entire city.Read this book, not just once but a second time.

Published by Thriftbooks.com User , 22 years ago
Who would have thought that a television journalist would be such a good writer? Kirtzman tells the story of this fascinating, tortured man like an old pro. It's a dramatic recounting of a moment in time that the author obviously felt the need to describe for the world. I didn't know any of the people he wrote about before I picked up the book, but his descriptions are really vivid, and the drama he builds makes us care about these characters. It's one of the better books I've read this year. Really well done.

Published by Thriftbooks.com User , 22 years ago
In the eighties there was Bonfire of the Vanities. In the year 2000, Rudy Guliani:Emperor of the City, Andrew Kirtzman's equally riveting tale of New York City and its real-life, larger-than-life mayor. A must read for anyone fascinated by the machinations of big-city politics and the impact of powerful personality on a populace.
Trustpilot
Copyright © 2022 Thriftbooks.com Terms of Use | Privacy Policy | Do Not Sell or Share My Personal Information | Accessibility Statement
ThriftBooks® and the ThriftBooks® logo are registered trademarks of Thrift Books Global, LLC