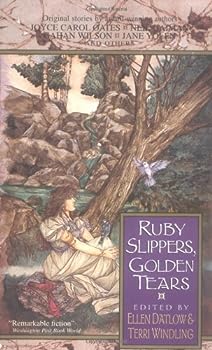 "Once upon a time ..." So begin the classic fairy tales that enthralled and terrified us as children. Now, in their third critically acclaimed collection of original fairy tales for adults, World... This description may be from another edition of this product.

Published by Thriftbooks.com User , 13 years ago
When I was a child, mythology and fairy tales took up a huge portion of my reading time, informing me at a young age that tragedy is but only one of the many inescapable aspects of being alive in this world, and probably the greatest common denominator connecting humans to one another; and that in between our frequent bouts of grief we humans can sometimes experience paradoxical bliss - a truism oft times illustrated in fairy tales. So it was no small joy for me to read RUBY SLIPPERS, GOLDEN TEARS: A Modern Book of Adult Fairytales, edited by the estimable team of Ellen Datlow and Terri Windling, who have a long list of co-edited anthologies behind them as testament to their extraordinary talent for putting together wonderfully entertaining and emotionally provocative stories. Together, Datlow and Windling have edited several excellent volumes of classic fairy tales, interpreted and retold by some of the best story-tellers writing today - with RUBY SLIPPERS, GOLDEN TEARS standing tall as the third volume in their fairytale series. Datlow and Windling write in their introduction to RUBY SLIPPERS, GOLDEN TEARS: Three's the charm. Indeed it is. I cannot remember when I last enjoyed reading an original fantasy anthology as much as I loved reading RUBY SLIPPERS, GOLDEN TEARS, as each consecutive story I read made me shake my head in amazement and mutter to myself that this one must indeed be the best story thus far - until I moved on to the next story, then on to the one after that. The fairy tales are that good, with three of the tales poetic renderings of traditional themes. In fact, if I were to reference the poet Robert Graves I would have to say that the very foundation from which all true poetry originates is the primary constant throughout this book and for me to favor one tale over another would be misleading, since I loved them all. But if pressed I would choose the following: "Summer Wind" by Nancy Kress - a variation on the Briar Rose fairy tale in which the Wyrd Sisters hold together the fabric of creation unseen; "The Death of Koshchei the Deathless" by Gene Wolfe - a clever riff on the Oedipus theme and the eternal dance between creatrix and creation; "The Real Princess" by Susan Palwick - a disturbing tale in which something far worse than the-pea-under-the-mattress determines the balance; "Match Girl" by Anne Bishop - a heart-wrenching tale about sexual abuse and survival; "The Fox Wife" by Ellen Steiber - a visually stunning story about shape-shifting in late nineteenth-century Japan; "The Traveler and the Tale" by Jane Yolen - an SF fairy tale in which visions perceived and myths deliberately sown cross boundaries and shape the future; "The Printer's Daughter" by Delia Sherman - a perfect closing fairy tale for an extraordinary book! Rounding out RUBY SLIPPERS, GOLDEN TEARS, and equally as stunning as the aforementioned stories, are "Ruby Slippers" by Susan Wade - a sardonic riff on the Red Shoes ballet and the Wizard of

the best, so far

Published by Thriftbooks.com User , 18 years ago
I love the whole Windling/Datlow edited series of fairy tale short stories. This particular book is by far the best one I have read (and I've read them all, to date, Jan 2004). Ellen Steiber's "The Fox Wife" is the best short story I've read in awhile - well worth repeated readings, and even led me to seek out more oriental "fox" tales. Joyce Carol Oates, Neil Gaiman, and Jane Yolen are here, and the editors, for this one collection, have abandoned their informal trademark touch of including that one truly odious story. ALL the stories are of high quality, and if you are a devotee of this genre, you MUST read this one. It's really the best of the bunch! Five stars!

Published by Thriftbooks.com User , 21 years ago
All of the books in the Datlow-Windling "adult fairy tales" series are gorgeous but this is my favorite of them all, containing such splendid works as "The Crossing" by Joyce Carol Oates, which is an unusual, evocative recasting of Sleeping Beauty; Delia Sherman's "The Printer's Daughter," which is a highly inventive version of the Russian fairy tale The Snow Child; Neil Gaiman's "The White Road," which is a poetric version of the English Reynardine/Mr. Fox tales; and especially Ellen Steiber's "The Fox Wife," my favorite piece in the book and possibly in the whole anthology series, which is a powerful, beautifully penned version of this classic Japanese folk tale. Unlike the Kirkus reviewer above, I buy these books as much for the informative introductions as for the stories. (My guess is he's objecting to Datlow & Windling's feminist leanings regarding fairy tale history.) For anyone who loves the fairy tale writing of Angela Carter, A.S. Byatta, Emma Donoghue, etc., these anthologies are a MUST.

Published by Thriftbooks.com User , 23 years ago
This is the third volume in editors Ellen Datlow and Terri Windling's series of classic fairy tales that are re-interpreted by some of our best authors. They bring these tales back to their original, unadulterated themes of love, heroism, horror and longing. While all are excellent, some standouts include "Roach in Loafers" by Roberta Lannes, "The Printer's Daughter" by Delia Sherman, and "The White Road" by Neil Gaiman. These tales have many unviersal themes, but in the hands of these very talented writers, they never fail to astonish, delight or awe the reader. If you haven't already saught out the first two volumes of this series (Snow White, Blood, Red and Black Thorn, White Rose) check them out. These are some of the best fantasy fiction colelctions on the market.

Writing as Rich as Rubies, as Dark as Death

Published by Thriftbooks.com User , 23 years ago
"Ruby Slippers, Golden Tears" is the third book in a series of short story volumes edited by Ellen Datlow and Terri Windling, all inspired by classic fairy tales. The genre of fairy tales tends to be seen as literature for children, but Datlow and Windling point out that this is a modern view - the early versions of the tales were often dark, adult and brutal, and they have invited authors to reinvent the tales with an eye on their origins. The resulting stories cover a variety of styles and genres, from the humour of Roberta Lannes' "Roach in Loafers", to the disturbing horror of Anne Bishop's "Match Girl". This is very much an edition for adults, not to be mistaken for children's stories, and Match Girl (based on Hans Christian Andersen's "Little Match Girl") may be too much for some to stomach. Nevertheless, as the author points out, the instruments of torture described have all been invented and used by humankind. Some of my favourite stories in this volume are Joyce Carol Oates' haunting and moving "The Crossing"; Neil Gaiman's poem "The White Road" - "Mr. Fox" with a twist; and Tanith Lee's "The Beast", an unusual and erotic version of "Beauty and the Beast" with more than a touch of "Bluebeard". But the book is full of gems, some fantastical, some darkly disturbing. Lovers of fantasy should lap it up, and anyone who has enjoyed the previous volumes of the series will find more delights in store for them here.
Copyright © 2022 Thriftbooks.com Terms of Use | Privacy Policy | Do Not Sell My Personal Information | Accessibility Statement
ThriftBooks® and the ThriftBooks® logo are registered trademarks of Thrift Books Global, LLC