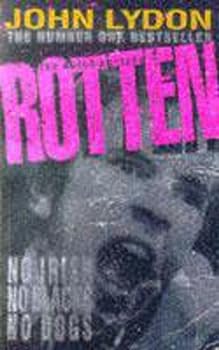 Rotten: No Irish, No Blacks, No Dogs

This description may be from another edition of this product. "I have no time for lies and fantasy, and neither should you. Enjoy or die."--John Lydon Punk has been romanticized and embalmed in various media. It has been portrayed as an English class revolt and...

Published by Thriftbooks.com User , 15 years ago
Punk Royalty King John Lydon/Johnny Rotten's no bollocks account of the fast and furious rise and fall of THE 70's punk group The Sex Pistols. From their beginnings at Malcolm MacLaren's leather shop on King's Road in London to their final concert in San Francisco ... John Lydon/Johnny Rotten ... says it like it is ... and you don't get the feeling you have been cheated.

Rotten: No Irish, No Blacks, No Dogs

Published by Thriftbooks.com User , 16 years ago
This book is a brilliant read for anyone interested in the REAL story of the Sex Pistols. Written by John Lydon ( Rotten )it is an honest look inside a place in history that has suffered much due to the fantasies of many people hoping to latch on to a peice of its legend. Being a huge Pistols fan this book is very close to my heart as I feel it takes you about as close to being there as humble fan could ever hope to be. Thank god for Lydon and the Pistols eh?!

The Pistols seen through the piercing stare of Johnny Rotten

Published by Thriftbooks.com User , 16 years ago
The constant criticism of this book is what is perceived as Rottens one sided ego about the events that created the Sex Pistols and the movement that would become punk in mid 70's England. What these critics fail to realize is that the book is from his point of view which he has had to become very defiant over due to all of the mis-information that has been reported over the years. This book represents his chance to set the facts straight and you can feel the underlying frustration that obviously drove him to write this book as you read the pages. Rotten explains in plain facts the atmosphere in England in the Mid 70's and the conditions that would combust into what the press would end up dubbing "punk rock". Reading this book allows outsiders to really understand what was going on beyond the masses of mohawks and leather jackets that would later cast the movement in a generic style void of it's original creativity. The book is hard to put down and provides a ton of laughs to go along with the vivid picture of life for the young working class Brits frustrated with a system too willing to wallow in drudgery and maintain status quo. Many at the time thought that Rotten was trying to insight anarchy when he was only trying wake the sleeping masses up to come alive and create change for the better in a time when England needed it most. A great companion with this book is the documentary "The Filth and the Fury".

Published by Thriftbooks.com User , 20 years ago
You don't have to be a SEX PISTOLS fan to enjoy this book. If you remember the 'uproar' punk rock caused in 1977-1979, this is for you !John Rotten is such a breath of fresh air, compaired to all the other rock stars of the past. He is witty, downright RUDE at times, and a 'kid at heart'. Basically, this book talks about him growing up in the working class part of London and what started the whole punk rock scene. He takes us from Kings Row to the recording studio to Buckingham Palace to small club gigs and then to America, to wrap up the ENTIRE Sex Pistols' career. It's all here: Sid's battle with heroin, Johnny's feuding with manager Malcome McLaren, Steve Jones (guitarist) & Paul Cook (drummer) remeberences of what it was like to be a Pistol, the battles with Sid's girlfriend Nancy and the trouble she caused, Johnny's court battle with Pistols management after the breakup of the band, ect. ect....If you EVER had an interest in the Pistols, you will LOVE this book. ALL questions are answered and put to rest. If you always HATED the Pistols, I suggest reading John's book ANYWAY because it will make you think again about the 'tallent' this band had. They changed the face of music...Without THEM, there would have been NO indie rock - NO alternative rock - and NO 'new wave' rock. They were WAY before their time.John's book is honest and down to earth...He admits his mistakes...He admits his faults...He admits the Pistols had little or no tallent as a touring band...This is a man everyone always thought of has having an EGO problem. Read this book ! He could very well be the most CARING person in the rock industry...You might not always agree with WHAT he says, but he will make you THINK....And THAT is a sign of a true artist !
Copyright © 2020 Thriftbooks.com Terms of Use | Privacy Policy | Do Not Sell My Personal Information | Accessibility Statement
ThriftBooks® and the ThriftBooks® logo are registered trademarks of Thrift Books Global, LLC