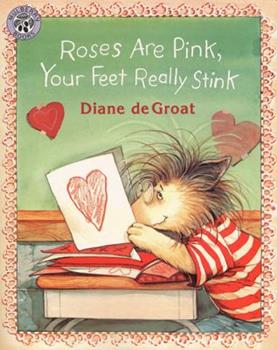 (Part of the Gilbert and Friends Series)

This Valentine's Day favorite read-aloud will prompt lots of giggles, as well as discussions on kindness and forgiveness. Gilbert is all set to write fifteen friendly valentine cards to his classmates. But how can he write a nice poem for the boy who tweaked his nose, or the girl who made fun of his glasses? Instead, Gilbert writes two not-so-nice valentines...and signs the wrong name on both When his classmates read his poems, their feelings are...

Published by Thriftbooks.com User , 13 years ago
I have bought many, many books for my girls (now aged 8 1/2 and 6) over the years. They both loooove this one and so do I. Adorable illustrations (and I'm a graphic designer who hires illustrators) and great story about a little boy that does something 'bad' but recovers well. Great lesson!

Published by Thriftbooks.com User , 14 years ago
Our 4 yr old daughter loves this book. She has requested this book every night for the past two weeks. The illustrations keep her attention while the story teaches lessons at her level of understanding. We look forward to more books from this series.

Valentine's Day with a Message

Published by Thriftbooks.com User , 20 years ago
Gilbert has a real dilemma. He's writing poems on his Valentine cards, for his classmates, but doesn't want to write something nice to Lewis and Margaret. Lewis tweaked his nose and made it red and Margaret said mean things about him in front of the class. So he decides to write each an unkind poem and instead of signing his own name, since he's afraid they'll be angry, he signs Lewis's name to Margaret's card and Margaret's name to Lewis's Valentine. It doesn't take long before Margaret and Lewis figure out who really gave them these mean cards and they, along with the rest of the class won't have anything to do with Gilbert. First he has to eat lunch all alone, no one will sit with him and at then at recess, no one will play with him. As soon as he gets back to class, Gilbert gets to work making new cards for Lewis and Margaret and apologizing for his unkindness. As the class party begins all is forgiven and Lewis, Margaret and Gilbert are friends again..... Diane De Groat has written a simple, charming story with a powerful message about the importance of second chances, that youngsters 4-8 will easily understand. Her gentle text and wonderful watercolor illustrations really capture the small hurts and slights kids experience and her positive, uplifting ending and sensible solution should open good discussions at home and at school.

A good story to teach about other's feelings

Published by Thriftbooks.com User , 21 years ago
I really enjoyed this book. It shows how sometimes getting even may not be the best solution. Sometimes children don't realize how what they do can affect others. In this story, Gilbert learns this lesson the hard way. He sends two not-so-nice valentines to two of his classmates who had done something ugly to him. Instead of making him feel better, he ends up feeling awful. His classmates didn't want to be friends with someone who would say mean things about others. He swallows his pride and makes new valentines to apologize for the way he acted. This book is a good way to integrate character education in elementary school. It has a serious message but does not come across too strong.

Published by Thriftbooks.com User , 23 years ago
Make yours good from the start. Kids will love the funny (and sometimes not so nice) rhymes. The watercolors are charming and the message is good. Gilbert discovers that what appears to be meanness is often just a misunderstanding. He also learns that two wrongs don't make a right. The author conveys these "feel good" messages without being too heavy handed. This is a great book to read with your children before they embark on writing their own valentines.
Copyright © 2020 Thriftbooks.com Terms of Use | Privacy Policy | Do Not Sell My Personal Information | Accessibility Statement
ThriftBooks® and the ThriftBooks® logo are registered trademarks of Thrift Books Global, LLC