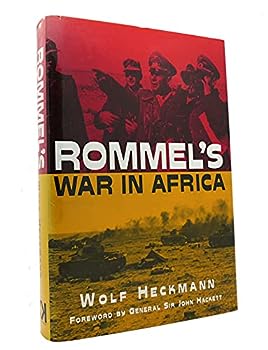 Rommel's War In Africa is a vivid and detailed account of the fighting between the German Afrika Korps and the British 8th Army during WWII. It details the war itself and the man behind the battles,... This description may be from another edition of this product.

Published by Thriftbooks.com User , 15 years ago
Wolf Heckmann's "Rommel's War In African" (1981 translation from the original German) is a masterpiece. It tells the complex story World War II in North Africa from the German (not necessarily Nazi) point of view. This hardback version's 353 pages is divided into 3 books (about Erwin Rommel's 1941 posting to the Afrika Korp., his 1941-42 Nile campaign, and the 1942 advance on and withdrawal, before Montgomery's attacking British army, from El Alamein). Because Berlin recalled Rommel to build "Fortress Europe" before the N. African war's end, no information is provided about Kasserine Pass. Although the text is somewhat technical (possibly due to its translation into English) it is readable. Following Heckmann's chain of events is often a challenge. The book has extensive maps (unfortunately untitled) for following the flow of campaigns and battles. Although he does not like the Field Marshall, Heckmann showcases Rommel's tactical brilliance (his Clausewitz-style of military leadership) and foibles (i.e. the General often disregarded personal/staff safety before the enemy). The author provides many soldierly antecdotes. These are entertaining, and enlightening, as they bring color to the N. African spectacle of 1941-42. More biographical information for the great German Field Marshal would have made this book better. The few pages (pp. 25-27) which speak to Rommel's life are not exhaustive and barely informative. A discussion of Rommel's pre-African days would have only enhanced this narrative. Photographs would have, also, made a significant difference for Heckmann's presentation. This book is recommendable to WWII buffs, military enthusiasts, and battle strategists. If you like military history you will find Heckmann to be a real page-turner. His is Rommel's African war revealed.

A good take on Rommel's actions in Africa

Published by Thriftbooks.com User , 17 years ago
This is an interesting book mostly because of the viewpoint of the author. The author is a German who does not think Rommel was all that great. And so you have the whole series of events in Africa viewed from a critical German perspective. And as he says, Rommel was very lucky in who he had as opponents. The British were horribly led in the begining (with some notable exceptions) leading to numerous German victories. This is not a "must read." But it is worth the time and the unique viewpoint of the author makes it quite informative.

a great book on Rommel and WWII

Published by Thriftbooks.com User , 17 years ago
Rommel's War in Africa is a vivid and detailed account of the fighting between the German Afrika Korps and the British 8th Army during WWII. It is really a book with two themes, one about the war itself and the other about the man behind the battles, Erwin Rommel. The writing is solidly based on accurate historical research, using interviews and archival material from both sides. It was originally written in German and then translated into "British" English, so there words here and there that surprise the American reader, e.g. Germans referring to each other as "chaps". However, this does not take away from the reader's experience at all. Heckmann was one of the first authors to step beyond the glorified myth of Rommel and consider the man as he actually was. Both his courage and ingenuity, and his vanity and miscalculations are thoroughly explored. The narrative covers the back-and-forth nature of the fighting as each side maneuvers through the desert, suffers setbacks, and deals with the challenges of supply on a remote front. In the end, Rommel is defeated in Africa, and Germany itself reaches a turning point in the war. I recommend this book to anyone who is interested in this theater of WWII.

Published by Thriftbooks.com User , 19 years ago
I have read quite a few works on the North African campaign of World War II, and Wolf Heckmann's "Rommel's War in Africa" is one of the best. This well written book is a pleasure to read for both the casual enthusiast and a more researched reader. Heckmann thoroughly and honestly explores both sides of the war, from both the allied and axis sides, which is quite refreshing, as most works are very Anglo-orientated about North Africa. I would confidently recommend this book to anyone looking to learn more about World War II.

The best book on the subject for the german side

Published by Thriftbooks.com User , 21 years ago
The author uses sources and personal accounts from both sides to give the most balanced account of this interesting campaign I have ever encountered. One of the very few books on the subject to take an unbiased look at Rommel's generalship, recounting both his genius and his flaws. I cannot overemphasize how worthwhile I found this work.
Copyright © 2022 Thriftbooks.com Terms of Use | Privacy Policy | Do Not Sell My Personal Information | Accessibility Statement
ThriftBooks® and the ThriftBooks® logo are registered trademarks of Thrift Books Global, LLC