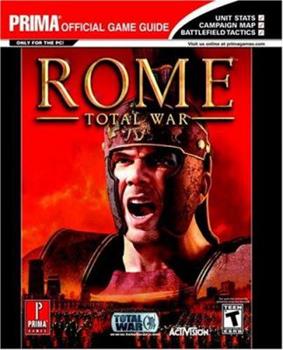 A Review from a long time Total War Series player

Published by Thriftbooks.com User , 16 years ago
First of all I'd like to point out that most people who play this game and give it poor reviews do not have enough patiences or common sense required to play a game like this. For Example, as another reviewer stated, "The back cover of the book says "Fully Detailed Campaign Map". Try and find it in the book! What they meant by this was they threw a 7 x 4.5 inch black and white picture of the campaign map on the last page!! The image has terrible contrast and it's black and white and really small. You cant even make out city names that's how bad it is. Considering the game comes with a 1 1/2 foot by 1 foot fold out color map what the heck good is this? More than that the total war website has a province profile in flash that is FREE." Very good, the back says that there is a "Fully Detailed Campaign Map".... IN THE GAME!!! it means that the campaign map in the game is fully detailed. The campaigns are awesome in general but that is a different subject altogether. I'd like to make the point that never in these types of strategy games or in the Total War series did I require a game guide, I have never bought one for any game as a matter of fact. These types of games simply require common sense and a slight historical knowledge. Ok, while this game may be immense in the hard drive space that it requires it more than delivers as an incredible RTS game. The graphics and displays are beautiful as you march grand armies of Greek Hoplites, Roman Chariots, Egyptian archers, and War Elephants across incredibly detailed and vast maps. In addition each and every solider in your army is fully and individually controlled by the computer. In other words, there is no mass control as in other games, (Medieval: Total War for example), an entire unit acts as one and in Rome: Total War there is as individual "personality" to each individual of your troops. The graphics are also incredible and yes they do require much of your computers capabilities, so I'd like to address the issue of technical issues. If you are not prepared to stop downloading pornography or music while you play then do not buy the game. This game can be incredible but only if you take an hour or so (if your like me and need to take breaks cause of attention span issues) to just use your computer for this game. I'll admit that multiple times I have been sucked into the game only to end up playing for hours and neglecting many other tasks that required my attention. Another credit to this game is the historical accuracy of the in game units. All of the units are taken directly from the historical libraries of the world and are fairly incredible to look at. (there is some embelishment in some of the units.) If you are worried about not enjoying the game head over to the Total War website and download the demo. www.totalwar.com This game has won many awards: Best in its class 2004 E3 2004, Best Strategy Game 2004 from Gamespot Reviews: IGN: 94% "...Rome: Total War is without a doubt one of th
Copyright © 2020 Thriftbooks.com Terms of Use | Privacy Policy | Do Not Sell My Personal Information | Accessibility Statement
ThriftBooks® and the ThriftBooks® logo are registered trademarks of Thrift Books Global, LLC