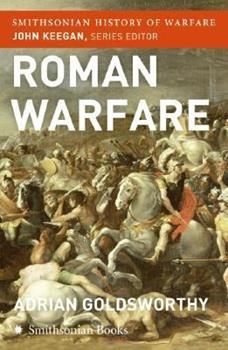 (Part of the Cassell History of Warfare Series)

The Roman Army was the most advanced professional fighting force the world had ever seen. What distinguished the Roman Army from its opponents was the uncompromising, total destruction of its enemies. The Romans' ruthless approach to warfare eventually created an empire that included much of Europe, the Near East, and North Africa. This authoritative history narrates the dramatic rise and fall of the Roman Empire, a journey author Adrian Goldsworthy...

Published by Thriftbooks.com User , 15 years ago
Adrian Goldsworthy's short guide, Roman Warfare, is easily the best book of its length that I have read. If you're looking for a concise yet detailed survey of Roman military history, this is the book to buy. Goldsworthy cuts the fat from the subject, stripping away the mundane details that typically bog down the casual reader or armchair historian. He charts the development of the Roman army from its earliest forms through the end of the empire, relying on impeccable research and a very clear style. He clears up a lot of confusing ideas (such as the composition of the republican-era triplex acies formation) and, unusual for an historian dealing with figures like Caesar, Scipio, and Hannibal, he never indulges in hero-worship (something which, sadly, cannot be said of the otherwise excellent historians Theodore Dodge and B.H. Liddell-Hart). Another thing that makes this book worthwhile is the copious amount of maps and illustrations, all of which support the text in a clear and easy to understand manner. If you enjoy this book and would like something a bit deeper, I'd also recommend Goldsworthy's The Fall of Carthage, a very good history of the three Punic Wars. Roman Warfare is highly recommended reading for anyone new to Roman military history or history in general.

Published by Thriftbooks.com User , 15 years ago
Roman Warfare by Adrian Goldsworthy is a very detailed book. Starting with the founding of Rome, the conquest of Italy and the early Republic, the author gives us a great foundation for the rest of the book. We get a very complete chronology and each chapter gives us the major points of the military history of Rome, from equipment, to tactics, to where they got their recruits, to how they treated their enemies. By the time we get to the collapse of the Roman Empire in the West and the recovery, for a short period, in the East we learn that the Roman Army, if given the men and funding, was always victorious in the end. The Army did not fail the Empire, the Empire failed the Army. With a glossary on terms, appendices with lots of information and great maps detailing some of the important battles and wars, this is a great book for its size. A must for any library on Roman history or military history.

Published by Thriftbooks.com User , 18 years ago
I am not an expert on Roman Warfare by any stretch, and bought this book to fill a gap in my own knowledge. It certainly suceeded, and admirably so for a book of its smaller size.As is noted below, the topic of Roman warfare is vast, and is alos worth considering that a lot of the specialist knowledge is buried in specialist academic works, and generally inacessable to the general reader, and unable to act as a general introduction. This work serves as an excellent introduction to the topic, by placing the history of the Roman army in context , and relating that to the evolution of tactics and weapons, and relating that to the social and political developments in the Roman empire. It is well illustrated with photographs of surving materials, and even more impressivly, diagrams of key battles. The latter were most enlightening.All in all I was highly impressed with the book. It is not deep by any stretch, but for the novice, you will do no wrong. I am not an expert, but I dont think a person with greater than passing knowledge will learn much from this. Grade: B+

Great Intro and Overview of the Roman Art of War

Published by Thriftbooks.com User , 21 years ago
This book is not the definitive history of Rome's wars, but a well-constructed survey of how it prepared, equipped, manned and made war, using selected illustrative examples from each stage of development over the thousand-year period.Goldsworthy sets his task as tracing the development of warfare within the context of the evolution of the army and state: the nature of the army, why and with what objectives if fought a war, and the way in which it operated, taking into consideration the military institutions of the main enemies in each era. Matters such as arms,armor and equipment are handled succinctly by use of drawings and diagrams, which are especially good at depicting battle tactics for the major encounters. The positions of troops are shown as if from an aerial view rather than the bare schematic bars and squares usually shown.Despite being touted as a general, introductory text, there is plenty to keep the knowledgeable reader interested as well. I found new insights in every chapter, which follow a chronological rather than topical arrangement.Being pitched at the general reader, as is required by Cassell's _History of Warfare_ series, the book is heavily illustrated. This has its good and bad features. Mostly, the illustration are taken from columns, gravemarkers, monuments and ruins of forts. They are usually provided with detailed captions to explain the significance of the features shown therein. My only complaint is that some of the pictures occupy a full-page or two-page spread where a smaller image would have sufficed. I expect this is due to the publisher's required text-to-illustration ratio.Here is an example of Goldsworthy's exposition, taken from his section on Caesar in Gaul. After a brief excerpt from Julius Caesar's _Bellum Gallicum_, describing the battle at Sambre in 57 BC, Goldsworthy remarks:"It is worth noting that Caesar, although he had moved into the front line, does not bother to tell us whether or not he actuallt fought hand-to-hand. What he does stress is that he exposed himself to danger in order more effectively to do his job of encouraging the battle line. The general's job was to lead and control his army, not inspire them with his personal prowess, like the warrior aristocrats of early Rome or Alexander the Great who consciously emulated the behavior of Homeric heroes."The book is filled with such helpful commentary.Every epoch (including that of Marcus Aurelius and Commodus, of _Gladiator_ fame) is depicted, showing how the financial and political policies of the emperors and senate affected the abilities of the armies to do what was expected.A detailed chronology, a glossary that actually explains rather than merely annotates terms, a brief review of the ancient sources for each chapter, mini biographies of each of the luminaries, and a well thought out reading list for each chapter all add to the books usefulness.Highly recommended both as a "first book" for novice

Published by Thriftbooks.com User , 21 years ago
The field of Roman warfare is an area of interest that has attracted widespread fascination from the time of the Roman Caesars themselves. Many of the surviving representations of Roman art, such as the Arch of Titus and the Column of Trajan, show us Roman legionaries like those commanded by General Maximus (Russel Crowe) in the new Ridley Scott/Dreamworks' epic "Gladiator!" Adrian Goldsworthy's superb book Roman Warfare could not come at a better time, since the field of historical reenactment of the time of the Roman legions is more popular than ever. In England, where the outdoor battle scenes of the "Gladiator" movie were filmed, reenactment groups like the Ermine Street Guard have raised the art of historical reenactment to true perfection. Many of the extras in the movie "Gladiator" probably came from these British reenactment groups! Coming out now from Cassell, a British publishing house with a firm reputation in military publishing, Adrian Goldsworthy's Roman Warfare is a welcome addition to the growing field of Roman military history. With the new information continually coming to light about the brave Roman legions from archaeologic excavations at historical sites in England and in Europe, Goldsworthy's book is an essential addition to the book shelf of anyone interested in the Roman legions which wrote so much of European history. Roman Warfare clearly focuses on all the aspects of the Roman war machine, which for centuries ruled the battle fields from Hadrian's Wall in England to the frontier of the Danube River and the deserts of the Middle East and North Africa. Close attention is paid to the many campaigns of the Roman Army--featuring great generals like Julius Caesar--as well as to a clear explanation of the organization of the army which made the legions of Rome supreme against any adversaries. Joining a clear text with well-chosen illustrations, a combined operation of real sophistication, the book is a welcome find for any scholar and a fine introduction to anyone inspired by the "Gladiator" movie to learn more about the soldiers of General Maximus. Goldsworthy's book comes packed with much information that will lead to rewarding further study of this exciting subject. As the Roman legionaries would say themselves, "Ave Caesar!" "Hail Caesar!"
Copyright © 2020 Thriftbooks.com Terms of Use | Privacy Policy | Do Not Sell My Personal Information | Accessibility Statement
ThriftBooks® and the ThriftBooks® logo are registered trademarks of Thrift Books Global, LLC