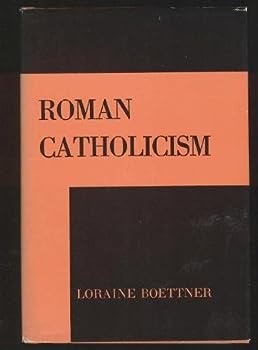 Since its publication in 1962 this informative volume has established itself as a classic treatment of traditional Roman Catholicism.

Published by Thriftbooks.com User , 12 years ago
This work is truly a masterpiece! It is a classic that is full of facts. Not all the reviewers like this work, the truth hurts.

Published by Thriftbooks.com User , 13 years ago
Of course Roman Catholics aren't going to like this book or give it good reviews while at the same time praising authors like Karl Keating who will scratch their itching ears by telling them what they want to hear. The book has been accused of having no documentation to support it's claims, however, the documentation is clearly included right in the text of the work and those sources are clearly Roman Catholic. Clearly people who are claiming this work is unscholarly and ignorant haven't actually read the book themselves. The fact is, Boettner has written a work exposing the RCC for what it really is by citing it's own writings and history and in response he has been slandered and ridiculed unmercilessly by people who claim to be Christians. All for quoting back to them what their own writers and history have recorded. Even going so far as to claim because Boettner wasn't around for Vatican II he must be in error. Nothing changed with Vatican II (or it shouldn't have if the RCC is as unchanging as it's adherents like to claim, or did we get a new and different RCC with Vatican II, in which case it's not the same church as the original and would be in contradiction to the original teachings, making it apostate). In any case, give the man his due (though I disagree with his Reformed position myself) and recognize his work for the excellent documentation and him for the scholar that he was.

Published by Thriftbooks.com User , 13 years ago
After reading in-depth treatments on anti-Catholicism wherein this book never gets mentioned such as in Robert N. Bellah's Uncivil Religion: Interreligious Hostility in America (with the second section--pages 39-109--titled "Protestant-Catholic Tensions"), wherein this book is briefly but respectfully mentioned such as in Philip Jenkin's The New Anti-Catholicism: The Last Acceptable Prejudice (page 44, states "respected Presbyterian scholar Lorraine Boettner published the first of many editions of a comprehensive polemic against the Catholic Church"), wherein this book gets credited as a conservative perspective such as in Revolution in Rome (page 19, "the truth is, Boettner notwithstanding, that both the spirit and the doctrine of Catholicism are changing"), one can conclude that un-biased scholars see this work as an important polemic worthy of attention and consideration. Now giving this work some attention: if the Catholic Church is truly changing in spirit and doctrine, it is certainly surprising and unexpected to find the Roman-Catholic Ignatus Press publishing the sort of scholarly myopic attacks on Boettner's book that exist in Catholicism and Fundamentalism: The Attack on "Romanism" by "Bible Christians".

READ IT FOR YOURSELF! (What ese is there to say?)

Published by Thriftbooks.com User , 22 years ago
Ah, what a book! You know, I think it's actually angered MORE religios than Rushdie's SATANIC VERSES! With a rep like that, you owe it to yourself to give it a read. And I mean READ it-- don't let anyone make up your mind for you. (You see from this page how many folk are willing to do just that!)The most frequent objections I have seen to this book are: 1) it is full of bitter falsehood, and 2) It is embarrassingly UN-scholarly. I believe the folks who say this are banking on your NOT bothering to read it. Disappoint them!As far as these allegations go, they are well refuted by Robert Zins in his booklet FORMIDABLE TRUTH (available from White Horse Publications.)Dr. Boettner's book is a classic. It is also remarkable how little actual bitterness or mean spiritedness you will find here.One reviewer says to disregard it and read THE CATECHISM OF THE CATHOLIC CHURCH instead. My challenge is that you read BOTH and compare! "...the truth shall make you free."
Trustpilot
Copyright © 2022 Thriftbooks.com Terms of Use | Privacy Policy | Do Not Sell or Share My Personal Information | Accessibility Statement
ThriftBooks® and the ThriftBooks® logo are registered trademarks of Thrift Books Global, LLC