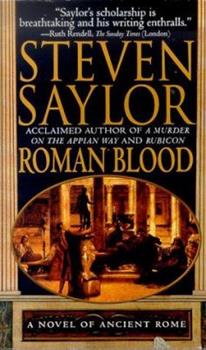 Elena asks that you come to the House of Swans at once . . . Compelled by this message, the wealthy, sybaritic Sextus Roscius goes not to his harlot, but to his doomsavagely murdered by unknown assassins. In the unseasonable heat of a spring morning in 80 B.C., Gordianus the Finder is summoned to the house of Cicero, a young advocate staking his reputation on this case. The charge is patricide; the motive, a son's greed. The punishment, rooted deep...

Step back in time to mean streets of ancient Rome....

Published by Thriftbooks.com User , 16 years ago
and join Gordianus the Finder as he hunts through those twisting, winding streets to aid Cicero (yes, that Cicero). Set in 80 BC, during the dictatorship of Sulla, Gordianus is hired by a young orator named Cicero to investigate a case, Sextus Roscius, a gentleman farmer, is accused of the murder of his father. Gordianus is soon plunged into the not so glamorous side of ancient Rome, a Rome of hired killers, corrupt government, brothels and home invasions. A world where a dying man's screams only cause good citizens to cover their ears and hide behind their barred doors. The clues to the mystery of this novel are all there for the reader to follow but twist and turn so that it would be a challenge to solve the crime before Gordianus. The real treat to this story is not the mystery, although it is engaging, but rather the glimpse into the ancient world. Even though Gordianus has many of the same concerns of a modern day citizen, (crime in the streets, corruption in government, stretching the income to cover expenses) but he is very much a man of his times. Gordianus must contend with the social niceties of how a free citizen should treat a slave, his own and those belonging to others, finding his way through a city that has no maps, nor even any names on most of the streets, streets where a citizen could be killed at any time by a common thief, in a vendetta with a rival family or even at the request of the government. Saylor's descriptions of the settings and characters are fascinating, they bring this long gone time a place alive in an interesting and entertaining manner. This is the first of the ROMA SUB ROSA series, and I cannot wait to get my hands on the next in the series.

Published by Thriftbooks.com User , 19 years ago
As always in the case of a (good) historical novel, this is a story about a modern character in pseudo-Ancient grab peeeping at an alien reality and judging it on his own terms. The interest of the story therefore depends on the modern character being intersting enough. Fact is, Gordianus the Finder is a very interesting character, the knowledge of Roman History displayed by the author accurate, and there are vignettes in this book I wouldn't wish to miss (for instance, the account of Gordianus' travel to Ameria). An enormously interesting book, deserves to be read both as a mystery and as a historical novel.

Its not pretty, its not hi-tech, its Republican Rome!

Published by Thriftbooks.com User , 19 years ago
How very ironic that the week after my students I am discussed and read Cicero's letters to his slave, Tiro, that I should get this book. I read it quickly and enjoyed every minute of it. While I might argue on some historical points, the speculations about society in Rome in 80 BCE are well done and played out with depth and personality. I suggested it to my students today on our last class as a good example of popular history also being well-done history. Saylor does an outstanding job in this entire series, it seems now having read a second book in it, of protraying slavery as a realistic institution.

Published by Thriftbooks.com User , 23 years ago
Steven Saylor's Roma Sub Rosa series is wonderful for the exploration of character, for the mysteries (of course), and for bringing Ancient Rome to life. The descriptions of Rome made me feel like I was walking through a city teeming with life, people, sights, sounds, smells. The novels seem to become more complex as the series goes on. Roman Blood, the first novel in the series, is the most straight-forward murder mystery. Arms of Nemesis puts Gordianus under pressure with a time limit, and looks at the way slaves fit into Roman society. Catalina's Riddle takes place on a farm, in the midst of a possible revolution. The Venus Throw involves, scandal, politics and an examination of morals. I haven't read the other books yet, but I have ordered them. I heartily recommend this series.

Published by Thriftbooks.com User , 25 years ago
I first began reading Steven Saylor's short stories in Ellery Queen and was immediately taken with his writing. Saylor brings history to life in an immediate and vivid manner. He does it so well, the reader doesn't notice it after awhile. "Roman Blood" is first and foremost a mystery, and the "detective" is Gordinius the Finder, a Roman citizen who is often hired to find truth. In this story a man is accused of murdering his father, and faces a horrible punishment if Gordinius and Cicero cannot find him innocent. Saylor exposes the corruption of the Roman political system while asking pointed questions about what justice is. This novel is so far my favorite of Saylor's novels because although he delves into the politics of the Roman Forum, the book is foremost a mystery novel. Gordinius is attempting to solve the murder of a Roman citizen, and Saylor maintains the suspensefulness throughout the novel. The book's ending leaves the readers surprised and thoughtful. Saylor also, by the end of the book, has ensured his future royalties because he's made you care about the characters and leaves you wanting to read more about their lives and their challenges.
Copyright © 2020 Thriftbooks.com Terms of Use | Privacy Policy | Do Not Sell My Personal Information | Accessibility Statement
ThriftBooks® and the ThriftBooks® logo are registered trademarks of Thrift Books Global, LLC