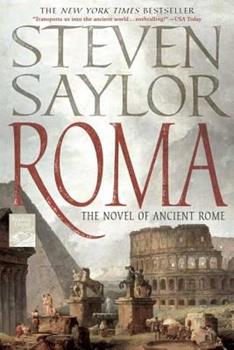 Roma: A Novel of Ancient Rome

Spanning a thousand years, and following the shifting fortunes of two families though the ages, this is the epic saga of Rome, the city and its people. Weaving history, legend, and new archaeological discoveries into a spellbinding narrative, critically acclaimed novelist Steven Saylor gives new life to the drama of the city's first thousand years -- from the founding of the city by the ill-fated twins Romulus and Remus, through Rome's astonishing...

Roman History at its best!!!

Published by Frances Mathews , 5 months ago
ROMA is the most informative novel on Roman history I've ever read. I do not care for pure history but Saylor has captured history through his characters. It's a wonderful read. Will use it as source for future reading when encountering historic figures in other books.

A fascinating journey through the history of Rome

Published by Thriftbooks.com User , 14 years ago
- This review first appeared in the August 2007 issue of the Historical Novels Review (http://www.historicalnovelsociety.org)- Steven Saylor, the award-winning mystery writer of the Roma Sub Rosa series, undertakes the multigenerational historical saga in his latest novel ROMA. Pioneered by the late James Michener and current purview of novelist Edward Rutherford, Saylor's entry into the genre is a noteworthy one. With his meticulous knowledge of ancient Rome, the subject matter seems a perfect match for someone of his impressive talent---a centuries-long journey from the founding of Rome to the rise and fall of the Republic and the assassination of Julius Caesar. Saylor frames his compelling, fast-moving narrative in elegant prose, using the device of a fictional family whose fates are closely interwoven with the vicissitudes and fortunes of the city. The cast is large and varied, beginning with a salt trader's daughter in 1000 BC who receives a mysterious gold talisman that will become a family heirloom. Through the eyes of her descendants, the Potitius family, we witness the city's founding by Romulus and Remus, the struggles and intrigues of plebeians and patricians, Hannibal's invasion, a mass murderer's scheme to wipe out a competing dynasty, a vestal virgin's sacrifice, and the tragic attempt of two sibling politicians to revolutionize Roman society. Throughout we are regaled with the aspirations, delusions, brutal expediencies and hunger for immortality that permeated the struggle to build what arguably became history's most powerful empire. Readers seeking a central character to identify with may be thwarted by the swift passage of years and events; those who persist will find themselves in awe of Saylor's command of his sprawling storyline, his penchant for detail, as well as his evident passion for what is truly his book's only central character--Rome herself, a city whose complex grandeur and enigmatic allure continue to entice our collective imagination.

Published by Thriftbooks.com User , 14 years ago
Epic in scope and intimate in story telling, ROMA is one of the finest works I've read by Steven Saylor. I've had the pleasure of reading his entire Sub-Rosa series and have found that experience very rewarding. ROMA is a story, not of a single man, but rather of the rise of the Roman Empire as viewed through the eyes of many generations of a patrician family. The common thread, besides blood line, is an amulet. To explore the meaning of same, would be to steal some of the thunder of ROMA's story. Suffice it to say that if you enjoy well researched historic novels about Ancient Rome, then you have found one of the best!! Saylor's work is magnificent.

Published by Thriftbooks.com User , 14 years ago
Steven Saylor has written a fascinating novel spanning Roman history from its earliest beginnings until the beginning of Christianity. Other authors, notably James Michener and Edward Rutherford, have used this device previously. Saylor, however, does it best. This book is a page turner. I couldn't put it down.

Published by Thriftbooks.com User , 14 years ago
The thing that shocks most modern tourists visiting the site of Pompeii is the ubiquitous winged phallus that adorns almost everything in the city. To the modern sensibility this is something obscene, but to the Romans it was a holy icon representing the generative quality of life itself. This winged phallus plays a central role in Steven Saylor's fabulous new novel, ROMA. This image in the form of a gold amulet passed from generation to generation is the thread that unites the many episodes of this book. (The conclusion that Saylor draws about this icon at the end of the novel is provocative indeed!) ROMA traces the history of Rome from its beginnings as a trading post on the prehistoric salt trail to its peak as the undisputed master of the world during the reign of the emperor Augustus. Although Saylor is one of today's most prominent historians, ROMA is certainly no dry historical treatise. It's a rip-roaring adventure story with lots of suspense and sex and violence. Some of the episodes are horror stories and others are incredibly moving love stories of different kinds of forbidden love. In his afterword, Saylor states that his major inspiration was the work of the Roman historian known as Livy. Livy also inspired Shakespeare, who took the stories of CORIOLANUS and THE RAPE OF LUCRECE from his histories. The stories of Coriolanus and Lucretia are also included in ROMA. I tried reading Livy about 25 years ago and found it rough going, but after reading ROMA, I'd like to give it another try. In fact, I wish this book had been around before I read Shakespeare's JULIUS CAESAR and CORIOLANUS. This book adds so much depth of understanding to both those works. For instance, the opening scene of JULIUS CAESAR takes place at the Roman festival of the Lupercalia, in which naked athletes compete in a race through Rome. ROMA explains the origins of the Lupercalia (it started with Romulus and Remus), so that the modern reader can understand why it's important that Caesar's wife gets touched by the runners. ROMA also clarifies the relationships between all the other characters in JULIUS CAESAR. (Cassius and Brutus were brothers-in-law!) Even though there's a LOT of sex in the book (none of it very graphic), I'm giving it to my teenage nephew so that he can read it before his class studies JULIUS CAESAR. As with all of Saylor's work that takes place in Ancient Rome, ROMA is alive with the details of daily life in Rome that give the book a depth and texture that few authors writing today can rival. One of the more interesting aspects of the book for me is the thread that traces the development of the Roman religion. The religion is officially founded when cousins Potitius and Pinarius (friends of Romulus and Remus) erect the first altar to Hercules (in gratitude for killing the cannibal giant Cacus who menaced their hillside hamlet). They learn to read omens and begin a long line of priests who can predict the outcome of an enterpris

It Just Does Not Get Better Than This!!

Published by Thriftbooks.com User , 14 years ago
Steven Saylor's fascination with Ancient Rome began in childhood. A history graduate and former newspaper and magazine editor, he lives in Berkeley, California and has a huge number of fans of the Sub Rosa series he has written featuring Gordianus the Finder. For avid readers of Saylor's books, this one will be well worth waiting for, although those who are expecting it to be another Gordianus the Finder mystery novel may be a little disappointed as the author has discarded with the Finder's services for this volume. In Steven`s own words he says "This book marks a departure from my Roma Sub Rosa series. I wanted to try my hand at a truly epic novel, and to explore the remarkable ten centuries that came before the time of Gladiator, HBO's Rome, and my own books. This is the story of how the Romans created the greatest city on earth -- the story of how Rome became Rome. The book takes in a thousand years, and follows the changes in fortune of two families through the ages. This is a beautifully written book about the city of Rome and its people. It reminds me very much of Sarum by Edward Rutherford, one of my all time favourite novels. Roma brings to life the first thousand years of a city that is arguably the most famous in all of history. From its founding by the twins Romulus and Remus through to the city becoming the focal point of the most powerful empire of all time. Everything is there, the book recounts the capture of the city by the Gauls, the invasion of Hannibal. Bitter struggles between patricians and plebeians. The strength and weaknesses of the senate and the ultimate demise of Rome's republic with the assassination of Julius Caesar.
Copyright © 2020 Thriftbooks.com Terms of Use | Privacy Policy | Do Not Sell My Personal Information | Accessibility Statement
ThriftBooks® and the ThriftBooks® logo are registered trademarks of Thrift Books Global, LLC