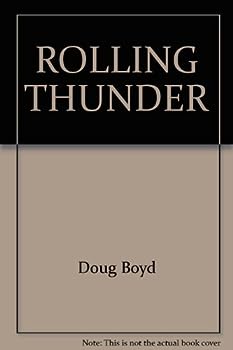 To the victor in the skies... Jet aviation began as a dynamic, if underutilized, part of a desperate race between Hitler's scientists and the Allies.??Today it is an indispensable component of warfare: space-age machines, incredibly skilled pilots, and weaponry that thinks for itself.??Today's top guns strap themselves into electronic crammed cockpits, hurtle billion-dollar aircraft against concussive G-forces, evade radar behind electronic cloaks,...

Published by Thriftbooks.com User , 13 years ago
This book offers an easy going insight into a gifted medicine man, who worked on the Southern Pacific railroad as a brakeman. This man was a gifted spiritual leader and healer, and was loved by many. The folksy way this book was written was more appealing to me then other books about him. The setting seems to be in the sixties for the most part, which was an exciting time for me and others. Indian respect and tradition was more accepted by the young back then. I myself being from native American lineage can testify to this fact. I didn't get to meet the man but have the privilege to share an occasional phone call or e-mail with his son "Spotted Eagle" who is also featured in this book. As some one who shares the belief system associated with Native tradition, I recommend this book for some eye opening revelations. -thunderhands

A meditation on life

Published by Thriftbooks.com User , 21 years ago
Rolling Thunder was written in a way reminiscent of the Castaneda books, but to me it was fresher, more concise, and more believable. We see Rolling Thunder, a.k.a. John Pope, a medicine man of the Cherokee tribe, from the perspective of Doug Boyd, a researcher from the Menninger Foundation (in Topeka, Kansas-my hometown). In 1971, Boyd sought out Rolling Thunder to ask for his help in a study on mind-over-body control that began with East Indian mystic Swami Rama. In the process, he was drawn into the world of the Native American, fighting against violations of rights and treaties, seeking harmony with others and the earth. Rolling Thunder is a remarkable man. To him, speaking with the animals and affecting the weather is within the realm of possibility. Boyd takes us on a sober ride, describing events simply as he observed them. As any true student of self and nature knows, though, it's not the powers that matter, but rather the way of life, harmony with oneself and others, and the deeper energy in things. And from Rolling Thunder's mouth we receive some words on all of these things-on paying attention, on living in accord with surroundings, on having a good attitude no matter what happens. Not only does all of these seem more accessible than Castaneda's writings, but combined with the effort to raise awareness of the plight of reservation Indians, and the call to stop harming the earth, it seems more relevant. The book is a series of episodes and dialogue, written in such a way that the language conveys the spirit of simplicity and doesn't get in the way. The plainness may deter some readers, though, if they are looking for action and demonstration of powers. The voice is quiet and hopeful; the book is almost a meditation.

Published by Thriftbooks.com User , 21 years ago
This is a book you will not be able to put down and will want to read every word. Great book for really making you think about spiritual issues.

An inspiring journey into the Native American spirit.

Published by Thriftbooks.com User , 22 years ago
I recommend this book to all those who wish to expand their own spiritual insights. From communing with nature, to unlocking the great depths of what spirit can accomplish. Rolling Thunder heals you body and soul.

excellent representation of the Man

Published by Thriftbooks.com User , 22 years ago
I just loved the book...read it about 5 years ago, and it was wonderful then, think I might read it again...
Copyright © 2022 Thriftbooks.com Terms of Use | Privacy Policy | Do Not Sell My Personal Information | Accessibility Statement
ThriftBooks® and the ThriftBooks® logo are registered trademarks of Thrift Books Global, LLC