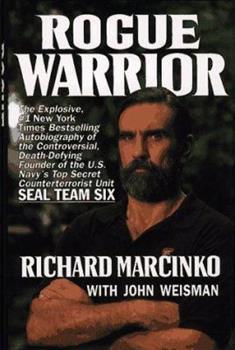 (Book #1 in the Rogue Warrior Series)

by Richard Marcinko and John Weisman

The author describes his career with the Navy's first anti-terrorist unit.

Published by Thriftbooks.com User , 22 years ago
CDR Marcinko bears all in his first book of a widely successful series. As the first Commanding Officer of the highly secretive Seal Team 6, his adventures took him across the globe. The reader is included in the story in the clever style of writing that Marcinko delivers. He "talks" to you, as though he were standing right beside you. But Marcinko is not Rambo. He is not invincible, nor does he think he is. His adventures leave him (and his team) battered and bruised. In an embarrasingly blatant story about himself, he leaves out the hype and glory, and instead finds himself slammed, smacked, dropped, whacked, dinged, scraped, and coming back for more. He tells how his missions consistently go FUBAR, and how the everpresent Command Master Chief Murphy (of Murphy's Law fame) is along for the ride to ensure all his plans are ruined. His "shocking" language is just what you'd expect from a mustang sailor. This book is not a Hollywood creation... it's not even a movie (yet). If you want to hear it from someone who was there, this is it. This book is a ride.

Published by Thriftbooks.com User , 22 years ago
I have actually read all of Capt. Marcinko's books to date; however, this book is the best by far because its his true-life adventures in the World Of SPEC War. Growing up not too far from where Capt. Marcinko was born, I became fascinated with his story. To read of his adventures and his antics and to see what was done to him in return is unbelievable. What makes it scary is that it is true. I'm not going to go into the scemantics of the writing style or break down the entire book for you, but what I am going to do is tell you the truth... Yes, this book may be hard for some of you to read. Yes, he may be an egocentric adrenaline junky, but first and foremost, he is a soldier, who has served his country and fought for the freedom we all take for granted. In the times in which we live, we need a true hero like Dick Marcinko to make us proud to be Americans, because we have so few hero's to look up to now. If you don't like his abrasive philosophising and his "take the world by the balls" attitude then all I have to say is "Doom on You". Dick Macinko is a true hero and a present day warrior and its men like him who have served our country in times of need, and who have fought and given up their lives for our country, that makes me proud to be an American.
Trustpilot
Copyright © 2022 Thriftbooks.com Terms of Use | Privacy Policy | Do Not Sell My Personal Information | Cookie Preferences | Accessibility Statement
ThriftBooks® and the ThriftBooks® logo are registered trademarks of Thrift Books Global, LLC