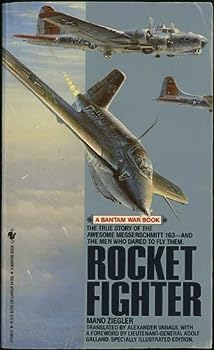 This book contains 73 illustrations including two pages in full color of the world's first operational rocket-powered interceptor, the Me163. This description may be from another edition of this product.

Published by David , 1 year ago
An outstanding WW2 memoir by one of the pilots of the German ME163. Many lively personal stories and insights that give the reader a real sense of what it was like to be involved with this project at the end of the war. A fast and interesting read.

Published by Thriftbooks.com User , 15 years ago
Since you've stumbled onto the product page of this rather obscure, out of print book, then you must be interested in one or more of: Aviation, World War II, German WWII strategies/machinery, Rockets/Jets, Courageous men. You MUST read this book. I just finished it, and can't recall when I last stayed up too late so many times reading, or read an entire book in so few sittings and with so much anticipation. This is a non-fiction work focused on the development, testing, manning and deployment of WWII Germany's Messerschmitt 163B Komet rocket-powered fighter interceptor. The concept of the program: a group of ultra fast fighters stationed at fields along Germany's border could launch on extremely short notice and quickly fly to high altitude to intercept and play havoc with incoming Allied bomber formations. Strike fast, move though the bomber formation at high speed, firing on target, then glide back to base. A bevy of facts and superlatives regarding the aircraft - At introduction, it was the fastest and fastest-climbing manned aircraft on the planet . . . propelled by a liquid fueled rocket (no oxygen intake involved), it was a self-contained bomb. They could, and did, just BLOW UP . . . once ignited the small but heavy aircraft took off, jettisoned its wheels and flew towards the heavens until fuel was depleted. The then lightweight glider would return to a soft landing on smooth grass via the belly-mounted skid . . . as a fuel-less glider, they were nimble, fast and a joy to fly . . . to return with fuel unspent invited death . . . engine failure usually meant returning with unspent fuel . . . landing the "glider" was a single opportunity event. To muff the "soft landing", or miss the "smooth grass field", invited death . . . no ejection seats, but jettisoning the cockpit cover and jumping out of the moving aircraft was commonplace . . . the rocket fuel "melted" flesh . . . there were fuel tanks located in the cockpit . . . there were dozens and dozens of completed Komets in inventory, without pilots. To say that this was a "remarkable" or even a "fantastic" story, sells it short as a true story. The real tale of course, is that of the men who flew the 163's. Author Mano Ziegler was one of these, in the program from almost the beginning to the end. His "luck" was unusually strong, and (as I recall from the book) he made it through to the end of the war with only a few broken teeth. In addition to an unparalled tale of men and machines, the reader is also privy to the author's (as a German military officer) perspective of THE WAR. No animosity is voiced toward to western Allied Forces and the increasingly punishing bombing raids on Germany. Ziegler is self-effacing, factual, generous and has a pretty good sense of humor (perhaps in a German sort of way, and there is no doubt something literally "lost in the translation"). In fact, with the exception of a single superior officer, Zieger speaks positively about all of the pers

Needs to be reprinted

Published by Thriftbooks.com User , 15 years ago
This is the true story of the underappreciated heroics of the engineers, builders, technicians and above all the pilots who tested and flew the Me163. This should be a required reference book in all engineering courses, not only for what was done right but also for all the things that were done wrong -- mostly caused by limited resources and time, and not a few stupid bureaucrats. (See also "Slide Rule" by Nevil Schute; the two books should be sold as "Better Together.") This is a bit of history that deserves a much larger audience.

Published by Thriftbooks.com User , 16 years ago
This book gives a pilots' account into the ME-163 Komet - one of the most incredible aircraft ever built. This is not a war story in essence, but a story of the pilots who befriended one another through one of history's darkest chapters. You'll have a hard time putting it down. It's a story of a plane that was 10 years ahead of its time, built by a genius named Dr. Alexander Lippisch. It didn't make a difference in the war but remains one of the most amazing and unique airplanes of all time.

Published by Thriftbooks.com User , 17 years ago
A co-worker loaned me his paperback English copy around 1990. As a pilot and aviation enthusiast, I found Mano Ziegler's account of flying the Messerschmitt Me 163 Komet fascinating. The tail-less Me 163 was the world's only operational rocket-powered interceptor aircraft. Photos and diagrams in the book were helpful in understanding how the plane worked. The Luftwaffe pilots who flew this tiny machine risked their lives with every test flight, training flight and combat sortie, even more so than Chuck Yeager did when he flew the Bell X-1 through the sound barrier and into the history books. Their rubber-coated flight suits provided only limited protection against the caustic rocket fuel; some pilots died in otherwise survivable crash landings when the fuel system ruptured and sprayed the cockpit. Thanks to Mr. Ziegler for telling about a little-known aspect of aviation history.

Published by Thriftbooks.com User , 20 years ago
When I read this book, some 30 years ago -it was translated into several languages, and I must have read either a Dutch or an English translation- two things struck me: the illustrations, made by the writer himself and the story, a real first hand experience. It's told in such a way that you don't want to put it down, you just have to known whether the pilots mentioned will survive this plane. You get to know how the testing was done and just what the hazzards of flying the Me 163 "Komet" were. Quite often it develloped into a real comet, exploding when landed with a bit of both fuels left. The writer manages to bring back those moments in vivid detail.
Trustpilot
Copyright © 2022 Thriftbooks.com Terms of Use | Privacy Policy | Do Not Sell or Share My Personal Information | Accessibility Statement
ThriftBooks® and the ThriftBooks® logo are registered trademarks of Thrift Books Global, LLC