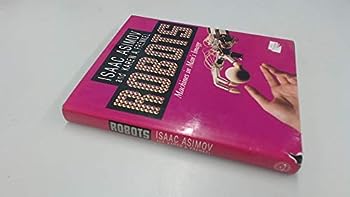 This illustrated examination of the origins of robots traces their development from the first medieval clockwork figures to current models capable of performing tasks that range from welding car... This description may be from another edition of this product.

Published by Thriftbooks.com User , 13 years ago
A Standard quality reprint anthology, at 3.50. There are some fine stories here such as PKD's Second Variety, and the Waldrop Sun Up teamup, among others, but several of the average variety, too. Robots : The Tunnel Under the World - Frederik Pohl Robots : Brother Robot - Henry Slesar Robots : The Lifeboat Mutiny [AAA Ace] - Robert Sheckley Robots : The Warm Space - David Brin Robots : How-2 - Clifford D. Simak Robots : Too Robot to Marry - George H. Smith Robots : The Education of Tigress McCardle - C. M. Kornbluth Robots : Sally - Isaac Asimov Robots : Breakfast of Champions - Thomas A. Easton Robots : Sun Up - A. A. Jackson & Howard Waldrop Robots : Second Variety - Philip K. Dick Robots : The Problem Was Lubrication - David R. Bunch Robots : First to Serve - Algis Budrys Robots : Two-Handed Engine - Henry Kuttner & C. L. Moore Robots : Though Dreamers Die - Lester del Rey Robots : Soldier Boy - Michael Shaara Robots : Farewell to the Master - Harry Bates Brain capacity reduction circuit. 3 out of 5 Violent end. 3 out of 5 Droning on defeat. 4 out of 5 Project Lightprobe robot explorer crazy. 3.5 out of 5 Robot defense. 4 out of 5 Little metal bastich. 3.5 out of 5 Want it all woman botromise. 3.5 out of 5 Robocar protection. 4 out of 5 Robot warrior. 3 out of 5 AI's Orion ramjet jumpstart supernova surf return. 4.5 out of 5 If there's a bear in there, you are rooted. Out there isn't good, either, in the long run. 4.5 out of 5 Needs Oiler. 2.5 out of 5 Soldier prototype problems. 3.5 out of 5 Fury killing. 4 out of 5 Plague Ship robot rebuild. 3 out of 5 Take the monkey thing home. 3 out of 5 Gnut our ship, you gorilla. 3 out of 5 3.5 out of 5

Published by Thriftbooks.com User , 18 years ago
This book talked about everything I needed to know about robots. It covered everything from the creation of robotics till' the engineers who have created them. It gave me a complete and total history all the way back to the early 1700's. This book was entertaining, yet educational at the same time. Once I read the first chapter I didn't want to put it down. I really didn't know that robots had evolved that fast, but by reading this I know that robots can control a lot more than I ever thought. This book even covered the modern day goal, creating artificial intelligence. The famous book Frankenstein started a lot of beliefs of creating artificial intelligence. There certain reasons why we haven't been able to create A.I. yet one of the main factors are because, a brain is extremely complex. The human brain contains 10 billion neutrons and up to ten times as many supporting cells. After reading this book I think the most interesting thing was the engineer, from the 1700's, Jacques de Vaucanson's creation. He had created a mechanical duck that could quack, bathe, drink water, eat grain, and the digest. He had used it to try to collect money for him trying to create A.I. But I recommend this book to everyone who really is into the history of technology, because I found it a really easy read and it doesn't make you think too much because it has already given you all the information.
Trustpilot
Copyright © 2022 Thriftbooks.com Terms of Use | Privacy Policy | Do Not Sell My Personal Information | Accessibility Statement
ThriftBooks® and the ThriftBooks® logo are registered trademarks of Thrift Books Global, LLC