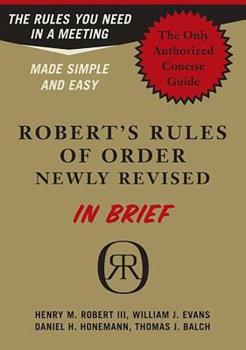 Robert's Rules of Order in Brief: The Simple Outline of the Rules Most Often Needed at a Meeting, According to the Standard Authoritative Parliamentary Manual, Revised Edition

Going to a meeting? Want to know how to take part? Learn quickly and easily! This short, simple book includes: Sample dialogues to get you confidently through motions, nominations, elections, votes, debates, amendments, and more Invaluable tips for keeping meetings orderly and on track A chapter answering the most frequently asked questions Not sure what to do at a meeting? Handy tables at the back of the book tell you just what to say Appointed to...

Published by Thriftbooks.com User , 15 years ago
A nice, concise, well-written summary which should be useful for all members of organizations which hold meetings.

Published by Thriftbooks.com User , 19 years ago
Many people will recommed other parliamentary authorities whose primary benefit is that of being shorter. Other authorities I've read ("21st Century Robert's Rules" and "Riddick's Rules of Procedure") are shorter because they've left out substantial parts, or don't include useful examples.Some other authorities, like Ray Keesey's "Modern Parliamentary Procedure" do not actually reflect current (or past) parliamentary practice, but attempt to redefine procedure based on the author's own bias. Robert's Rules are more obviously the result of centuries of practice, and use.This book will not get you up and running overnight, but it is indispensable to anyone with a desire for a comprehensive understanding of parliamentary law. And even though it is a more massive work, part of the extra material is instructive on shortening your meetings by acting more efficiently without abridging anyone's rights.

Published by Thriftbooks.com User , 21 years ago
I first came into contact with this book during the summer between my freshman and sophomore years of high school. I was going to be participating in something called Student Congress in the fall, and although I had never heard of it before, all of my teachers and teamates told me to get a copy of Robert's Rules. Not knowing of any of the "watered down" versions that existed, I simply purchased the official copy. Having cut my teeth on that copy (dutifully reading the entire book that summer) I have little sympathy for people who shy away from it because it's too complicated :-) But honestly, this book has become a source of pride to me. Although I have been criticized for perhaps too zealously insisting on adhering to the rules in the book, I am also accepted as a Parliamentary expert and some have remarked I know more than the Parliamentarians who run our exercise (although I would be loathe to admit that, they are very intelligent people). Anyway, given a proper forum Robert's Rules of Order have been a very rewarding thing for me, as they have given me something to study and learn and be recognized at, and I intend on buying all future editions of the text to make sure I stay on top of any developments. Truly the best book of its kind!

The best book of its kind.

Published by Thriftbooks.com User , 22 years ago
This is the one indispensable book to have at all of your meetings. In over 20 years of being a parliamentarian and 15 years as a teacher of Rules of Order, I have not found a better reference. If you're just learning, you might want to get a simpler, abridged version as a primer - just to let you know what is most important. It won't be long, however, before you'll want this book to use as a real tool to help meetings run more efficiently, in a shorter period of time and with a minimum of disagreements. It will also help you with those "problem" people at meetings. If you don't know Rules of Order you're at the mercy of those who do, or more often, those who pretend to.

recognized as the current and official edition

Published by Thriftbooks.com User , 23 years ago
Question: Which edition of Robert's Rules is official? Aren't they all the same? Which one do professional parliamentarians refer to? Answer: The National Association of Parliamentarians, and the American Institute of Parliamentarians, only recognize one book as the current official parliamentary authority: Robert's Rules of Order Newly Revised [2000 tenth edition, Perseus] Everything else is old, or a variation. The bible of parliamentary law, it is this edition that your bylaws probably mentions, not the 1876 original text, like some publishers are selling. Be forewarned, it is literally a book of rules, and not easily absorbed. -- You may have to learn what's practical for your average meeting by a simpler beginners book. If you want simple, go elsewhere; if you want complete, this is it. No other book is ADDING things to Henry M. Robert's original classifications & rankings (it's 700+ pages!), only shortening & simplifying & rephrasing.
Copyright © 2020 Thriftbooks.com Terms of Use | Privacy Policy | Do Not Sell My Personal Information | Accessibility Statement
ThriftBooks® and the ThriftBooks® logo are registered trademarks of Thrift Books Global, LLC