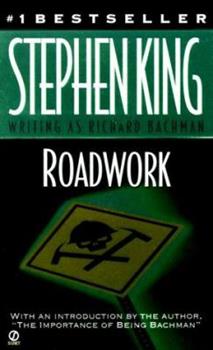 What happens when one good-and-angry man fights back is murder--and then some.... Bart Dawes is standing in the way of progress. A new highway extension is being built right over the laundry plant where he works--and right over his home. The house he has lived in for twenty years...where he has made love with his wife...played with his son.... But before the city paves over that part of Dawes' life, he's got one more party to throw--and it'll be a...

Push me over the edge

Published by Thriftbooks.com User , 15 years ago
how much can one person take?Especially one with an attitude that can lead to the unthinkable?... Here is a detailed review:The story takes place in an unnamed New England city in the 1970's. Barton George Dawes, grieving over the death of his son and the disintegration of his marriage, is driven off the deep end when he finds that both his home and his business are going to be condemned to make way for the construction of a new interstate highway. In the introduction to the novel in the collection The Bachman Books King states his disappointment with the work and that a lot of the novel's seemingly melodramatic touches were attempts by him to come to terms with his own mother's death around the time of writing. King states that he was in two minds about reprinting it but decided to in the end in order to give readers an insight into his personality at the time. Oddly enough, in the introduction to the second edition of The Bachman Books (entitled "The Importance of Being Bachman") King referred to Roadwork as his favorite among the Bachman books. In the introduction to the first collected works The Backman Books, King states in his essay "Why I Was Bachman", "I think it was an effort to make some sense of my mother's painful death the year before - a lingering cancer had taken her off inch by painful inch. Following this death I was left both grieving and shaken by the apparent senselessness of it all... Roadwork tries so hard to be good and find some answers to the conundrum of human pain...enjoy..Nigel

Published by Thriftbooks.com User , 15 years ago
This novel is slow, but it kind of reminded me of Catcher In The Rye, and I think that's because of the depressed mood the character happens to be in throughout the entire novel. It's actually quite interesting how Stephen King was able to come up with this novel. The novel is about a man who loses his job, his wife, and ends up losing his sanity, because his entire world has crumbled around him. Yes, it's a bit depressing, but it still happens to be an entertaining read.

King's "mainstream" novel should not be overlooked

Published by Thriftbooks.com User , 16 years ago
I think it's safe to say that Roadwork is King's least-read novel, largely because it represented an attempt on King's part to go straight, to prove he could write a mainstream novel. Written in between 'Salem's Lot and The Shining, Roadwork was released in 1981 as Richard Bachman's third novel. I first read it as a young teenager, and I no longer remembered a great deal about it - except that, at the time, I did find it somewhat boring. King himself has never gone so far as to call Roadwork a good novel. Reading it again now, though, I was surprised by the sophistication and emotional power of the story. You almost have to have experienced some of the pressures of adulthood to really relate to the protagonist, Barton George Dawes, and it really doesn't matter that the story is imbedded in the socioeconomic worries of the early 1970s. In its essence, Roadwork is the story of a man pushed beyond his means of coping with change. On the face of things, Dawes doesn't have it that bad. He has a good wife, a good job, and friends. Inside, though, he is suffering miserably - and has been since his little boy died of a brain tumor three years earlier. Having never allowed himself to grieve properly, his mind proves unable to bear the disruptions caused by a new local road construction project. He's worked for the same laundry since he got out of school, and it will have to relocate elsewhere because of the roadwork - and he is the one responsible for finding a new site. He's lived in the same house since he got married, and it too has a fateful date with a wrecking ball - and he has to find a new home for him and his wife. It's just too much for him, and he can't do it. He lets the deal fall through on the new laundry site, which costs him his job, and he doesn't even go looking for a new house. Haunted by dreams of his dead son, he's already a broken man - even before he loses his wife and basically his whole life. We the readers basically watch Bart Dawes go insane as the days pass. We watch him lie to his wife and to himself, drink himself into nightly stupors, procure destructive objects from dangerous men, and plot revenge on those who have taken away the few things in life he could cling to. At the center of his problem is Charlie; George can't understand why his son had to die, and he can't bear the thought of his home, Charlie's home, being destroyed. The plot is somewhat analogous to that of the film Falling Down. Even as we watch Dawes do some terrible things, we can't help but sympathize with a man so beaten down by the cruel vagaries of life. King has said that Roadwork was in some ways a product of the death of his mother. After working hard to raise King and his brother single-handedly, she died just as King's material success as a writer was beginning. The book served as a vehicle to let him work through his own emotional issues over his loss. Why does a loved one have to die? That question permeates this novel.

I've Got Southern Comfort!!!Who Needs A Job Or A Wife?

Published by Thriftbooks.com User , 16 years ago
This book is set during the Oil Embargo of the 1970's. The reader is introduced to yet another one of King's "Beautiful Losers" Bart Dawes. Bart has managed to deliberately get fired from his job at the local laundry and as a consquence has thrown away his mariage as well. The reason for this is that the City is planning to build a road where his house is standing. Instead of selling his house to the City for a grossly overinflated price Bart decides to make a stand and drinks endless bottles of Southern Comfort and blows up roadwork machinery.For some reason King presents all of this in a romantic light. However I fail to see how the self destruction of a man is in any way "romantic".I give this book 5 stars because it didn't get to the Bestseller List until King released the book under his own name.

There was bound to be a split decision on this one

Published by Thriftbooks.com User , 20 years ago
There are really two classes of King readers. The first are the early-career lovers. These are people who like suspense (though I have yet to learn how you get that from a forum where the subject controls the pace) and raw plot motion, and there's nothing wrong with that, but it's definitely not a very rich or complete approach to take. The second group are the late-career fans of work like Hearts in Atlantis and Desperation, who generally give a more deep and introspective read to the work and aren't as concerned with things moving along at a brisk clip. For those who may be wondering, I am probably best classified as one of the latter.The first group will hate this novel. Rather than being a continuously moving story about a collection of things happening to people, Roadwork is essentially an examination of the destruction of one man. And let me tell you, that character examination is SUBLIME. The only character that I have read in a King work who was clearly better defined was Johnny Smith from The Dead Zone, and this book would best be compared to that earlier work.There is very little to be bored with in this book if you're not worried about things always happening. If you are, you might be better advised to move on and leave this one alone--there aren't a lot of bodies or explosions. The atmosphere and characterization, however, are superb. I read this as part of the Bachman Books, which have regrettably been taken off the market as a set, and I was impressed by the depth and expression that King managed in this side-project (not reflected in his other work under the pseudonym).There are problems with this book, though. For one thing, it is absolutely mired in the seventies. Younger readers may get lost trying to relate to such a thing as an oil embargo. To some extent, that intrinsic association holds back the novel by keeping the contemporary reader from truly getting a feel for the environment, but it didn't hurt me too much (and I was born after the whole embargo thing was resolved).I find nothing more refreshing than seeing an author liberating himself from a genre where he had previously been caged up, and King does that in this book. Instead of incorporating elements of fantasy, as he is so often wont to do, he stuck with reality in this story, and it pays off. You can see the faces of some characters you encounter further down the line, as well, particularly in the mobster (who later became a character in Thinner, after a name change and some tweaking, I imagine). This is a masterpiece of TRUE Stephen King writing, and I don't miss the usual fantastic elements at all. I'd recommend this for anybody looking for a good read.
Copyright © 2020 Thriftbooks.com Terms of Use | Privacy Policy | Do Not Sell My Personal Information | Accessibility Statement
ThriftBooks® and the ThriftBooks® logo are registered trademarks of Thrift Books Global, LLC