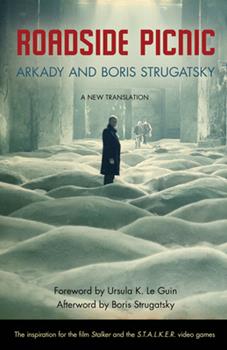 Red Schuhart is a stalker, one of those young rebels who are compelled, in spite of extreme danger, to venture illegally into the Zone to collect the mysterious artifacts that the alien visitors left scattered around. His life is dominated by the place and the thriving black market in the alien products. But when he and his friend Kirill go into the Zone together to pick up a "full empty," something goes wrong. And the news he gets from his girlfriend...

One of my favorite books:

Published by Thriftbooks.com User , 14 years ago
***This comment may contain Spoilers*** "Picnic na obochine" aka "Roadside Picnic written by the most popular among the Soviet readers of many generations writers in the genre of Science Fiction, brothers Arkadiy and Boris Strugatsky is much more than science fiction. It can be viewed as dark satire and anti-utopia as well. What is important, it is a very well written book which I've read many times and will read again. The alliens have briefly visited Earth (perhaps for an emegency stop or for a picnic as the title suggests) and left behind many strange and unusual items, some of them funny and useful, some - dangerous and even deadly. These items became so popular on a black market that many people were ready to pay a lot of money or to risque their lives for them. The most desirable and mysterious of all was "Golden Sphere" that could grant any wish but nobody ever was able to reach it. Among stalkers, the persons possessing knoweledge of the area and its dangers, there was Roderick (Red) Schuhart, the main character of the book, He was not a saint; he was a human being with a lot of weaknesses. Red possessed inhuman intuition and luck that had helped him to survive the multiple trips to the Zone. But the Zone caught up with him in the end, and he was paying the ultimate price watching how his only child who was born as a beautiful and joyful girl was turning into the strange and mute animal. That was why Red decided to make the last trip to the Zone and find the legendary Golden Sphere. Red knew he could not go alone because just when you thought that you reached the Sphere there was an ultimate trap that could only be fed by a human being. Such great and desperate was Red's desire to get his daughter back that he took with him an innocent young man, teenager really, perfectly knowing that the man will never return from the Zone. Red found out that after he finally reached the Sphere, he did not know what and how to ask; his only hope was that the magic tool would reach inside his soul and find that his soul was still alive and bleeding from pain and begging for his daughter and for forgiveness. Andrei Tarkovsky took the final chapter of the book and used the idea of the last trip for the film "Stalker" He himself along with the Strugatsky Brothers had rewritten the screenplay many times until he was satisfied with it. As much as I respect Tarkovsky and admire his films, I am not a fan of "Stalker" and I'd prefer if he had adapted the final chapter the way Strugatsky Brothers wrote it. I found the last chapter of the book much more interesting, deeper, and tragic than all the debates among the characters and monologues of the Stalker and his wife in the film.

Published by Thriftbooks.com User , 18 years ago
The Strugatsky brothers wrote fiction with a slant readers won't find in any western works in the genre. Roadside Picnic is one of the most imaginative. A brief visitation to our planet from some unknown place by unknown beings for reasons incomprehensible. Six locations on the face of the globe, positioned as though someone fired a pistol at it from space as it turned, are permanently changed, studied and fought over by humans. The storyline involves a 'stalker', a young man who was a child in one of the areas at the time of the visitation, who then spends the remainder of his life sneaking past guards and barriers risking his life in bizarre expeditions to remove and blackmarket artifacts. His trails into the hometown of his birth are marked by piles of clothing of other less-fortunate stalkers, guideposts of danger spots. The activities then lead him into prison sentences and an alienation from the bulk of humanity that only the Strugatsky brothers might visualize. If you love good science fiction you'll love this book. If you don't love science fiction you'll still love it. You'll probably also form a desire to read their other contributions. If so, you are in for a difficult pursuit. These tomes are rapidly becoming obsure.

Published by Thriftbooks.com User , 19 years ago
This is the best sci-fi novel I've ever read. I read sci-fi for twenty years before a Russian friend turned me on to this book. It stirred up thoughts and emotions within me that I've never before experienced. The book is so powerful that it was banned in the Soviet Union, yet fans would manually retype the manuscripts for distribution along a chain of Strugatsky fans. All I can say is this book belongs in the library of anyone who considers him or herself a fan of literature.-- JJ Timmins

Published by Thriftbooks.com User , 21 years ago
At the moments like this I feel privileged to be a native Russian speaker. Brothers Strugatsky would have been perhaps not less famous than Heinlein, Clark, and Orson Card, if not for the language and cultural barrier that devided the former USSR from the rest of the world. This is a brilliant book about humanity and being humane. Not a very joyful reading cause it explores deep social issues. I wouldn't trace this fascianting allegorical society to the Soviet Union of then, but all and all the general atmosphere of hopelessness and despair is very typical for the last "great empire". This book is an absolute must to everyone who takes pride in loving Sci-Fi!

Excellent, but not the only excellent book of Strugatsky

Published by Thriftbooks.com User , 22 years ago
It was the first book of A. & B.Strugatsky I've read when I was 16. After that I have re-read it 5 or 6 times... Brilliant thing about the meaning of life, about the place of human being, about happiness and despair. We, Russians, use to call this style "social phantasy", not SF. You can understand this, if you understand in what country this book was written. Developing the theme of postcommunist society, authors have created their own world, and you can find a lot of analogies and heroes that are common for some other books of them. Yes, Picnic is one of the best, but don't stop - there are other exciting works...
Copyright © 2020 Thriftbooks.com Terms of Use | Privacy Policy | Do Not Sell My Personal Information | Accessibility Statement
ThriftBooks® and the ThriftBooks® logo are registered trademarks of Thrift Books Global, LLC