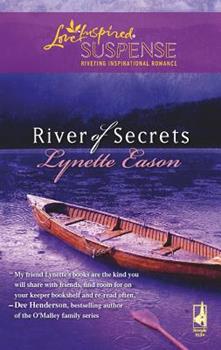 (Book #2 in the Refuge from Danger Series)

Amnesia and danger collide in this classic tale from bestselling author Lynette Eason The amnesiac patient in the makeshift Amazon hospital looks familiar to visiting American nurse Amy Graham. This isn't the first time she's seen those blue-gray eyes, the hard lines of his handsome face. When Amy sees his birthmark, she knows exactly who he is: Micah McKnight, the presumed-dead Navy SEAL. Her best friend's brother. The man her own mother set up to...

It's no secret...this is a great book

Published by Thriftbooks.com User , 13 years ago
The story centers around Amy Graham (Cassidy's best friend from Lethel Deception) and Micah McKnight (Gabe's best friend and fellow SEAL from Lethel Deception). Amy's mother was the villian that set Micah up to be killed along with many other SEALS. He is pulled from an explosion/fire and was in a coma for 11 months. Amy was compelled to return to the jungle and help the orphans as a way to make amends for the awful things her mother had done. While she is helping out there she is also helping "Juan" recover. Juan doesn't remember who he is or anything about his life. They are drawn to each other and soon Amy realizes that it's Micah McKnight who was thought dead. Several attempts are made on his life. Who is trying to kill him and why? How does Amy tell him who he is without also telling him that it was her mother who set him up? Will he hate her once he finds out? This story kept me turning pages. I thoroughly enjoyed the adventure and recommend this to anyone who likes Dee Henderson. You can read it as a stand alone but it's a much fuller story when you read Lethel Deception first. Looking forward to Holiday Illusion!
Trustpilot
Copyright © 2022 Thriftbooks.com Terms of Use | Privacy Policy | Do Not Sell My Personal Information | Accessibility Statement
ThriftBooks® and the ThriftBooks® logo are registered trademarks of Thrift Books Global, LLC