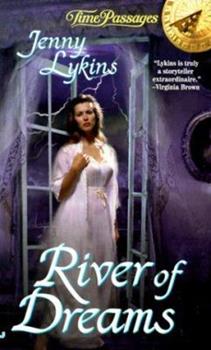 (Book #2 in the Dreams Series)

A brand new Time Passages romanceBaton Rouge, Louisiana, 1999. Brianne Davis thought a seance would liven up her busy life. But now she's haunted by the persistent voice of a lovestruck ghost! Baton... This description may be from another edition of this product.

Published by Thriftbooks.com User , 13 years ago
This book was a very good read indeed. If your bored, it's cold outside or a rainy day, this book is perfect! It's about a young lady Brianne living in the present day that goes to a seance and meets a handsome (ghost)named Griffen who call's the heroine Brianne by another name "Amily". During a freak thunderstorm the heroine (Brianne) finds herself catapulted back in time and low and behold there is the handsome ghost Griffen but in the flesh! How did she get there? Who is the the handsome man with haunting blue eyes and how does she get back home in the present time? Great story and it took me two days to finish! I hope you enjoy!

Published by Thriftbooks.com User , 21 years ago
In present day Baton Rouge, Brianne finds herself haunted by a handsome spirit who has occasionally spoken through her best friend David since they attended a séance. When things become too intense something happens to Brianne. She is transported back to 1832 and into the presence of the handsome flesh and blood stranger AND if that isn't enough she lands in the body of the one woman who can't have him.A lot happens once she is transported and becomes Amily. Some readers will be accepting of the many coincidences and the explanations and some may not. But that's the idea of alternatives romances... there are no rules. I found it humorous, fun and entertaining. She also has two other Time Travel Romances: ECHOES OF TOMORROW and LOST YESTERDAY

Published by Thriftbooks.com User , 22 years ago
This is a great sequel to Distant Dreams, and even though I read River of Dreams first, I enjoyed both books more than any in a long time. I love the way this author gets you to feel the emotion.

Published by Thriftbooks.com User , 22 years ago
Ms. Lykins keeps getting better with every book. I loved the way she had this book connected with Distant Dreams, which was set two years earlier. This is one author who always leaves me surprised and satisfied! Another great one, Ms. Lykins! Keep them coming! Please!

Published by Thriftbooks.com User , 22 years ago
In Baton Rouge, David Marks asks his long time friend Brianne Davis to accompany him to a séance that his fiancée and her psychic are hosting. David figures Brianne is the only person he knows who will find the humor in all this. After working very hard, Brianne thinks attending the séance will be a diverting form of entertainment. At the séance, Brianne sees a ghostly figure of a male pleading with her to return to him. The specter kisses her leaving Brianne haunted by his image until lightning strikes and she finds herself in 1832 Louisiana in the body of someone named Amily. Adding to her disbelief is that her kissing ghost turns out to be Griffin, a flesh and blood, handsome living man. As Brianne struggles with handling difficult situations, she realizes that she, like her host body, is falling in love with Griffin. However, he is married to Amily's cousin and Brianne knows she belongs in the late twentieth century. RIVER OF DREAMS is an enjoyable time travel romance that uses reincarnation as the passage into past lives. The story line is fun as Brianne struggles with her feelings and her dislocation seems genuine. Jenny Lykins is becoming one of the sub-genre's best authors with compassionate novels like this one and tales like ECHOES OF TOMORROW and LOST YESTERDAY.Harriet Klausner
Trustpilot
Copyright © 2022 Thriftbooks.com Terms of Use | Privacy Policy | Do Not Sell My Personal Information | Accessibility Statement
ThriftBooks® and the ThriftBooks® logo are registered trademarks of Thrift Books Global, LLC