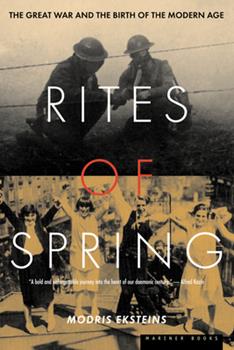 Rites of Spring: The Great War and the Birth of the Modern Age

A rare and remarkable cultural history of World War I that unearths the roots of modernism Dazzling in its originality, Rites of Spring probes the origins, impact, and aftermath of World War I, from the premiere of Stravinsky's ballet The Rite of Spring in 1913 to the death of Hitler in 1945. Recognizing that "The Great War was the psychological turning point . . . for modernism as a whole," author Modris Eksteins examines the lives of ordinary people,...

Published by Thriftbooks.com User , 15 years ago
Professor Ecksteins' book is, on one level, a history that places the Great War in the context of the popular cultural zeitgeist that produced it. While other books have analyzed the outbreak of the war from the perspective of politicians and diplomats, Ecksteins portrays it as a popular cultural upheaval. In this way, this book distinguishes itself from other histories of the period. On a deeper level, however, the book is a meditative essay on the problem of modernity. In a brief but elegant way, the author tells the story of how the West descended into aesthetic nihilism as it entered the 20th Century. At the turn of the 20th Century, Europe (in culture, art and thought) gave up on the prospect of reason and ethics, and placed all of its hope in aesthetics as an absolute standard of value. By abandoning the metaphysical True and Good in favor of existential Beauty, European culture freed itself to transgress all rules and restraints in pursuit of the tragic and the sublime. The author points out that this was as true on the battlefield as it was in Stravinsky. It was this cultural movement that enabled "total war" and set the tone for the century to come. The reason this book is so important today is that modernity has not left us; indeed, it has metastasized around the globe. While this book suggests no solution to our problem, it does help to explain how we got here.

A remarkable tour de force about The Great War

Published by Thriftbooks.com User , 17 years ago
I have read several books dealing with the First World War before, but none except for Paul Fussell's THE GREAT WAR AND MODERN MEMORY can match this brilliant book for its scope and brilliance. Other books deal with the nuts and bolts of history, but Eksteins is concerned with zeitgeist, both that which animated the birth of war and the way it was altered by that war. More than anything, Eksteins is concerned with the metaphysics of the war, or the metaphysics of the world that it transformed. The book is structured, like any good play, into three broad acts. The first deals with the world on the eve of the war, examining attitudes, especially aesthetic attitudes, in France, Germany, and England, before the onset of the war. The sections on the controversial debut of Diaghilev's production of Stravinsky's THE RITES OF SPRING (which obviously provides the book with its title), which deals in dance with a ritual blood sacrifice, are especially hypnotic. Act Two focuses on the war itself, and even if one has read previous and equally nightmarish accounts of that insane and pointless conflict, Eksteins will bring the war alive for the reader. One is especially impressed by the senselessness of the entire affair, so senseless that nonsense seemed to be at home there. World War Two at least seemed to make sense for the participants. Hitler and Tojo made the stakes all too clear, but the Great War was above all an affair of moral ambiguity, and Eksteins is brilliant at bringing this out, something that a purer historian like Martin Gilbert or John Keegan is ultimately unable to do, because he or she is limited by the task of the historian to deal with ethical and aesthetic categories. The final act deals with the world remade by the events of 1914-18. Eksteins focuses on three main aspects: Lindbergh's flight across the Atlantic, the publication of and response to Erich Maria Remarque's ALL QUIET ON THE WESTERN FRONT, and the rise of Nazism in post-war Germany. It is an interesting question what genre RITES OF SPRING belongs to. Eksteins offers too many insights that would normally exceed the job of the historian to label it simple history, though one could resort to calling it "intellectual history." It is that, but he also becomes in his book a bit of a moral chronicler. The book is more a work of art than a work of history. Although it contains no obvious narrative, it feels as if it has a plot. This is one of the more remarkable, haunting books I have read in recent years. Absolutely no one interested in the meaning of the twentieth century, and especially no one interested in the Great War should skip it. The only ones it will disappoint will be those primarily concerned with military strategy and body counts.

An Anatomy of a Suicide

Published by Thriftbooks.com User , 19 years ago
An Anatomy of the Great Suicide of the European Middle ClassesI found Professor Eksteins' book interesting in a number of ways. Unlike perhaps all other accounts of the start of the Great War, Eksteins' emphasises the actions of the crowds, "the fine days of that July and August encouraged Europeans to venture out of their homes and to display their emotions and prejudices in public, in the streets and squares of their cities and towns. The massive exhibitions of public sentiment played a crucial role in determining the fate of Europe that summer. Had it been a wet and cold summer, like that of the previous year of the next one, would a fairground atmosphere conductive to soapbox oratory and mass hysteria have developed? Would leaders then have been prepared to declare war so readily? There is evidence that the jingoistic crowd scenes in Berlin, St. Petersburg, Vienna, Paris and London, in the last days of July and in the early days of August, pushed the political and military leadership of Europe toward confrontation. That was certainly the case in Germany. And Germany was the matrix of the storm. . ." pp55-56.So instead of Pan-Germanism, or Pan-Slavism, or "Germany's Grab for World Power", or the clueless Kaiser signing a blank check to a conniving Hapsburg Empire, or a coldly calculating German General Staff knowing that time is against them, or a French-Russian-Serbian plot, that is all plays of grand power politics from on high, we see the old world leadership attempting to stay ahead of their respective raging publics, attempting to keep the frenzy from turning against them. . . interesting, and doubtlessly part of the story.The influence of artistic currents are interesting, but hardly new. Eksteins' thesis is similar in part to Werner Sombart's famous manifesto of German war propaganda of 1915, entitled "Merchants and Heroes". Obviously, for Sombart, the English were the merchants and the Germans the heroes, social carriers of two Weltanschauungen trapped in a fight to the finish, a struggle for the right to dictate the further course of "civilization" which was of course only Western in those days.Cultural pessimism had been around since Nietzsche as Ekstein points out and reached its height around the turn of the century. From that point it became more refined, discussed at length in the intellectual circles in Heidelberg, Vienna and elsewhere. Contrary to a dominant feeling of "German" exclusivity, besides all the regional sympathies and animosities native to Germany, there were also many influential German intellectuals, such as Max Weber, a friend of Sombart's, who saw Britain's political system as offering something of a model for a politically reformed Germany. The war and the frenzy which accompanied it made any such comparisons seem to recede in importance, to the presumed duty at hand. Later such pronouncements would be considered dangerous. To Weber's credit it should be pointed out that he argued publicly for dom

Published by Thriftbooks.com User , 21 years ago
Modris Eksteins "Rites of Spring" is already considered a classic by many after only slightly more than a decade in print. It's a daring *cultural* history of World War I; Eksteins' controversial thesis is that modernism caused the war. Usually the Great War is seen as the last gasp of old Europe and the sentimental Victorian age, and modernist angst was ushered in by the psychological impact of the bloodbath. Eksteins demonstrates that the savagery was in the air beforehand--the horrors were well underway in the minds of European artists and intellectuals before the first shot was fired. The title comes from Stravinsky, of course, who was one of those artists who glorified the idea of purgation through violence (they were playing with fire). The concept reached its logical conclusion with Joseph Goebbels' proclamation that war was "spring without end!" Eksteins writes in a cool but passionate style that is unusually compelling. This is a must read for history buffs and anyone who wants to know why the last century was a slaughterhouse.

Published by Thriftbooks.com User , 22 years ago
I found Ecksteins take on the first half of the twentieth century completely enthralling. Some arguments convince by logic and fact, others by force, others still by sheer eloquence. Ecksteins' work falls into the last category. And how does one defend it except by saying 'read for yourself'? Of course he may play fast and loose with events; his observations flit across the the century with the vitality and impulsiveness he attributes to the modern age itself. Basically, Ecksteins is trying to demonstrate how the Great War began as a clash or two great cultural ideas (a conservative one represented mostly by England and France, and a modernist, spritual one represented by Germany), and ended with Germany's defeat on the battlefield but the victory of her modernist spirit. these modernist sentiments were already in embryo in the years before the war, but particularly in Germany. The utter destruction and seeming senselessness of the war, its incongruity with everything we had thus far been led to believe in, assured continued life and well-being to the modernist "ethos". This ethos is difficult to explain but may be characterized as a concern with "life lived" rather than "life examined". The moment became predominant. Aesthetics took precedence over ethics, art over history. Within 15 years of the end of WWI these modernist notions resurfaced with a new terrible face, that of Nazism, whose cult of ultimate egotism, and a focus on spectacle in its mad dash to recreate the world, made it the most visible legacy of the birth of the modern. Hitler was a veteran of the trenches, this is no paradox. Ecksteins takes a very literary approach to history. Musical would be better imagery. Unconcerned with tables or statistics, Ecksteins composes a historical symphony; his text flows like music, at times with no seemingly logical connection to his facts other than that, flowing one into the other, they could not be otherwise. If you're a legalist at heart stay away. If you're a poet who loves history you may find yourself mulling over Ecksteins the way you hum an irrepressible tune.
Copyright © 2022 Thriftbooks.com Terms of Use | Privacy Policy | Do Not Sell My Personal Information | Accessibility Statement
ThriftBooks® and the ThriftBooks® logo are registered trademarks of Thrift Books Global, LLC